Crimea as a tiny continent is rich in contrasting landscapes. Unless the tundra and taiga can not be found on this peninsula, which can be bypassed in the summer. It is not limited to the almost tropical luxury of the Yalta mountain sub-Mediterranean as well as its almost boundless steppe. The gentle Black Sea, which embraces it almost everywhere, creates on its shores as if it were near, but from something strangely far away. And only modern means of overcoming space bring down all this in the accumulation of barely noticeable wonders, which leaves the average holidaymaker outside of summer vacation. 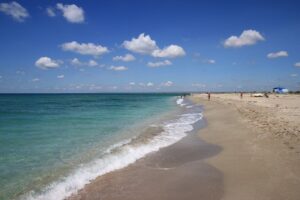 Those who traveled through the Western Crimea, and even just went from Simferopol to Evpatoria and, perhaps, further, he felt strange changes in the interaction of space and time. Especially if a person is already familiar with the South Coast, where each cape is like the latest work of art, each subsequent peak is clearly not like the previous one…

The steppe is flat, up to the horizon, and the sea, distant and brilliant, is somewhere beyond the edge. And, in addition to the slight rustling of tires, there is a ringing desert silence… And you can rush to Tarkhankut unnoticed, without knowing the purity of the white sands of Belyaus. 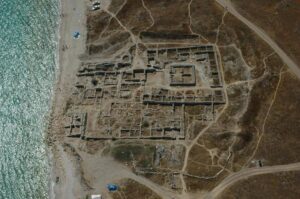 This is today, and two millennia ago there was a large city, and for many years archaeologists have been carefully excavating Belyaus. People lived in this city for 400 years before the beginning of the new era, and already in the new, Christ era, probably a hundred years. Carefully carved and fitted in the masonry of the former mighty battle tower fireplace blocks testify to the developed culture of construction. Yes, they were Greeks. The archeological glory of Belyaus attracts interesting people to it, and first of all it is known as a monument of antiquity. 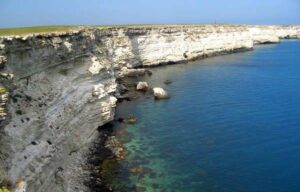 Pampered by the requirements for the comfort of rest, an ordinary holidaymaker does not come here. Nearby – a few small villages, behind – Evpatoria, 60 km to it, but Evpatoria – a completely different tale. And between her and Belyaus – Donuzlav. It should also be discussed separately, it is worth mentioning that it was a lake until recently. In the 60’s it was connected to the sea, breaking the bridge that separated them. Two braids were formed, the north-western of which is Belyaus.

Here is the cleanest sea in the Crimea. There is no silt in the sand, it is from shells ground by the sea, and this clean sand is slowly extracted and decorated by the Martian figures of two industrial lifting mechanisms. But their remote presence does not bother those who choose these places for rest. On the opposite side of the spit from the sea you can find a patterned shadow under the bushes of wild olives, and enjoy the silence and purity of the sea and the radiance of white sand. The rest must be brought with you. So this fragment of the mosaic of Crimean diversity is not for everyone to choose from, so there are few people here. 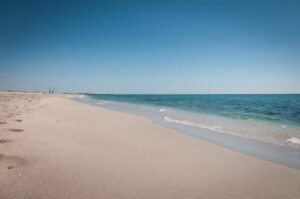 Then the shore becomes more rocky, then, to the west – only 20 km – Tarkhankut, and this is not a different fairy tale, but a legend, as if from another space or time. Crimea is different. Tiny as a continent. Not everyone will find Belyaus in it. The Greeks found it two thousand years ago. And half a millennium did not go from there. Apparently, there is something that does not let go, a force of Crimean attraction, one of many, not like everyone else.