It is probably difficult to find a person who would not understand that painting exists not only for the simple and direct reflection of colors, shapes, but also the plots of the wider world. Without the refraction of his beauty or miracle, there is no artist in the inner worlds of painting. With a brush or needle, on canvas and paper, directly or with an imprint of a wooden, metal or stone board, the master creates images deeper than the physical plane of the work. That is why people look into these depths, and look into the space of the artist’s world, and see there, in addition to what is outside and inside, also their own, not revealed or revealed differently. 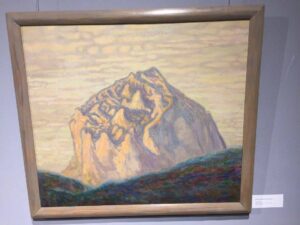 On October 13, an art exhibition opened in the AUTONOMOUS cultural space of the Crimean House State Enterprise in Kyiv at 9 Omelyanovich-Pavlenko Street. Four famous Ukrainian artists, united by a common goal, gathered their works on the walls… Chatyr-Dag and Ai-Petri… These are the names of those parts of the space of the “Crimean House”, where the paintings and prints of the exhibition are placed. And there is Alchak and Kush-Kaya, there is Sokil – and this fossilized coral reef of the ancient Ocean, the largest in the Crimea – it was also reflected in one of the paintings… Yes, this exhibition is dedicated to the Crimea. But it was not only the goal of the participants of this art project: Kateryna Korniychuk, Olena Mykhailova-Rodina, Oleksiy Vakarchuk and Ivan Mykhailov to admire the sight of lovers of brush and cutter works by reflecting the beauties of the sunny peninsula. Actually,it is an attempt to answer such an intimate and already painful question: “What is Crimea for me?”.

During the opening of the exhibition, one of its participants – Kateryna Korniychuk – emphasized: “The purpose of the exhibition is only one – the deoccupation of Crimea!“. And, in addition to the love for the Crimean land, the participants are united by a feeling that is already well known to thousands and thousands of Ukrainians who were forced to leave their Crimean homes. In the language of the Crimean Tatars there is a piercing word for that feeling – “asret”, which with some degree of conventionality can be translated as “longing for their world” or almost “nostalgia”… Because, as the participant of the exhibition Alexander Nezvanna testified: In the Russian Federation, none of the artists got to the peninsula. Then they, each of them, decided to write a short essay “What is Crimea for me?”, Because all of them are connected with Crimea by unforgettable creative impressions and memories… “.

The participants of the opening of the exhibition received not only artistic reflections of the answer to this painful question. The artist Olena Mykhailova-Rodina said it in an interview with the Voice of Crimea: “Crimea is love for me. The Crimean land itself is a land of love. It is difficult to find such a good place as Crimea. It is difficult to realize such a tragedy that happened… ».
The exhibits of the exhibition are not monotonous, and this heterogeneity reflects not only and not so much different styles or techniques in which the works were made, but also the very different refraction of the chandeliers of the inner worlds of artists of the Crimea. There is the already mentioned realistic Falcon, pink and transparent in a transparent perspective of the atmosphere. And there are landscapes written in such wide almost geometric planes of colors that someone saw in them a complete and sincere abstraction, and the watchful eye recognizes the Crimean landscapes in them. Clarity of color engraving prints – and next to the restrained gray tones of the canvas, they convey to you first the mood, then the image… 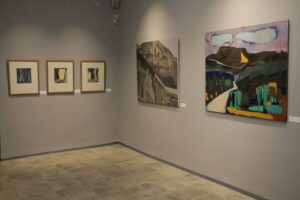 In the words of Ivan Mikhailov from the same source, we can draw a line under this story about an event in which sadness and memory, hope and faith were mixed: “Works related to the Crimea were written 3-5 years ago. Their writing was inspired by trips to the peninsula. We decided to make an exhibition-support about our memories… ». And more. As Dzhemil Karikov, recently deputy director of the Crimean House State Enterprise, said at the opening of the exhibition, he was “very pleased with the exhibition, which not only brings back pleasant memories of the peninsula, but also reminds of the Crimean problem.” Participants of the events also had a happy opportunity to hear the play of the famous Crimean music. 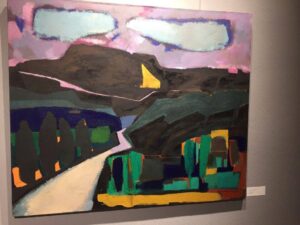 Those who had their own, other plans that day – can still immerse themselves in the atmosphere of artistic reflection of such a recent Crimea for almost a week. The exhibition will last until October 27. You can visit it at: Kyiv, st. Omelyanovich-Pavlenko (Suvorov), 9, SE “Crimean House”.

And finally. It is said of poets that they are part-time prophets. Or by definition. Many of the works in this exhibition did not give the impression that this sentence also applies to the artists of the cutter and the brush. The mood of the future return to his forcibly abandoned home is characteristic not of the whole exhibition, but of many of the works presented in it. One of the works, a triptych, is called: “Return”. It was written in 2010, and, perhaps, we are just or almost exactly such a corner of the Crimea that we will see it on it someday.