The National Museum of Ukrainian Folk Decorative Art presented the book “The World in the Palms. Memories of the Hero of Ukraine, embroiderer Vira Roik “. She tells about a great Ukrainian woman, a talented craftswoman and an incredible person who popularized Ukrainian embroidery in the Crimea for more than half a century. Today, this publication is more important than ever, because it contains convincing evidence that Crimea is connected with Ukraine by a spiritual “umbilical cord” that no one will ever break.

The book was published thanks to the efforts of Vadim Roik, the son of a famous artist. In it, like pearls, collected poetic lines, photographs and memories of all those who admired the skill of the Ukrainian embroiderer, studied with her, felt the magnetism of her personality.

One of the admirers of Vira Roik’s work, academician Dmytro Stepovyk, called it Crimean Poltava. After all, she was born in 1911 in the city of Lubny in Poltava region, and since 1952 she has lived in the Crimea, where she took with her her main treasure – her boundless love for the art of Ukrainian embroidery. 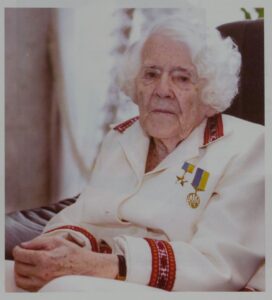 Since childhood, Vera dreamed of ballet, attended a choreography studio, was fond of music and drawing. But the disease canceled her plans forever. “Poor girl, she will never get out of bed,” she overheard the doctors’ verdict.

But Vera Roik was not like that to accept this challenge of fate and fold her arms, because she belonged to a glorious Cossack family. She not only got out of bed, but also became interested in embroidery and began to create beauty and decorate life with her own hands – at the age of 99.

Grandmother Oksana taught Vera to embroider and gave her a small golden thimble. Obviously, the thimble was charming, because since then embroidery has become the meaning of her life.

After high school, the girl worked in the Lubny artel of embroiderers. Thanks to her skill, already in 1936 she received the award of the All-Union Exhibition of Folk Art in Moscow. Since then, the works of the Ukrainian master have been exhibited in many museums in Ukraine and abroad, impressing with the variety of patterns and virtuosity of execution, which are now noted by experts.

And even the severe contusion that Vera Roik suffered during World War II and the damaged right arm did not prevent her from continuing her favorite business. Over the years, she learned to embroider skillfully with her left hand and continued to create beauty around her, starting from her own home. In it, even the newspaper and the chair on which the master usually sat, were decorated with embroidery with extraordinary taste. She believed that everything around should be elegant. That’s why Mrs. Vira ordered her clothes from Lviv craftswomen, and preferred embroidered clothes.

“Vira Serhiivna refused to try on the hotel and said that she had to see a workshop where her clothes would be sewn,” said Myroslava Tarakhan, a student who now works as a scientist at the National Museum of Literature of Ukraine. She is proud to have known the outstanding master as well as her mother, the well-known museum worker Zinaida Tarakhan-Bereza, who had a separate notebook with the inscription “Tips of Faith Sergeyevna”.

She advised, helped, taught and sympathized, caring about the small and universal problems of individuals and entire institutions, including museums, which she loved very much.

“I was impressed by this small, fragile gray-haired woman who had the charisma of a man of extraordinary kindness and sincerity,” says Adriana Vyalets, former director of the National Museum of Ukrainian Folk Decorative Art, which has repeatedly hosted exhibitions by Vira Serhiivna.

“In addition to all her talents and virtues, she had a special gift of all-encompassing maternal love, which she gave to many people. Dmytro Vlasovych Stepovyk called Vera Roik “All-Ukrainian Mother”. And, indeed, there was so much warmth, tolerance, love in her, which is so rich in a Ukrainian woman-mother, “she said.

“Vira Serhiivna gave this love to her numerous students by founding a school of Ukrainian embroidery in Simferopol. Both adults and children came there to learn to embroider with traditional Ukrainian techniques, got acquainted with the ornaments of different regions of Ukraine – Kyiv, Poltava, Podillya, Prykarpattia. Its greatest merit is that it was in the Crimea that it spread traditional Ukrainian culture, where it was scarce, ”said Lyudmyla Bilous, deputy director of the National Museum of Ukrainian Folk Decorative Art. 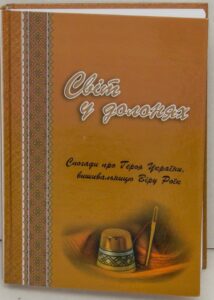 A special place in the life of this unusual woman was occupied by her son – Vadim Roik. He took care of his mother and helped her during her life, and now he takes care of her creative heritage, preserving a bright memory of her. Thanks to his efforts, in addition to the Simferopol Museum of Ukrainian Embroidery named after Vera Roik, which began its work in 2012, is preparing to open a museum of the same name in Gurzuf. In them you can see not only the works of the famous embroiderer, her personal belongings, samples of embroidery, which she collected all her life, but also a unique collection of 400 thimbles made of different materials.

Vera Serhiivna embroidered until the last days of her life and was upset that the doctors did not allow her to do her favorite thing all day. She had big creative plans and was preparing for the opening of the exhibition in Kyiv.

The earthly life of the outstanding Ukrainian woman is over, but her numerous works, which she left, still retain their magnetism and have an impact on people who communicate with her works.