The Valley of Ghosts, located on the southwestern slope of the Demerdzhi mountain range near Alushta, at least before the Russian occupation, has always been considered an almost mandatory point of excursions and hiking on the peninsula. And the easiest way to get to this area was from the village of Luchisty, which lies at the foot of South Demerdzhi. In addition to the valley itself, the remains of the ancient fortress of Funa remained on the slopes of the mountain. 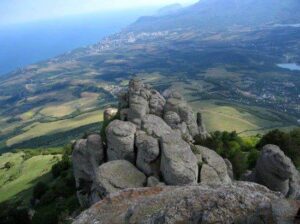 By the way, in translation from the Crimean Tatar “demerdzhi” means a blacksmith, and the legends of the Kirill indicate that this is the name of the hill. However, before talking about legends and stories, it is necessary to say a few words about Demerdzhi herself. The mountain, or rather, its slopes – is a unique accumulation of rocks that form the so-called Brylov chaos. The shape and size of these blocks are so bizarre that you can guess the recognizable figures and silhouettes created by the most ingenious sculptor – nature. Giving long shadows, these figures constantly change their outlines, and in them you can see more and more new images if desired. That is why this valley has been called the Valley of Ghosts since ancient times. But unlike other massifs of the Main Crimean ridge, composed mainly of limestone, the Demerdzhi ridges, formed by conglomerates of the Jurassic geological period, millions of years, weathered,formed bizarre columns, pillars and original stone statues. 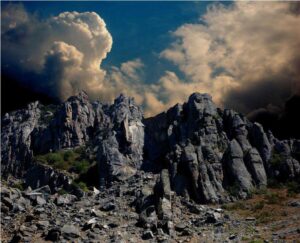 As for the legends, the most famous of them tells of a blacksmith who once lived on this mountain. He forged weapons here and was so aggressive and unkind that in his spare time he terrorized, like the Russian occupiers today, a village located in the valley. One day a blacksmith captured a local girl named Marina. The girl tried to escape, but stumbled on a rock, fell and died. The god of the mountain was angry, and huge boulders fell from the top, destroying the smithy, the blacksmith, and the entire settlement, because the fellow villagers of the abducted girl did not defend her. 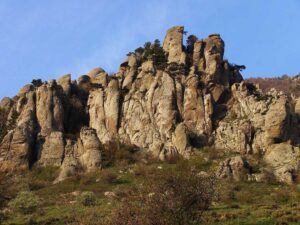 But the mountain remembers not only the folk blacksmith and his prisoner. Here in due time there were events, closer to us and not less interesting. Many warm memories, for example, caused many tourists to visit the trail, where they shot scenes from the cult comedy film by Leonid Gaidai “Caucasian captive”. After all, the “shock” episodes of this cult film were staged in the Crimea, in the Valley of Ghosts. Here, for example, “Nikulin’s Walnut” caught my eye – probably the only one of the many trees in the Crimea that has its own name, as it filmed the famous scene of the fall of “Balbes” from a tree. By the way, the branch was then cut down accordingly, the place of the fall was prepared in advance… But the branch broke in a completely different place, and when it fell, Yuriy Volodymyrovych broke his arm. And in the work on the film had to take a long break.

And what was the value of the opportunity to be photographed on a stone (of course, for a fee), on which Natalia Varley allegedly danced under “Somewhere in the white light ?!” ?! Interestingly, this stone is not so small. The block has the shape of a regular parallelepiped, and its height is considerable. Then a metal ladder was carefully attached to the stone. However, as it turns out, local guides are now openly fooling gullible visitors. In fact, this stone has nothing to do with the “Caucasian captive”. The film shows that Natalia Varley makes a light jump on a stone, the height of which is not more than 50 cm from the ground, and she dances at the level of Shurik’s belt. So the mentioned block guides-workers brazenly pretend to be “the same” stone, even though it is two meters high!

In fact, the real stone of Varley is located about 100 meters northeast of the “Nikulin nut” among the huge fragments of the conglomerate and is a flat block of half a meter high.

However, the ultimate goal of visiting the legendary valley is still the top of Mount Demerdzhi. Being on it, you can see that the outlines of the Valley of Ghosts are constantly changing depending on the position of the sun. In addition, it offers incredible views of Alushta, the neighboring Chatyr-Dag massif, and in good weather – even on Cape Megan, which is deep in the Black Sea.