The Karaites are one of the few indigenous peoples whose homeland is Ukraine. Today there are only a few hundred of them in Ukraine. There are several centers of compact residence of the Karaites: Evpatoria, Feodosia, Sevastopol, Simferopol, Bakhchisarai, Halych, Lutsk, Kyiv, Kharkiv, Lviv. Most Karaites live in the Crimea. As for the Crimean Tatars and Crimean Tatars, Crimea became the ancestral home for the Karaites.

Regarding the theory of origin 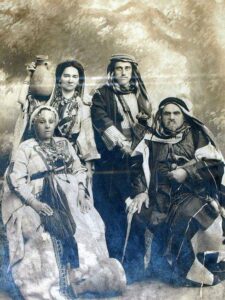 The name “Karaite” appeared through religion. Thus, the word “punishment” is translated from the Hebrew language as “read”, and “punish” as “reader”. In addition, in Judaism, “punishment” is a connoisseur of sacred texts. Ananism, which is the basis of the Karaite religion, is one of the currents in Judaism. The name of the movement comes from the name of the preacher Annan bin David, who criticized the Talmud in Baghdad, instead offering a direct reading and understanding of the Scriptures without intermediary books, without the interpretation of priests, that is, direct communication with God. Here is Anan’s key approach: “Look carefully in the Bible and do not rely on my judgments.” However, the Karaite religious system is based solely on the TaNaH (Old Testament).

Folklore and ethnographic studies have revealed the characteristic features of the cultural components of the Karaites. Ancestor cults are most pronounced here (the most striking example is the holding of prayer rites at the Balta Tiimez cemetery near Juft-Kale near Bakhchisarai), the world tree (veneration of oaks, prayers in oak groves, installation of black marble carved trees on graves). life), celestial bodies (images of the moon, sun, vision on items of clothing, baking dough products with the image of celestial bodies), etc.

Karaite folklore has many parallels with the culture of the Khazars. In most Turkic folklore systems, the god Tengri (Tangri) denotes a supernatural cosmic force. In the Karaites, Ten’ri is not the name of a single god, but the name of God himself. The name is used both for pagan gods and for the God of Israel, the Bible – Ten’ri Israelnin.

The personification of Tengri Khan on earth is the oak, which for the Karaites, as for many peoples, is a sacred, ie sacred tree. The sacredness of the oak for the Karaites can be illustrated by the Balta Tiimez cemetery (the name of the cemetery translates as “the ax will not touch”) in Juft-Kale. The Karaites are extremely respectful of the oaks that grow here. These oaks are personified, they are addressed with prayers and requests.

The religious principles of the Karaites, laid down, in particular, by the teachings of Annan, formed the basis for the peculiarities of ethnic character. Thus, most Crimean researchers note that the Karaites are characterized by charity (it was almost impossible to meet a Karaite beggar), peace and tolerance. It was difficult to find a informer among the Karaites. Some Evpatoria sanatoriums, hospitals, squares were built at the expense of wealthy Karaite families. The Karaites even financed the construction of an Orthodox church. Compared to other peoples, Karaites married quite late: men in their 30s and girls in their 20s. The marriage took place in the morning, without loud mass ceremonies, in the presence of close relatives and community elders.

The calendar of the Crimean Karaites begins the chronology from the creation of the world (3751 is added to the Christian chronology). The day begins in the evening. According to the lunar calendar used by the Karaites, the length of the year is 354 days, 8 hours and 48 minutes. New Year comes in late September. The main day of the week is Saturday. All holidays begin after sunset last day with a festive service in the kenasa (kenasa – Karaite temple, which is always located strictly on the principle of north – south, near which there are always fountains and rooms for ritual washing; at the entrance to the kenasa must be undressed) and end on sunset on the day specified in the calendar. On holidays they rest and do not work. 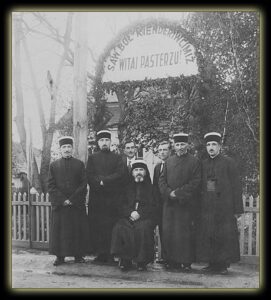 In Khan’s time, the Karaites did not feel significant oppression, they were even respected people at the court, took care of the Mint. Even in the Crimean Khanate (since 1734) the Karaites had their printing house in Juft-Kale. Coexistence with the Crimean Tatars has led to changes in the language and rituals of the Karaites.

The Karaites declared themselves quite loudly during the Russian Empire. However, the Karaites were officially formalized as a separate ethnic group by Nicholas I in 1837, when the spiritual administrations in Evpatoria (this city became the second center of the Karaites after Jufut-Kale), Galicia, Trakai (Lithuania) were determined. It is also officially recognized that the leading position of the Karaites – Gaham. Gaham served as both spiritual mentor and administrative leader. In the Russian Empire, the Karaites had a relaxation, they were allowed, unlike the Jews, to acquire land ownership, which allowed them to become wealthy landowners and industrialists. Economic oppression of the Karaites in the Crimea in the late nineteenth – early twentieth century. became the basis for the appearance of a circular of Interior Minister Stolypin, which confirmed that the Karaites are non-Jews.

Anti-Semitism at the turn of the XIX – early XX centuries. prompted Karaite leaders to formally seek expert advice on their ethnicity as Jewish scholars. In September 1938, the mayor of Evpatoria, Semyon Duvan (of Karaite origin), went to Berlin, where he demanded that the Minister of the Interior conduct an examination and recognize the ethnic identity of the Karaites. On January 5, 1939, a document with conclusions was sent to Semyon Duvan. Expert assessments had satisfactory conclusions for the Karaites. 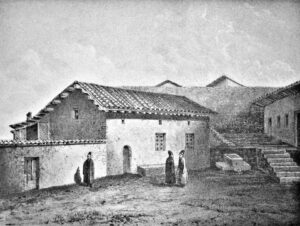 As with the origin of the Karaites, there are several versions of the appearance of the Karaites in Halych, Lutsk, Lviv and other cities of Ukraine. Here are the two most common: 1. The Karaites settled in Halych during the reign of Danylo Halytsky, when he concluded a treaty with Khan Batu in 1246. Then 80 families moved to the banks of the Dniester. 2. Grand Duke Vytautas of Lithuania moved 383 Karaite families from the Crimea to Trakai, later to Lutsk and Galicia after the Crimean campaign in 1392-1397. From there, the Karaites settled in other cities of Lithuania, Volhynia and Podillya.

No documentary evidence in favor of the first version has survived, the Galician-Volyn chronicle also has no mention of the Karaites, the only thing that keeps this theory in the field of view of researchers – the mention of an entry in an old religious book that burned during the fire of 1830. A copy of the record of this book in 1813 was made for the Galician-Lviv Metropolitan Angelovich by Gazan Abraham Leonovich. The record reported that under the terms of an agreement between Khan Batu and the Galician prince Danylo, the khan allowed hundreds of Karaite families living in the Crimea to move to Halych to trade between the East and the Danylo principality.

Obviously, the second version of the emergence of the Karaites in Western Ukraine is historically more motivated and documented. Karaite communities appeared in Halych, Lviv, Lutsk and other cities of this region precisely because of Vytautas’ military and political activities.
The first documentary mention of the Karaites of Halych dates back to 1578. Then King Stephen Batory granted them the right to live, duty-free trade in goods and alcohol, and guaranteed them the preservation of rights and customs. For this, each Kapaim court had to pay 1 florin and 30 tax money.

The Karaites settled in Halych near the Market Square. The Karaites were quite influential in the urban environment of Galicians. The history of the Galician Karaites began to be recorded in detail from the beginning of the 18th century. No more than 2-3 hundred Karaites mostly lived in Halych. The Karaites of Galicia also achieved equality with Christians after the partition of Poland and the transition of Galicia under Austrian rule. The attitude towards the Karaites in the Grand Duchy of Lithuania can illustrate such a telling fact. Under Sigismund I, a dispute arose between the Karaites and the Jews: the Jewish elder demanded that the Karaites obey him, which the latter categorically did not accept and opposed. After listening to both sides and exploring the issue, Chancellor Gastold sided with the Karaites.

In Lutsk, the Karaites lived in the then city center near the Jewish, Armenian and Latin quarters. The street where they lived has been called Karaim since then. Lutsk still retains an architectural monument – the Karaite kenasa. Until 1936, the Karaite magazine Karai Avazi was published twice a year in Lutsk.

In Europe, the Karaites became interested mainly in the XVI century. The Talmudic Jews viewed the Karaites as heretics, rebuked them for their atheism, inability to write on religious topics, and so on. But this is not quite true. Karaites are the authors of a number of artistic, journalistic and scientific works. Even Voltaire praised Karaim Isaac’s polemical work, Hizzuk Emun. Galician Karaites also gave a number of public and cultural figures, including the poet Zakhapiy Abrahamovich (1878-1903). 12 of his poems were published, including the song “Hey, eagle, eagle.”

In Ukraine, there is an institution that deals with the preservation of monuments of Karaite culture – a museum of Galician Karaites. There is also a private Karaite museum in Feodosia, as well as a museum branch in Bakhchisarai. In our state there is only one kenasa – in Evpatoria.

In 1940, the Karaite Ethnographic Museum was opened in Vilnius, the funds of which were later transferred to the Historical and Ethnographic Museum of the Lithuanian Academy of Sciences… Exhibitions dedicated to the Lithuanian Karaites were collected in Lithuania. The exhibits are not very large, but they include unique things: Karaite weapons, things that emphasize the military power of the Karaites. The largest number of Karaite temples is also in Lithuania.

At the initiative of the Karaites, inter-republican congresses were repeatedly organized, the purpose of which was to acquaint the Karaite youth for the further creation of families. Such events were held in Moscow, Trakai (Lithuania), Simferopol…

Mysteries of the Crimean Jerusalem

What are the ruins at the Karaite sloboda silent about?