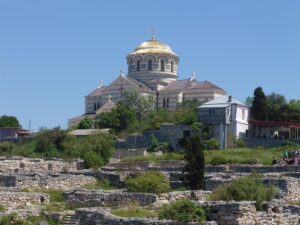 Сhersonesos Tavriya was inscribed on the UNESCO World Heritage List on June 23, 2013 at the 37th session of the UNESCO World Heritage Committee in Cambodia. The list also included a choir – an agricultural district around Chersonesos. The decision to include was unanimous. The only remark concerned the huge Orthodox church-new building in the heart of the Chersonese settlement, which, according to some archaeologists, is detrimental to the ancient monument.

Chersonesos became the seventh site in Ukraine recognized by the UN in terms of education, science and culture as a world heritage site that contains outstanding cultural and natural values. The study of the ruins of the former Chersonesos began in 1827, and systematic excavations in 1876. The excavations revealed the remains of Greek, Roman and Byzantine defensive walls, residential quarters, houses with rainwater pools, baths with various equipment, household and remnants; more than 50 Christian churches, baths, theater (for 3000 people), etc. Many burials with rich inventory have been excavated behind the city walls.

The museum’s collection was formed over a hundred years ago. At the time of the Russian occupation of Sevastopol in 2014, the reserve had more than 200,000 household, cultural and religious items found during excavations on the outskirts of the city. It is one of the richest archeological collections in Europe. 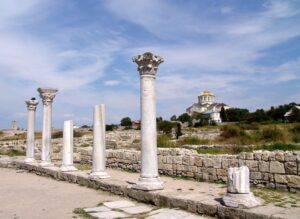 On October 3, 2015, the Government of the Russian Federation by its order entered the Chersonesos Tavriya National Reserve into federal ownership into “objects of cultural heritage of federal significance included in the Unified State Register of Cultural Heritage Objects (Historical and Cultural Monuments) of the Peoples of Russia Federation “, and renamed to the” Federal State Budgetary Institution of Culture “State Historical and Archaeological Museum-Reserve” Chersonesos Tavriya “. The order states that the Ministry of Culture of Russia will perform the functions and powers of the founder of the institution and together with Rosmine and the “government of Sevastopol” must ensure in the prescribed manner “ownership” of property assigned to the institution declared by Russia in 2014-2015. as being “owned by the city of Sevastopol”.

Russia tried to integrate “Chersonesos Tavria” in its new status in the world cultural space. UNESCO did not recognize the Russian jurisdiction of the object and officially stopped cooperating with the museum-reserve for the period of temporary occupation of Crimea. Realizing the futility of these efforts, the Russian authorities decided at their own discretion to conduct archaeological, restoration and research activities in Chersonesos, including valuable finds in Russian museum collections, and to use the historical monument for its own information and entertainment purposes. 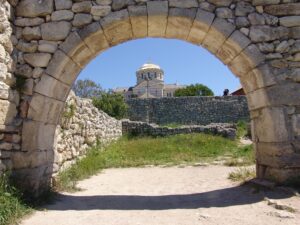 In this regard, the Ministry of Foreign Affairs of Ukraine, Ukrainian media and public activists have expressed their concern, because in fact “Chersonese Tavriya” is being transformed from a scientific to a religious object. The relevant analytical review of the Crimean human rights group “The state of the Chersonesos Tavriya National Reserve in accordance with UNESCO norms and standards” was presented on December 25, 2015 in Kyiv. Remote monitoring leads experts to try to turn this heritage into a predominantly religious site.

* * *
Experts note an unstable situation: a change of leadership, the transfer of the reserve to the jurisdiction of various organizations, the inability to control the reserve by international authorities. Human rights activists also note such a negative trend as the change of purpose of the historical and archeological complex by the Russian authorities. Thus, in pursuance of the instructions of Russian President Vladimir Putin on the transformation of Chersonese into the so-called The “Mecca of Russian Orthodoxy”, where the strengthening of the centralized Russian state allegedly began, the construction of a cultural and educational “museum of Christianity” for Vladimir Putin’s clergyman, Bishop Tikhon. 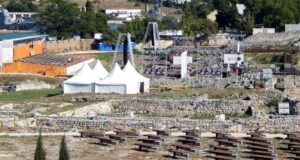 In particular, small architectural forms with touch kiosks have already been installed, an observation deck with a panoramic installation and a concrete pedestal for a model of the Chersonese territory have been made, and a new passageway is being built near the Zeno Tower. At the same time, building materials are stored directly on the territory of the ancient settlement, construction debris is scattered throughout the reserve, and construction equipment destroyed the route of the medieval temple, violated the cultural layer and elements of museification of ancient buildings.

It is allegedly financed by the development of the museum-reserve, improvement of its technical equipment and landscaping for cultural events, and in fact the loss of the unique historical authenticity of the World Heritage Site by the Russian My History Foundation, which has entered into an agreement with the Chersonesos Tavriya Museum in agreement with the Ministry of Culture of the Russian Federation.

The last glaring facts of the destructive actions of the Russian occupiers was the holding in 2018-2019 of the so-called International Music Festival “Opera in Chersonesos”, for which 15 metal trucks and a diesel-generator power substation were brought to the reserve, four stages, three screens, a spectator stand weighing 500 tons, light and sound equipment with a capacity of 50 kilowatts were installed. All this was mounted directly on the ancient ruins and created an extremely negative anthropogenic load on the UNESCO monument.

In preparation for the entertainment event, medieval arched stones and an ancient column were thrown away, communications were laid on the remains of archeological sites, construction was carried out where research and restoration work had not yet been completed, heavy machinery was moving along the cultural layer and unexcavated part of the settlement.

According to available data, the organization of the festival “Opera in Chersonesos” was carried out by the occupation authorities in accordance with the Act of state historical and cultural examination of 22.05.2018, conducted by three people: Belyaev Leonid Andreevich – a leading researcher at the Institute of Archeology of the Russian Academy of Sciences Mykhailivna – head of the scientific department of FSUE “Central Research and Restoration Workshops” and Svirina Olena Viktorivna – architect. 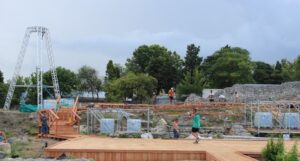 The Chersonesos Tavriya Reserve had a number of allotments during its rule in Ukraine, but it is difficult to determine whether they are in operation today. It is about 450 hectares of territory within Sevastopol. The plot is surrounded by country houses. Both civilians and the Russian military encroach on these squares. 160 hectares is the so-called 10th section in Yukharina Balka, which is part of the mentioned areas, it is a former tank track. During the times of Ukraine it was not used, the territory was transferred for archeological research. Several ancient estates have been excavated there. This is the best preserved, undeveloped part of the choir of the Poltava of Chersonesos Tavriya, thanks to which the site is nominated for the UNESCO World Heritage List. Landings have been preserved on this site specifically for tank exercises, and there is no guarantee that Russia will decide to leave this land to the reserve,rather than use it for military purposes or for commercial development.

Things are no better with the choir (estates) of Chersonesos, which stretches for many kilometers and is also under the protection of UNESCO. In April 2016, the Russian military rolled into concrete a section of an ancient estate on the Mayakov Peninsula. Now there is a concrete pit 250 by 250 meters and 2 meters deep. “An act was drawn up on the destruction of the ancient estate – a cultural heritage site of federal significance of the Chersonesos Tavriya Reserve,” said Denis Protsenko, then head of the Department of Cultural Heritage Protection. In the winter of 2018, an antique estate of the 3rd century fell under the bulldozer’s bucket. It was planned to build a depository of the archeological museum-reserve “Chersonesos Tavriya” on this place.

In addition, almost 70% of the perimeter of the ancient city falls on the coast, and is already preparing a project to strengthen the coast of Chersonese. The museum management decided to follow the recommendations of the UNESCO World Heritage Committee, which were provided in 2013: “Immediately take measures to preserve and stabilize the most vulnerable part of the visible archaeological remains to prevent their destruction and disappearance.” It is reported that 200 million rubles will be spent on the Chersonesos fortification project alone. And the works themselves, according to preliminary calculations of experts, can cost 4 billion rubles.

On April 13, 2018, the UNESCO Executive Board decided to send a monitoring mission to the occupied Crimea, which will fight against the destruction by Russia of the historical heritage of the Crimean Tatar people and the peninsula as a whole. In October 2018, at the 205th session of the UNESCO Executive Board in Paris, the report of the Director General was considered, which states the lack of access for Ukraine to its cultural heritage sites, historical and architectural monuments, museums, biosphere reserves, scientific centers, etc. The facts of illegal archeological excavations, export of cultural values ​​from the territory of Crimea are recorded.The document emphasizes the need to establish an effective monitoring mechanism for the situation in the occupied Crimea and informs about consultations between Ukraine and the UNESCO Secretariat on the format of direct monitoring in the area of ​​competence of the Organization.

Yevhen SAMUKHA, Head of the International Relations Service of the Representation of the President of Ukraine in the Autonomous Republic of Crimea