The struggle in the Crimea after the October coup

The news of the October coup reached the Crimean peninsula on November 8. All parties except the Bolshevik Party opposed the escalation of violence in the country. By a majority vote of the Soviets in Simferopol, Kerch, Feodosia, and Yevpatoria, which were based on the Socialist-Revolutionaries and the Mensheviks, they passed resolutions not recognizing the power of the Bolshevik Party.

After receiving a message from Petrograd, the Bolshevik organizations of the peninsula intensified their actions. The most radical was the council in Sevastopol. Already on November 8, she announced the takeover of power. The Bolsheviks in the city began sending agitators to ships, businesses, and military units. In mid-November, the local Bolsheviks received significant new reinforcements: a group of party workers arrived in the Crimea from Petrograd, who already had experience in the revolutionary struggle.

The policy of the Central Council towards Crimea was ambiguous. She hardly interfered in political events in Crimea, but persistently tried to involve Crimean politicians in closer cooperation with her. Special efforts were made to gain more influence over the Black Sea Fleet. On January 27, 1918, a law was issued on the transfer of the Black Sea Fleet under the jurisdiction of the Ukrainian People’s Republic.

Sailors of the Black Sea Fleet actively responded to the events in Petrograd. Due to the fact that the navy was strongly influenced by the anarchists, who were allies of the Bolsheviks, most of the sailors supported the October coup. November 19, 1917 in Sevastopol naval-wide I opened the Congress, whose members said they believe ” elected Central Executive Committee of All-Russian Congress of Soviets only supreme power and calling all sailors, soldiers, workers and peasants councils rally around and support them in the struggle against the counterrevolution». The congress also discussed the issue of “betrayal” of the Central Fleet, which took a hostile position to the Soviet government. The Pro-Bolshevik part of the sailors made a decision to dissolve it. An important event at the congress was the clash between the Bolsheviks and representatives of the Central Soviet. The latter raised the issue of Ukrainization of the Black Sea Fleet. The Bolsheviks did everything to reject this proposal.

However, it should be noted another decision made during this congress: to send an armed detachment to the Rostov and Melitopol-Kyiv areas “to help the revolution and to defeat the volunteer and Cossack units” that allegedly threatened to invade Crimea for counterrevolutionary purposes. Soon such a detachment was indeed sent across the Kerch Strait to the mouth of the Don on a specially assembled flotilla of small boats. However, officers and cadets, as well as the Cossacks, completely defeated these rather poorly disciplined forces. After being repulsed in Rostov, the rest of the detachment went by land to Mariupol and beyond, looting and killing the inhabitants of southern Ukraine. A. Malyshkin testified: “ Drunk and fierce sailor’s fame swayed in Ukraine… For the first time swallowing blood, sailors now did not know the edge of their own ruthlessness». Only the remnants of the Bolshevik detachment returned to the Crimea. However, it was she who later played a terrible role in inciting the horrors of the Red Terror on the peninsula.

No less consistent was the line pursued by the Bolsheviks in the national question: its complete disregard. Much later, J. Gaven openly wrote: “It should be directly noted that during the Soviet rule in the Crimea in 1917, we were unable to properly raise and resolve the national question. Our organizations were very weak before seizing power in the cities; revolutionary activity and their influence were limited almost exclusively to the narrow sphere of the urban proletariat and, mainly, of the navy. We almost did not know the mountain village, that is, the Tatar village. We did not have workers, more or less prominent Bolsheviks, who would have grown up in the Crimean conditions, except for Ostrovskaya, who grew up in the Crimea. The leaders of the revolutionary movement were comrades who came from other parts of Russia… The leaders of the Crimean Bolshevik organization paid serious attention to the national question only when the Tatar Kurultai had already directed armed squadrons against the Soviets. … When, having been defeated by the Germans, our units, retreating,passed through the Tatar villages, they were faced with clearly hostile sentiments of the Tatar masses».

After the establishment of the Crimean headquarters, the Central Rada recognized it as a military body of the peninsula. Through the headquarters of the Odessa district, she sent him orders for “demobilization and release on leave of all soldiers and sailors of the Greater Russian provinces.”

Elections to the Constituent Assembly took place in the Crimea on November 25-27, 1917. All political parties and national and religious organizations took an active part in the election campaign. But the majority of the population was quite indifferent to the election. In the Tavriya province, a total of 574,000 people voted, which was only 54% of voters. Deputies from the Tavriya province were: S. Nikonov, V. Bakuta, I. Popov, N. Alyasov, P. Tolstov, S. Zak, D. Golovko (all SRs), V. Saltan (Ukrainian SR), D. Seidamet , A. Ozenbashli, S. Khattatov, A.-S. Aivazov and U. Bodaninsky (Crimean Tatars), I. Bunakov and N. Ostrovskaya (Bolsheviks). 52.2% of those who took part in the vote voted for the SRs, the Cadets received 6.8% of the vote, the Bolsheviks 5.5%, the Mensheviks 3.3%, and the People’s Socialists 0.8%. Among the national lists, the votes were distributed as follows:Crimean Tatars received 11.9%, Ukrainians – 10.7%, Germans – 4.8%, Jews – 2.4%. First of all, the workers of large cities voted for the Bolsheviks: Sevastopol, Simferopol, Feodosia, Kerch, and Berdyansk. In general, during the elections throughout Ukraine, only 10% of the population voted for the Bolsheviks, and in the Tavriya province (without the navy) – 5%.

On December 3, an extraordinary meeting was opened in Simferopol, convened with the assistance of the provincial zemstvo assembly of the Tavriya province, with delegates from the councils of workers’, peasants’ and soldiers’ deputies, zemstvo and city self-government bodies. It consisted of representatives of various parties: from the Cadets to the Mensheviks and Socialist-Revolutionaries (about 400 people). The meeting decided to create a Council of People’s Representatives headed by Menshevik P. Novitsky from representatives of city dumas, zemstvos, public and other political organizations. It was to convene the Crimean Constituent Assembly as soon as possible…. 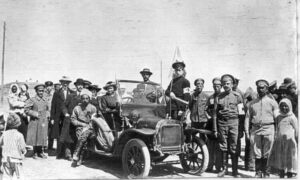 The Council of People’s Deputies was the first attempt in the history of Crimea to create a representative multinational body of government that would enjoy the trust of the population. She did not accept the Third Universal of the Central Council, according to which the three northern districts of the Tavriya province separated from the territory of the province, and therefore proposed “to take measures to identify the will of the population of the northern districts of the Tavriya province on the national question.”

Like the House of Representatives, Millie Firka did not recognize the October coup. Its members considered it necessary to create a democratic republic in Crimea free from Bolshevik influence. On November 16, in the appeal “On Power in Crimea,” Milli Firka put forward the slogan “Crimea is for Crimeans,” that is, for the inhabitants of the Crimean peninsula: “The Crimean Muslim Executive Committee of any nationality over another, as well as not assuming the idea of ​​the spread of power of any state over the Crimea, recognizes and believes that extraordinary circumstances order the peoples of Crimea to take care of the fate of their land and unite for common friendly work for the benefit of all peoples inhabiting the Crimea. “

The same words were contained in a statement by the Musvykonkom, published in the newspaper “Millet” on November 29 (15), in which the local population assured that the slogan “Crimea – for Crimeans” guarantees respect for the rights of every inhabitant of the peninsula, regardless of national, racial and religious affiliation, stressed the readiness, if necessary, to fight for these political ideals and called for cooperation: “In the Crimean peninsula, no nation should rule over other nations, each nation must decide its own The Crimean Muslim Executive Committee, in asserting its authority, does not demand that anyone renounce their nationality; he extends his hand to everyone, as a friend, fellow citizen and brother, and urges us to take a measured step together. ”

That is, Millie Firka wanted to create a republic on the peninsula completely independent of any government. Immediately after the Bolshevik coup, one of its leaders, A.-S. Aivazov, noted on the pages of the party newspaper “Millet”: ” Now there is no state, no laws, no order… Peace and tranquility in the state. Order is uprooted, everyone behaves as best he can… We will not allow Bolshevik and anarchist detachments to appear in our Crimea . ”