Following the party’s instructions, the Bolsheviks nationalized banks, credit institutions, rail and water transport, the navy, estates, monastic farms, large enterprises of the most important industries, and resort organizations in the Crimea. In the villages the farms of wealthy peasants were nationalized. 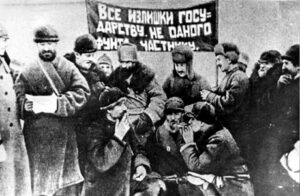 To provide finance, the Bolsheviks again used the already known method of robbery. They began to plunder the local population immediately after the capture of Crimea. On April 13, the Simferopol Revolutionary Committee adopted a decision: “ To recognize the need to impose all ownership groups, to instruct the Commissariat of Finance to submit a corresponding project to the Revolutionary Committee within two days. To instruct the Commissariat of Finance to extend its actions to all areas of Crimea liberated from the power of the regional government . ”

The “enemy classes” were given a large contribution. The total amount of taxation was initially set at 10 million rubles, but then it was significantly increased. The period for which this contribution had to be collected was set at two weeks. In addition, the bourgeoisie had to pay an extraordinary tax. The so-called material duty was introduced. The wealthy joined the rear militia and often, regardless of age and health, went to work “to help the front.” The property of emigrants was subject to confiscation.

It should be noted that the Bolsheviks were able to draw conclusions from their own mistakes. A year ago, during the existence of the Republic of Taurida, all requisitions took place at the request of military units of the Red Guard. Ultimately, this led to the complete disintegration of these units and their transformation into a serious threat to the Bolshevik regime. And now the Crimean Bolsheviks have placed the process of collecting contributions under strict supervision and control. In the first days of its operation, the Crimean Regional Committee issued a resolution stating: “The imposition of any contributions by local authorities without the prior permission of the Finance Department is prohibited.” At the same time, the regional committee fought against any manifestations of “spontaneous” (ie without an order of the regional committee) requisitions. On June 8, Bakhchisarai reported from Seit Amed Abdulayev that “dark faces in sailor uniforms appeared in the cityengaged in looting under the guise of collecting food for the defenders of Petrograd. The Crimean regional committee immediately intervened and ordered the arrest of these “speculators.” 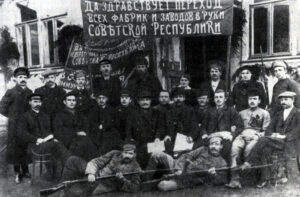 The obligation to pay the contribution rested not only on the so-called “bourgeoisie” or “kulaks.” In order, according to M. Bunegin, “to dismantle the village and disarm the kulaks, all the peasants of the Crimea were ordered to pay a total tax of 5 million rubles.” A few days later, according to the decision of the Simferopol council, it was raised to 12 million rubles, because “after a frantic profit and robbery for a year of reaction, a smaller amount will not meet the required tax.” To carry out this order, Bolshevik detachments went to the Crimean villages. Since most of the Crimean Tatars lived in the villages, they were the burden of the looting planned by the Bolsheviks. Those miserable pieces of property and food, which did not have time to take out the German, Entente and White Guard troops, were now taken out by the Bolsheviks.

The Mensheviks tried to stop the Bolsheviks from destroying the inhabitants of Crimea, to prove the recklessness and ineffectiveness of such actions. “The only way out of the financial crisis,” they urged, “is to raise both production and productivity.” However, everything was in vain. The Bolsheviks did not want to listen to advice dictated by common sense.

In addition to contributions, the detachments confiscated “remnants” of bread and other food from the peasants. In order to have full control over the quantity of foodstuffs, the free trade in bread was forbidden. Requisitions have become widespread. The detachments were to carry out a general requisition of bread. 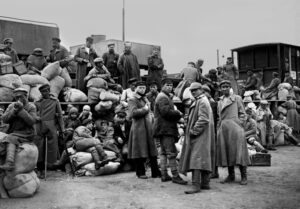 The total export of food led to the introduction of a card system on the peninsula in May. Krymprodkom established consumption rates are for residents of the Crimea: bread (wheat flour) – 0.5 pounds per day, cereals – 4 pounds per month and potatoes – 3 3 / 4  pounds per month, canned – 3 cans per month, fruit – 0 £ 5 a month, sugar – £ 1 a month, tobacco – 30 cigarettes a day, matches – 1 box for two days, laundry soap – £ 1.5 a month, toilet soap – £ 0.5 a month. This set of products was the so-called subsistence level for one person.

The rate of food exports outside the Crimea has been growing. Military commissioner of the Moscow district artupravy B. Muravin that in June came to the peninsula with check, sent June 19 to the Council of Defense named Stasova letter in which he claimed, ” comprehensively examining it (the Crimea – Ed.) Natural and economic wealth , I consider it necessary to undertake immediately their planned export to the center of Russia ».

The Crimean authorities tried to solve financial and food problems in several ways. In addition to the usual requisitions, the common means of obtaining money and food were the constant trips of the Crimean Bolsheviks to Kyiv with requests for assistance. On April 17, O. Gallop was sent to the Soviet People’s Commissar of the USSR “for a petition on extremely urgent financial issues.” In May, B. Gelman went to Kyiv to resolve “extremely urgent financial and food issues.”

Kyiv did not hesitate to provide assistance. In May, 199,000 poods of grain were sent from Ukraine to the Crimea, and in early June – 420 thousand poods of flour and 709 wagons of sugar. 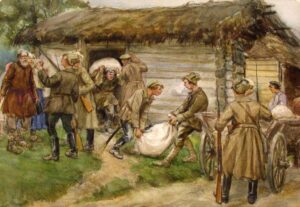 Withdrawal of food from the population and forced sowing campaign led to growing public outrage. Spontaneous protests by the local population began to emerge. To consolidate their power, the Bolsheviks perfected the Crimean Emergency Commission on Counterrevolution and Sabotage, established on April 14. The Crimean National Committee began to “ensure the implementation of the orders of the regional revolutionary committee.” In fact, it meant the total annihilation of those who dared to express discontent. The establishment of “revolutionary legitimacy” led to another wave of red terror on the peninsula.

However, such mass terror as in 1918 was not observed in Crimea. In 1919, the Socialist-Revolutionaries, Mensheviks, anarchists, and national organizations escaped brutal repression and even participated in the Revolutionary Committees, trade unions, and others. But the Bolsheviks imposed severe restrictions on the press and propaganda. Newspapers branded as “bourgeois” (for example, the Crimean Herald) were immediately closed.

In general, the attitude of the government of the Crimean SSR to political opponents was more restrained than in 1918. The Crimean National Committee issued a strict order banning arbitrary searches, arrests, genocides, requisitions, and others. However, the population of the peninsula did not care whether the authorities authorized the requisition, during which they were deprived of all means of subsistence, or not.

Myrmekion. Consequences of the occupation for cultural heritage