Tarkhankut: memories of the future 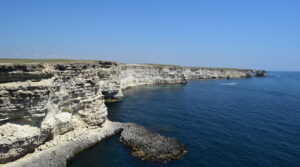 Nowadays, when most Ukrainian citizens will hope only in the coming years not to see Crimea as their ears, everyone who has ever visited the peninsula will feel sorry for their once-favorite piece of Crimea. For example, visiting tourists strongly disagreed with the translation of the name of the secluded Crimean Cape Tarkhankut from Crimean Tatar as the Devil’s Corner. After all, for many it was the most popular Crimean resort. This is one of the most beautiful places on the peninsula with its pristine wild and picturesque nature. Therefore, Tarkhankut, like a magnet, annually attracted a large number of vacationers. 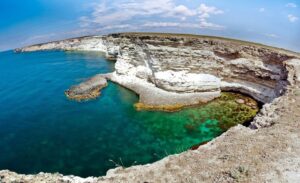 If you look at the map, you can see that the cape is washed by the Black Sea from the north, west, northwest and Lake Donuzlav – from the south. The area of ​​the Tarkhankut Peninsula is 1.5 thousand square meters. kilometers. But the main resorts are Olenivka, Chornomorske, Mizhvodne, Maryino and Okunivka. In addition, it is one of the very few ecologically clean corners of the Black Sea coast. And the water in the sea is so clear that it is easy to hold international diving competitions or underwater photography. In general, Cape Tarkhankut with its caves, mysterious underwater world and endless sandy beaches, majestic cliffs is a real dream for extreme tourists, divers, surfers and archaeologists. Apparently, it is no coincidence that in the Soviet past, this place was so loved by filmmakers.It was on the territory of Cape Tarkhankut that such famous films as “Hero of Our Time”, “Pirates of the Twentieth Century”, “People and Dolphins”, “Amphibian Man” and many others were made. 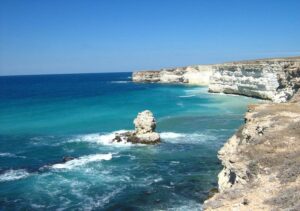 In addition to recreation, here you could significantly improve your health. After all, in the area of ​​the village of Olenivka is the lake Sary-Gol, which has a medicinal brine, which is not inferior in its healing properties to the mud of Sak and Evpatoria. The summer season here usually begins in late May. Due to the dry air in Tarkhankut in the summer is very hot, even if you compare it with other resorts on the Crimean peninsula. After all, here – about 280 sunny days a year! In the period from April to October, the sun shines well on the cape, and the sea water in July-August heats up to +28 degrees. Therefore, Tarkhankut air, impregnated with sea salts, is considered an excellent natural inhaler and is very useful for the respiratory system. Not far from the village of Chornomorsky are Scythian cemeteries and the ancient Greek polis Kalos-Limen.At a short distance from Olenivka rise smaller capes: Small and Large Atlesh. The length of the Little Atlas reaches 100 meters, it is penetrated by a through tunnel. But the Great Atlas is a huge arch, 40 meters long, with grottoes and caves. 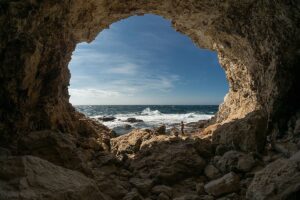 The area is also famous for its reserve “Dzhangulske avalanche coast”, where you could see the landslides and rocks of bizarre shapes, and then – the steppes. There is an ancient lighthouse on the cape, built in 1816 of Inkerman limestone. Its height is 38 meters above sea level. Number of spiral steps – 142. Range of light – 16 nautical miles. In addition to the main lens, which contains two powerful lamps, there is a duplicate lighthouse, located outside the dome, on the terrace. However, the local nautophone, ie an electro-acoustic membrane-type device for giving ships high-pitched signals during fog or gloomy weather, was preserved until 2014. After all, the work of this unique device was once replaced by modern electronics, which was in the building next to the lighthouse. However, judging by the way the new government is in power in Crimea,she will have to resuscitate this relic equipment soon. By the way, an underwater museum “Alley of Leaders” was once created next to the lighthouse. And it seems that the current “leader” knows which country, that’s where the place is!