Stargazers are powerless against boors

Crimea is known in world astronomy at a fairly solid level. There are mountains here, though small, and relatively clean air, and very often the sky is cloudless. And working conditions are more comfortable than in the center of Central Asia.

The Crimean Astrophysical Observatory counts down from the private observatory of Nikolai Maltsov, a wealthy admirer of astronomy, founded at the beginning of the 20th century in Simeiz, on Kosh-Kaya Mountain (also known as Kishka). In 1912 he presented it to the Pulkovo Observatory in St. Petersburg, the leading astronomical center in the Russian Empire. In 1926, a British-made reflector with a diameter of one meter, the most powerful in Europe at the time, was installed on Mount Kosh-kaya. After all, Hissar, Byurakan and Baksan or other powerful mountain observatories of the Soviet Union did not exist then. Their time will come later.

During World War II, the Simeiz Observatory was destroyed. The Germans and Italians ended up with a 40-centimeter reflector made by Carl Zeiss Jena, which Hitler had prepared as a gift to Mussolini for the Italian Astronomical Observatory, and ended up in the Crimea under a reparations program. Over time, mirrors for telescopes began to be made just on the spot, in his own workshop at the observatory.

As the observatory in Simeiz suffered irreparable losses during the war, after the Second World War (formally – even before its end) on March 30, 1945 it was decided to locate the main observatory in a very suitable place for the study of the starry sky, which is now called “Scientific” Bakhchisaray district. Eventually, the Simeiz Observatory was rebuilt, but became a branch of the Crimean Astrophysical Observatory in Nauchny.

The observatory was built in 1946-1955. For the first 30 years, it became one of the world’s leading science centers. The location of the observatory was chosen by carefully exploring the strip from Feodosia to Sevastopol. This place, as it turned out, is the best in the whole Crimea for astronomical observations: far from big cities, from the south there is a state reserve. Its inviolable forest, which stretched for several kilometers, neutralized the dust and prevented turbulence in the air, which greatly contributed to the transparency of the atmosphere. With the annexation of the Crimean Peninsula to the Ukrainian SSR in 1954, this observatory was and still is the largest in Ukraine.

One and a half thousand (!) Asteroids, three comets, many stars were discovered here. It was here in 1958 that Mykola Kozyrev first recorded the emission of gases in the Alphonse crater on the moon, which became a world sensation, as it indicated the possibility of volcanic activity on another celestial body, and for half a century this case remained the only such observation. 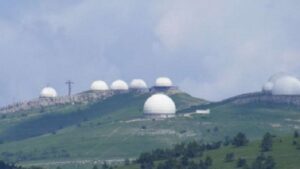 For example, Russia’s oldest Pulkovo Observatory can no longer function properly due to the fact that it was gradually absorbed by St. Petersburg over the decades, and residential neighborhoods are located near it, from which lighting shines at night. Illumination makes observation extremely difficult. This weakens the capabilities of telescopes. The situation is similar with the Kyiv Observatory in Holosiiv, where Yushchenko’s “little Ukrainian” allowed the construction of a medical complex.

Of course, clean air and picturesque landscapes attract not only scientists. The new owners of life in the Crimea – not even ladies, but punks of Putin’s henchmen, have long noticed for themselves this beautiful place for construction.

The first attempts were noticed long before the conquest of Crimea by “green men”, back in 2009. The construction company Consol, which is known to belong not to anyone but to Vladimir Konstantinov, has developed a project of an elite town, behind which it was planned to place houses, entertainment establishments and restaurants just between the domes of the telescopes.

Observation of the stars is incompatible with the “secular life” of the bourgeoisie. Excessive lighting nearby will interfere with the optics of the telescopes, noisy restaurant audiences and thuggish songs are in conflict with the concentration of scientific research.

Then, ten years ago, protests by scientists sparked a wave in the media, and Console’s attempts to seize the “trump” area failed. However, Konstantinov was stubborn and impudent and did not stop his attempts. The project gained new impetus with the coming to power of the regionals: in 2011, local supporters of pro-Russian forces easily, as if cutting a holiday cake, cut off pieces of protected Crimean lands for Yanukovych and Yanukovych Jr. personally. We are talking about thousands of hectares of mountainous Crimea.

To circumvent the legislation, they decided to implement the idea of ​​creating a landscape park with an area of ​​9 thousand hectares, ie a separate legal entity that could independently dispose of land and give permission for construction. Dmytro Tabachnyk, the Minister of Education and Science, personally lobbied for the project in the capital. By his order, his ministry liquidated the Crimean Astrophysical Observatory Research Institute by joining the Kyiv National University. Thus, with the loss of the status of a legal entity, the Crimean Astrophysical Observatory lost the right to land and a protective zone around it.

And soon the occupiers came to the Crimea, and Konstantinov, who was and still is the first servant of Putin, got every opportunity to implement the project. “Console” has already announced the sale of housing in an elite village. And it’s not about cottages, but about high-rise buildings: a new 12-storey building with a spa complex, supposedly a rehabilitation center for veterans of the war against the Afghan people, as well as, probably, both Chechen wars (and eventually, probably, the current anti-Ukrainian war?). In 2015, the company “Console” has already built a residential complex with a cynical name “Forest”.

The forest is being cut down – wood chips are flying, apartments are for sale?

Prior to Russia’s annexation of the peninsula, astrophysicists repeatedly protested against the construction of a protection zone, appealing to the “central” authorities in Kyiv. Then someone else listened to them. If in 2014 one of the Crimean scientists had confidence in resolving painful issues with the advent of the Russian “new order”, now they are convinced that the order is gone, but to protest is no longer allowed.

Alexei Baklanov, scientific secretary of the Crimean Astrophysical Observatory, said in an interview with the Crimea 24 TV channel that the new buildings next to the telescopes would interfere with the observation of the starry sky: and Neptune. It will only get worse over time, so action is needed to address this issue. Such a measure could be the introduction of a protection zone around the observatory. A draft resolution is already available in the Russian government, and we hope that it will go on and on, and so on. Hope, as opposed to dreaming, is often very harmful. Especially considering that the agreement with Russia is not worth the piece of paper on which it is written.

In December 2018, a private developer from Moscow began construction work directly in the 3-kilometer protection zone of the observatory.

And in the current 2019, work is underway on the construction of the Console Hotel, with a soft sign. Well, at least not “Konstantinov” with a solid «

The boors, who finally gained power on the peninsula with the beginning of the occupation, also want to get a place under the sky, in a picturesque area, they also want to breathe fresh air.

The Crimean Observatory was nominated by Ukraine as a candidate for inclusion in the UNESCO World Heritage List, but, unfortunately, consideration of the issue hung in the air due to the occupation of Crimea. If, if, if, if… 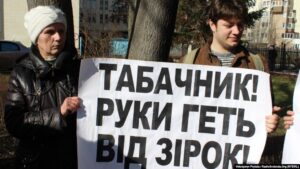 If Crimea remained Ukrainian… If in Ukraine scientific research was paid close attention to the state… If UNESCO included the observatory in the world heritage sites, the construction of this territory would be banned. But without civilized control and support from UNESCO – that status is meaningless.

The starry sky above us and the inner world inside us – this phrase of the philosopher surprisingly clearly corresponds to what is happening in today’s Crimea with the Crimean Astrophysical Observatory. Especially if people with a primitive inner world, who are indifferent to the basics of the universe and the search for truth, become leaders of society and aspire to power.

“Non-recognition policy. How to protect Chersonese from the occupier?”