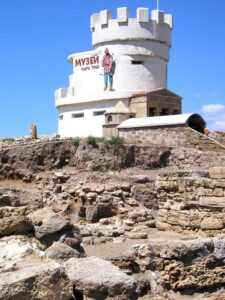 The Sakas have been known since the time of the Crimean Khanate, but the healing springs and muds of the Western Crimea were known even two thousand years ago: Greek geographer Claudius Ptolemy (II century). Not far from Sak are the ruins of Kara-Tobe, a settlement founded before our era. It was conquered by Rome and later fell into disrepair.

However, the fame of Sak as a resort began two hundred years ago. In the first half of the XIX century a military hospital and the first health resorts appeared here.

During the Crimean War, the settlement of Saki suffered significant damage, because nearby, just on the coast, now known for its beautiful beaches, an Anglo-French landing party landed, and fighting took place near Saki. After the war, the Crimean Tatar population mostly emigrated to Turkey, this place was depopulated until Ukrainian peasants from Poltava province began to move here. While milking took place, Ukrainians extracted and transported salt from Lake Saka. 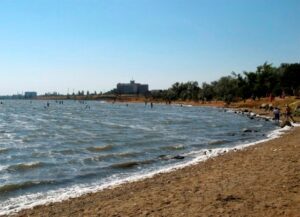 Healing mud attracted people, in particular, and celebrities who suffered from serious illnesses. Gogol and Voloshin were treated here, and Lesya Ukrainka went to the Crimea for the first time here, to Saki. This happened in 1890, but, unfortunately, the medicine of that time prescribed a course that was detrimental to her illness, and the Saxon mud, instead of improving the girl’s health, only harmed her. Here she did not like poetry, and not a single poem of the poetess is dedicated to this town.

Saki became an official village only in the 1930s, and they received the status of a city in 1952. This is the only place in the world where, for almost a hundred years, the resort coexisted with a chemical plant, which produced from brine: bromine, chlorine, potassium permanganate, copper sulfate, magnesium, zinc, rare earth metals, barium… In 2000, chemical production stopped due to bankruptcy. However, salt production from Lake Saka continues to this day.

The city of Saki can be considered exemplary in terms of caring for disabled people in wheelchairs – it is equipped with ramps by 80%. 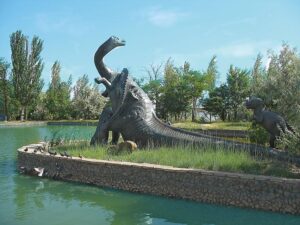 In the Crimea, almost every city, at least from the resorts that take people on vacation or treatment, is different from others, has its own “highlights”. In Saki, this “highlight” is a park with dinosaurs.

Interestingly, the first dinosaur in the Crimea was exhumed only in 1934. But the dinosaur in Saki appeared two years earlier. In the early 1930s, the self-taught Evpatoria sculptor, paleontologist by education Serhiy Likhosherstov created the sculptural business card Sak: four representatives of the glorious dinosaur family in pre-Flood times. Official name: “Fight of brontosaurus with celatosaurs”. The huge, life-size sculptor, a brontosaurus, was attacked by four-meter-long toothed predators, celatosaurs.

There is a legend that at the turn of the 1920s and 1930s near Mykolayivka a storm washed away a part of the shore and exposed the petrified bones of long-extinct animals. A lecture on the importance of such finds was organized for local residents. This event may have prompted the local authorities to include in the plan of monumental propaganda Likhosherstov’s proposal for antediluvian monsters.

Very little is known about the author of the sculpture: he was born in Sevastopol, studied at Kharkiv University at the Faculty of Natural Sciences. Paleontology was his specialty, but life forced him to engage in other occupations. From 1920 Likhosherstov lived in Evpatoria and worked as a teacher. In the 1930s, he somehow surprisingly pushed the idea of ​​an unusual sculptural composition, before, in favor of ideology, erecting a bas-relief on the monument to Lieutenant Schmidt in Sevastopol (which has survived to this day), as well as a monument to the liberated work in Saki: hammer chains that encircled the globe. 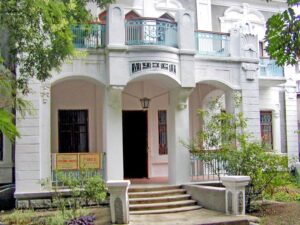 Likhosherstov invented the material for making dinosaurs himself – sawdust mixed with magnesia cement, which was produced at that time at the Saksky Chemical Plant.

At that time, this composition did not correspond at all to the Bolshevik plan for the development of monumental art, because at that time monuments were erected to the leaders of the world proletariat and to numerous, albeit monotonous, girls with oars.

Perhaps officials from ideology and culture were struck by the deep symbolism, and they decided that it meant class struggle or reflected the difficult international situation before the new world war? The struggle of species according to Darwin’s theory? Favorite means of socialist realism – the struggle of good with the best? 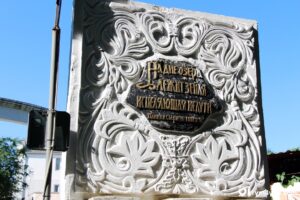 World War II caused significant damage to the sculpture, but minor. “Brontyk” was quietly destroyed throughout the postwar period, and the restoration of the sculpture was ventured only in 1982. The new dinosaurs were recreated according to Likhosherstov’s plan, but from concrete. And in 2005, the city council approved the silhouette of a prehistoric giant on the coat of arms of Sak.

Western Crimea, with its wide steppe and salty winds, begins in the Saksky district. It is possible that this region did not inspire artists with picturesque landscapes like the South Coast, but it has its own unique face. And he has something to be proud of.