Sacrament and vandalism against the House of the Lord 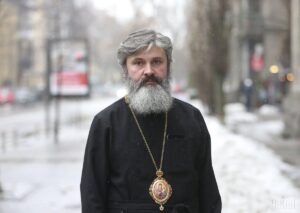 The struggle of the Soviet government with the church began a hundred years ago, in 1918. However, for the most part, church property was confiscated at that time, religious buildings were closed, and mass destruction of temples was almost non-existent, which began a little later. However, the “glorious” Bolshevik descendants learned the lessons well, and in their actions and deeds went far ahead of their “teachers”. A striking example of this is the situation around the Cathedral of Saints Volodymyr and Olga in Simferopol, which is actually the only church of the Orthodox Church of Ukraine on the peninsula.

As you know, on June 18, 2019 in the premises of the Cathedral of Saints Vladimir and Olga of the Crimean Diocese of the PCU, the so-called Ministry of Property of the Crimea began construction work. Without warning the diocese, the builders dismantled the roof of the church. After that, heavy rains fell several times in Simferopol, as a result of which the temple building was flooded.

On June 28, the so-called Arbitration Court of the Republic of Crimea ordered the Crimean Diocese of the Ukrainian Orthodox Church to hand over the building of the only church in Simferopol to the Ministry of Property and Land Relations of the Crimea.

And on July 24, the property of the Cathedral, according to the Archbishop of the Crimea and Simferopol PCU Clement, was “looted and broken.” ” The situation is very critical. Everything happened when I was not in the Crimea. According to the court decision, in 2017, 110 square meters of the first floor were confiscated. It was sealed and locked. But at the same time the church property was described and preserved: chairs, icons, furniture, carpets, utensils, tables, tableware . Now it is all looted and broken. I saw some things on the street at the landfill. I don’t know where other things have happened, “Bishop Kliment said in a comment for the CrimeaReality project. «They started the pogrom just when I was at a conference on religious freedom. It is Russia that shows the whole world that for it (it means) world society and religious freedom , ”the archbishop stated.

Of course, this glaring event, due to its cynicism and arrogance, upset Ukrainian society and provoked a corresponding reaction in state and religious circles.

“Such developments regarding the religious community of the Ukrainian Orthodox Church (PCU) are absolutely predictable, as systematic pressure and persecution has continued since the first days of the occupation of the Crimean peninsula,” the Ministry of the Temporarily Occupied Territories and Internally Displaced said in a statement. persons of Ukraine. – After all, from the first days of the occupation, the Church made sharp statements about Russian aggression, in addition, it is the only religious organization that refused to re-register, as required by the law of the aggressor country. It is no exaggeration to say that the PCU in Crimea is today one of the symbols of nonviolent resistance to the illegal attempt to annex the Russian peninsula.

We will remind, till 2014 in the Crimean eparchy of UOC KP there were 46 parishes, 3 orthodox fraternities, 1 mission and 1 man’s monastery. During the 5 years of its existence under occupation, the Church remained with 9 parishes and 4 clergy.

Metropolitan of Kyiv and All Ukraine of the PCU Epiphanius also reacted very sharply to the destruction of the church.

“The Russian occupation authorities in Crimea continue to attack religious freedom. For the past five years, Russian officials have been systematically destroying Ukrainian Orthodox communities in the occupied Autonomous Republic of Crimea through pressure, intimidation, and illegal government decisions. The occupation authorities are fighting with special cunning against the center of the Crimean Diocese of the Orthodox Church of Ukraine – the Cathedral of Saints Volodymyr and Olga in Simferopol.

I express my deep indignation at this next fact of violence of the Russian occupation authorities against our religious community in Crimea! I remind those who are directly involved in the violence against the temple: you are committing not only a crime under human law, but also vandalism against the house of the Lord and sacrilege, which are grave sins before God. It is especially cynical to commit such crimes before the feast of the cathedral and the day of the Baptism of Kyivan Rus-Ukraine, the events of which are known to be historically connected with the land of Crimea… “- said in his statement the head of the PCU. 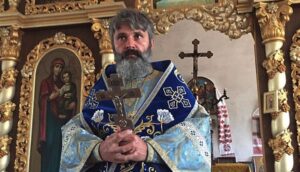 And on July 27, 2019, a regular meeting of the Holy Synod of the Ukrainian Orthodox Church (Orthodox Church of Ukraine) chaired by His Beatitude Metropolitan Epiphanius of Kyiv and All Ukraine took place. At the meeting, the Holy Synod was one of the first to make the following decision on the situation in Crimea:

«1. To express strong protest and deep indignation at the continuing violence of the Russian occupation authorities against the Orthodox Church of Ukraine in the Autonomous Republic of Crimea and Sevastopol, which has recently manifested itself in the deliberate damage and looting of the building and property of the Cathedral of Saints and Apostles Volodymyr Apostolic Orthodox Church (Orthodox Church of Ukraine) in Simferopol, in creating obstacles for access of the clergy and the faithful to the church and the diocesan administration. The Orthodox Church of Ukraine once again demands that the Russian Federation stop deliberately violating one of the fundamental human rights in the occupied Autonomous Republic of Crimea and the city of Sevastopol – the right to freedom of conscience and religion.

Remind those directly involved in the violence against the cathedral of the Crimean Diocese of the Ukrainian Orthodox Church (UOC), including Russian “courts”, “bailiffs” and employees of the occupation “Ministry of Property”, that their actions are not only a crime under human law, but the grievous sin of sacrilege and the plundering of the consecrated house of God.

To call on the Ukrainian and international community to demand that Russia stop violating the rights of the Ukrainian Orthodox
community in Crimea and to bring the perpetrators to justice, including tightening international sanctions against the Russian Federation and specific officials of the “court”, “bailiffs”, “Ministry of Property” and others. , directly involved in the violation of the right to freedom of conscience and religion in the occupied Autonomous Republic of Crimea “.

The Permanent Representative of the President of Ukraine to the ARC Anton Korynevych, who appealed to the Prosecutor’s Office of the ARC regarding the destruction of the Cathedral of Saints Volodymyr and Olga of the Orthodox Church of the Holy Apostles in Simferopol by the occupation authorities, did not delay. This was reported on the representative’s Facebook page.

” The Representation of the President in the ARC emphasizes that these facts indicate a blatant violation by the occupying power of international humanitarian law, fundamental human rights and freedoms, namely the right to freedom of religion, a possible violation of Art. 56 Regulations on the Laws and Customs of War on Land, which is an annex to the IV Convention on the Laws and Customs of War on Land . In this regard, the statement reads, “The Mission requested the Prosecutor’s Office of the Autonomous Republic of Crimea to provide a legal assessment of the above facts and to respond appropriately to the actions of the occupying power.”

The situation in Crimea after the annexation reminds us in many ways of the events of centuries ago, and not only in relation to the destruction of churches. The so-called “nationalization” that the occupying power only began to receive in 2014 and which provided for the “squeezing” not only of Ukrainian state-owned enterprises and private business, but also of land and real estate, is in fact the same “expropriation” that conducted by the Bolsheviks a hundred years ago. What’s next – “red terror”?

– On May 29, 2015 in Simferopol the auction of rent of the room with the area of ​​112,6 sq.m. took place. m, located on the 1st floor on the street Sevastopolskaya, 17, which was leased by the Crimean Diocese of the UOC-KP. The auction was organized and conducted by the “Ministry of Property and Land Relations of the Republic of Crimea” without notifying the tenants of the premises. Archbishop Kliment, the head of the UOC-KP eparchy, was not allowed to attend the auction. The competition for renting the premises was won by the Public Non-Profit Association for the Development of Small and Medium Business in the Republic of Crimea “RAZUM”.

– In early 2016, the Crimean Diocesan Administration of the UOC-KP, by decision of the Arbitration Court of the Republic of Crimea, deprived part of the premises in the center of Simferopol, which houses the Cathedral of the Holy Apostles Prince Vladimir and Olga.

– On June 14, 2016, the Court of Appeal of Sevastopol ordered the Crimean Diocese of the Ukrainian Orthodox Church to pay the Ministry of Property and Land Relations of the Republic of Crimea a fine of half a million rubles and release 112 square meters. m on the ground floor of the Cathedral in Simferopol.

– On November 8, 2016 in Simferopol, representatives of the so-called “Crimean Property Fund” tried to seal the first floor of the Cathedral of Saints Volodymyr and Olga UOC-KP. Archbishop of Simferopol and Crimea UOC-KP Kliment called on the world community to protect the national, cultural and religious rights of Ukrainian citizens in Crimea.

– On August 31, 2017, Russian security forces blocked the Cathedral of the Holy Apostolic Princes Vladimir and Olga of the UOC-KP. The temple was surrounded by special forces soldiers. Russian bailiffs, without providing any documents to Archbishop Clement, removed the church property from the chapel of the Cathedral. At the same time, they did not make a description of things, and did not offer the archbishop to sign any act on the seizure of church property.

– On March 3, 2019, Archbishop of Simferopol and the Crimean Orthodox Church of Ukraine Kliment was detained by Russian police in Simferopol. For almost the whole day, Bishop Kliment was apparently detained by local law enforcement officers under contrived pretexts. At first, they wanted to interrogate him about his alleged robbery of his church (!), And later transferred him to another department because of a statement about “obscene swearing” (!), After which he was released in the evening without a report.

– On March 14, 2019, the Ministry of Property Relations of the Republic of Crimea filed a lawsuit with the Crimean Arbitration Court to terminate the lease agreement for premises in Simferopol, which houses the Cathedral of Saints Vladimir and Olga of the Crimean Diocese of the PCU. The basis in the statement of claim is a debt in the amount of 2.95 hryvnias and a fine in the amount of 5.24 hryvnias, which allegedly arose in 2016. Bishop Clement claimed that there was no debt and that there were payment documents for it. 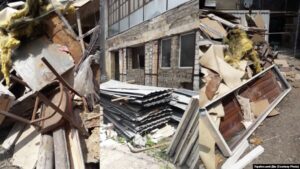 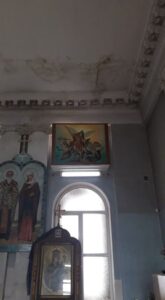 – On June 18, 2019, in the premises of the Cathedral of Saints Vladimir and Olga of the Crimean Diocese of the PCU, the so-called Ministry of Property of the Crimea began to carry out construction work. Without warning the diocese, the builders dismantled the roof of the church. After that, heavy rains fell several times in Simferopol, as a result of which the temple building was flooded.

– On July 24, 2019, the property of the Cathedral, according to the Archbishop of the Crimean and Simferopol PCU Clement, was “looted and broken.”

– On August 2, 2019, the occupying power of the peninsula of the Crimean Diocese of the Orthodox Church of Ukraine again denied registration to the Ukrainian Orthodox Parish.