The tsarist government had to take decisive measures to compensate for the shortage of working population. The lands left by the Tatars were intended for settlement by natives of the Russian Empire. Again, all those wishing to move to the Crimean peninsula were widely encouraged. The government also resorted to the old method – to invite foreigners to settle: Germans, Bulgarians, Greeks.

From 1719 to 1858, population censuses were conducted through audits. They testify to how many new settlers arrived in the Tavriya province. (Table 1)The first large party of colonists numbered 1.5 thousand families and consisted of peasants who were resettled on the land of the Tatars. Then the Estonians arrived in Evpatoria and Perekop counties, who were also placed in Simferopol. Czech emigrants and Germans were taken to Perekop County.

The forced emigration of the Crimean Tatars and the resettlement policy of tsarism changed the ethnic composition of the Tavriya province. The number of Russians, Ukrainians and Belarusians (under the general name “Russians”) at the beginning of the 1860’s was 370.5 thousand people, the Tatar population – 100 thousand, the Germans – 45.7 thousand, the Bulgarians – 21.4 thousand ., Jews – 14.3 thousand, Greeks – 13.3 thousand, Armenians – 6.3 thousand, Estonians – 800, Czechs – 600 people. The total population reached 573 thousand people.Thus, in 140 years, up to 200 thousand migrants arrived in the Tavriya province. The resettlement continued. During 1861-1886 the population of the Tavriya province increased due to the arrival of settlers by 156,012 people. It is clear that the number of migrants who moved to live on the peninsula was less than in the province as a whole, but not much. Due to the influx of a large number of migrants of different nationalities, the population of the peninsula over time became more diverse in its ethnic composition. Thus, according to the 1897 census, there were 1,447,790 inhabitants in the territory of the Tavriya province, including 546,592 people on the Crimean peninsula. There were 39 ethnic groups, 13 of which were identified as the largest. ( Table 3 ) 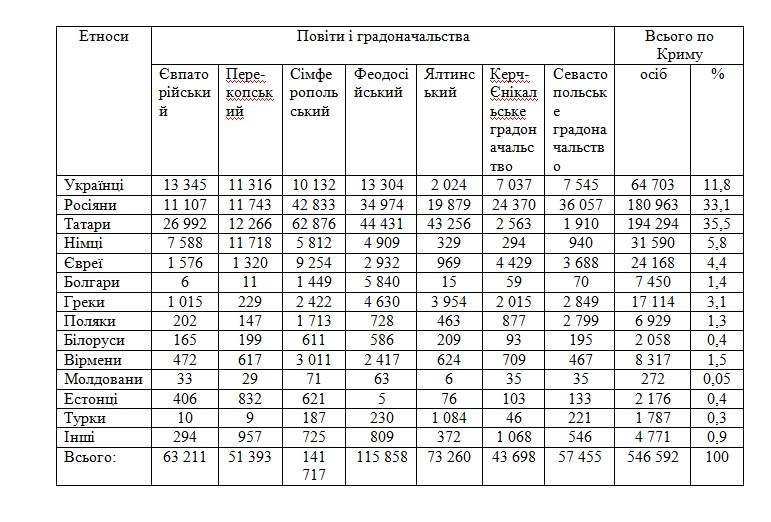 The development of Crimean cities, which became administrative centers or trading ports to meet the needs of the army and navy, led to the majority of the population becoming Russians. As for the Crimean Tatars, at that time most of them lived in mountainous areas – up to 89%.