Religious persecution began in Crimea in 1829. The government decided not to provide passports to those Tatars who sought to perform the Hajj to Mecca, and did not allow them at all to come into contact with the spiritual institutions of the Muslim East. After all, those who visited the hajj brought with them a new force of religious spirit and spread it among the locals.

In 1836, a law was passed according to which only a mullah who did not raise questions about his own “trustworthiness, loyalty and good behavior” could hold a clerical position. Since then, police and gendarmes have checked all political mullahs, imams and muezzins for “political credibility.” Those who showed national well-being and contributed to the development of national culture had to be removed from office. However, even a positive response from the gendarmerie could in no way help those who made the trip to the Ottoman Empire. These persons were forever forbidden from any spiritual activity. Moreover, a Tatar who was educated abroad could not become a mullah.All those who performed the Hajj were supervised, and many were even sent to Kaluga and Yaroslavl. At the same time, it was decided to legislate the long-established unofficial norms on the territory of the peninsula, adopted in the Russian Empire, according to which the mosque could be opened only when there were at least 200 male parishioners.

The mufti was still elected by the Tatars themselves, but only from among three candidates whom the governor considered “trustworthy.” There were cases when governors generally tried to push a person under their control to this position.

To govern the Muslim population of the peninsula, the state in 1871 formed the Taurian Mohammedan Spiritual Assembly. It was to carry out a state inspection of the theological training of ministers of the faith elected by local Muslims. The results of this inspection were sent to the provincial administration, and only after that the person who was inspected could obtain a permit to serve in the mosque. At the same time, new Muslim mosques were not purposefully built on the peninsula. Instead, more and more Orthodox churches were being actively built.

The tsarist government consistently pursued a policy of reducing the number of Tatar schools. The greatest oppression was suffered by traditional mektebs – parish schools, in which Crimean Tatar children of both sexes from 6 to 15 years of age received general education. If at the beginning of the XIX century. on the peninsula there were 1,556 mektebs, then in 1890 – 275.

The state of affairs with the level of education deteriorated even more when in 1915 the director of public schools S. Margaritov issued an order to close the Crimean Tatar schools, if they began to teach general education subjects.The level of education provided in the traditional mekteb was quite low. In addition, due to lack of funds, they had poor learning conditions. Contemporary F. Andriyivsky noted: “ Mektebs are rather poorly equipped. Thoughtless memorization only kills children’s abilities. Mektebe and their arrangement do not withstand any criticism from a sanitary point of view. Here you can often see even six-year-old children who are engaged almost all day, sitting on the floor in a cramped, dirty and damp room .

This state of affairs led to the fact that almost all Crimean Tatars did not know Russian and were not able to study in high schools because of their difficult program for Tatars. Ethnographer Markov quite eloquently described what exactly these attempts ended Tatar children ” faint (tatarchata. – Ed.) Two or three years and get away back because they have no opportunity to examine the entire mass of Latin, Slavic, German, French, of all humanities and real sciences, which fill our gymnasiums to the brim . ” 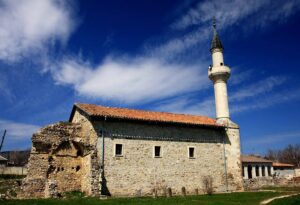 Good education was provided by madrassas, which were at the same time theological academies, teachers’ seminaries and general educational institutions and therefore had a strong influence on Crimean Tatar society. For example, Tatar and Arabic languages ​​and writing, mathematics, ethics, calligraphy, logic, poetics, Muslim law, theology, content and interpretation of the Sunnah and the Koran, Russian were studied in Zinjirli Madrasa (Bakhchisarai) for 10 years of study. language. However, for the full functioning of the madrasah needed subsidies (for each madrasah required about 7-8 thousand rubles per year). The state refused to provide such an amount, and the endowment treasury did not have the necessary amounts for a long time. All this led to the fact that from the time of the conquest of Crimea by the Russian Empire until the end of the XIX century. the number of clergy who have received higher education,decreased almost 7 times – from 5 thousand to several hundred people.