Today is the time when the Crimean Tatar people are trying hard to preserve their cultural heritage, being both in the Crimea and far from home. We are building anew, on a brick, what our parents have been building for 20 years, returning to their homeland. 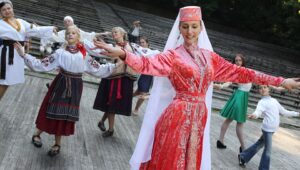 Our culture is multifaceted, our music is breathtaking, and our dances are mesmerizing. Each Crimean Tatar dance is a reflection of the identity, traditions and customs of our people, so the audience is always watching the dance with interest. If we turn to the origins of folk dance, we can find the fact that previously the Crimean Tatars did not have stage dances. First of all, this is due to the fact that people usually gathered at any celebrations and simply improvised to music, for example, at weddings. Among the rites of the Crimean Tatars, the wedding occupies a special place because it is an important event dedicated to the formation of a new family. Weddings were always fun, with live music and dancing. Some sources say that earlier, during the wedding, women and men danced in different parts of the house.Ethnographers describe an ancient tradition: under the hat of the best dancer put money for a good performance, which after the event was given to musicians. It is in this case that there was a kind of professionalization of dance as such, because the dancer performed it not only for himself but also for the audience. As a result, all the masters of Crimean Tatar choreography received their choreographic education at weddings, became the pride and heritage of our nation.have become the pride and heritage of our nation.have become the pride and heritage of our nation.

Crimean Tatar choreography is very atypical, diverse and fascinating. The main elements that are part of the choreographic art of the Crimean Tatars are the lack of very sharp hand movements. Men’s dances, which glorify courage, strength, and military skill, have a wonderful temperament. A stately slender body, arms outstretched in different directions and elbows bent in half – the main provisions of the Crimean Tatar men’s dance. Soft wavy hand movements in front of you, as well as rotational hand movements are used. In women, the body is slender, graceful and majestic. The arms are spread in different directions, a little below the shoulders, soft wavy hand movements are applied in front of you and from right to left. The main movements of the feet – a variable step on the toes. Crimean Tatar dances are rich in body turns in both women and men.

The most popular dances at the moment are “Haytarma”, “Khoran”, “Aguir ava ve Haytarma”, “Yavluk Avasa”, “Tim-tim”, “Emir-Jelal” and the men’s dance “Shepherd Avasa”. For example, at a wedding, guests always perform the dance “Horan”. The bride and groom stand in the center of the circle, forming a circle of dancing girls and boys around them. This dance reflects the sun with its pattern, while the dancers, holding their shoulders, move in a circle. The center of the circle symbolizes the center of the universe. Earlier, according to ethnographers, this dance was performed to the musical accompaniment of a lyrical nature: “In the dogwood forest” or “Varyrach”.

The Haytarma dance (“Return”) reflects the image of an ordinary person, so the dancer’s movements must be restrained. Many performers take part in this dance, so “Haitarma” is still the favorite dance of the Crimean Tatars. Usually a variety of “Haitarma” sounds at weddings or celebrations of folk customs, it is indicative, often performed by two or three pairs of dancers. Very solemn and graceful is “Agyr ava ve Haitarma”, the first part of which is more static, slow and smooth, and the second part is temperamental, fast and cheerful. In ancient times, this dance was called “Akai Avasa” – a male dance, and it was danced only by men in pairs or individually. “Akai Avasa” expressed the strength and dignity of a man. After a while, both a man and a woman, or several couples at once, began to dance it. The people have an abbreviated name of the dance “Karshilam”,which means “face to face”.

Almost no wedding takes place without a solo dance “Tim-tim”, which originates from Feodosia. This dance has no obligatory figures, so dancers often improvise freely. From ancient times “Tim-tim” was danced by men, but later women began to dance as well. The main and most difficult movement of this dance is the trembling of the hand, when each bone of the hand makes its own small movement. According to legend, each movement of the fingers should correspond to the sounds of violin strings, telling the story of a violinist in love with a beautiful girl “Tim-Tim”. Interestingly, all couple dances at a wedding are accompanied by a gift of money, but this is not a demonstration of wealth, it is a symbol of the transfer of positive energy through money. The fragile female dance “Emir-Jelal” shows the figure of a beautiful Crimean Tatar girl, who slowly seems to float to the music, performing gentle wave movements with her hands.Like Aguir awa ve Haitarma, this dance also consists of two parts, slow and fast. The main movements of the slow part of the dance are small pleats and hand turns. The turns are performed directly at the moment of playing on the strong parts of the music. 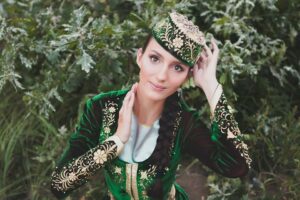 “Shepherd Avasa” is a traditional male dance that embodies the state of the image of a proud Crimean Tatar. “Shepherd Avasa” – a dance of shepherds, very expressive and clear in the performance of movements of the legs and arms, it is in this dance that the boys seem to compete in their dexterity and agility. If the shepherd suddenly loses the sheep, everyone else will look for it, and when they find it, they will gladly rush to the dance. The peculiarity of this dance is that it is performed with an object, namely – with a shepherd’s staff. “Yavluk Avasa” is a dance with a handkerchief, often performed at weddings and holidays. In this dance, the boys seem to call out the girls, who are a little embarrassed at first, but later also join the dance. Each girl in the dance carefully lays a handkerchief on the floor so that the boy can lift it. But not just to raise. Raise, for example, from the position of the twine,or making a rotational movement of the body through the head to the feet, without using the hands.

The original traditional dance “Jiin” is performed during the pre-wedding ceremony of Kina Gejesa (henna night), when the bride’s hands are painted with henna. It is believed that the more painted the hands of the bride, the richer will be the common life of the young. According to ethnographers, both girls and boys used to perform “Jiin”, but the girls were in a separate room and sang along, and the boys danced on the roof to instrumental accompaniment. Moments of improvisation are also present in Crimean Tatar choreography, but they do not change traditional movements.

Crimean Tatars have a tradition – to start teaching their children to dance from an early age. Some become great dancers, and some learn just for themselves. That is why almost all Crimean Tatars are able to dance and move well to music. The construction of the Crimean Tatar dance has such a concept that from childhood the correct breathing and the ability to hold the body correctly was formed. Every Crimean Tatar family, despite the difficulties of moving and returning home in the 90s, tried to preserve the traditions, way of life and culture of their people. And now a lot of effort is put into the development of choreographic art by such meters as Usein Bakkal, Selime Chelebieva, Rustem Gaziev, Remzie Bakkal, Enver Alimov, Hayri Emir-Zade, Shahzade Mamutov, Akim Dzhemilev and Refat Asanov.

Ethnogenesis of the Crimean Tatars