Crimea is a unique region of our Motherland, and in the depths of history we can find similarities between the fate of this Black Sea peninsula and the fate of another Ukrainian region – Poltava.

Let’s look at the turbulent days of the Middle Ages. In the XIV-XV centuries. With the active support of the Grand Duchy of Lithuania and Russia, two young states emerged on its outskirts, in the former lands of the Golden Horde, one the well-known Crimean Khanate and the other the undeservedly forgotten Hlynsk principality in Poltava.

Recognizing the power of Prince Vytautas, the descendants of Mansur-Kiyat and Oleksa became known as Princes Hlynsky. And until the middle of the XVI century. they still signed the documents with their family name Mamai.

By agreement with the Lithuanian princes, the descendants of the warlike Golden Horde were to take part in the wars waged by Lithuania. Subsequently, the Glinskis significantly expanded their possessions far beyond Poltava to the modern lands of Kharkiv, the south of Chernihiv and Sumy, the left bank of Cherkasy, as well as the Belgorod and Kursk regions of Russia. By the beginning of the XVI century. the principality retained internal autonomy. The power of the princes was friendly to the subjects: the heads of local communities and their military leaders were elected by the population, taxes were not paid, land was not taken from the owners, but there was military duty: by order of the princes men had to go to war under their prince. But whether or not the princes decided to start military action not arbitrarily, but only with the permission of the people. In its organization and management, the principality resembled not a feudal monarchy, but a later Cossack state and,rather, it was its prototype. Prince Bohdan Fedorovych Hlynsky in 1488-1495, being the Cherkasy voivode, organized Cossack detachments on the Cherkasy border, making a significant contribution to the founding of the Ukrainian Cossacks. His baptism of fire was the capture of the newly built Crimean fortress on the shores of the Black Sea Ochakiv in 1493. After this event, the name of the Cossacks became known outside of Ukraine, and the figure of the Cossack Mamaia became the archetype of a brave warrior – a defender of the Fatherland. The image of a Cossack with a bandura sitting in Turkish with his legs folded has become a popular subject of Ukrainian folk art. Paintings with the Cossack Mamay were known throughout Ukraine, but were most widespread in the former Hlynsk principality.

The ethnic face of the region was interesting. There lived the descendants of the East Slavic tribe of the Northerners (later known as the Sevryuks), as well as the Turks – the descendants of the Polovtsian-Kipchaks and natives of the Golden Horde Tatars, who at the beginning of the principality were the majority of the population. From the beginning of the 15th century, the Sevryuks gradually assimilated the Turks, and the Slavs later began to outnumber them.

In 1508, the Glinski princes tried to break the alliance with Lithuania and go to the service of the Moscow princes, for which they paid with the loss of their land. Once a single principality turned into a series of land holdings, but much of the Glinski family was able to preserve their heritage. Similar processes of state formation took place on the same meridian south of Poltava region – in the Crimea. 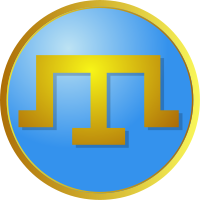 The founder of the Crimean Khanate and its first ruler was Haji Geray. The biography and circumstances of the life of this monarch are quite interesting: he owed his power over the Crimea, and hence the establishment of the Crimean statehood, to the rulers of the Lithuanian-Russian state. The future khan was born and lived for a long time in Lithuania, where he owned the city of Lida. In 1428, enlisting the support of Prince Vytautas, he tried to conquer the Crimea, but failed and returned to Lithuania. The second attempt to become the ruler of the Crimea, made in 1431, was also unsuccessful, and only the next time, in 1441, when Lithuanian Prince Casimir at the request of the Tatar aristocracy sent him to reign in the Crimea, Haji Gera was lucky: he finally established himself in Crimea as the ruler of a new state – the Crimean Khanate.

The reference to Haji Gerai’s friendship and allied relations with Kazimir contains correspondence between the rulers of Crimea and Lithuania throughout the 16th century.
After gaining power, the Crimean khan moved the capital of his state from the city of Kirim, which is now called the Old Crimea, to the hidden in the mountains of Kirk-Or, now known as Chufut-Kale. In a few decades, in 1502, the Crimean Khanate put an end to the existence of the Golden Horde state, that is, what was left of it at that time, capturing lands far beyond the peninsula, including the Don and Volga basins. The Crimean Khanate extended its possessions to the vast expanses of modern Eastern Ukraine and Southern Russia, but could not hold them for long: as early as 1556, the Volga-Don interfluve became part of the Moscow State.

In addition to the circumstances of origin, the two states were united by a common heraldic symbol of the ruling family – the tarak-tamga.

Tamga was a sign of a certain kind or even tribe and translates simply: “sign” or “letter”. This sign has traditionally been used as a brand and seal. Tamga – as a word and as a phenomenon – was especially widespread in Central Asia, the Caucasus and Eastern Europe during the Golden Horde and became associated with the documents of this state – the Khan’s labels with seals. These signs themselves are many centuries older than the Horde era. In our area tamgas were also used by Sarmatians and Bosporan kings. How exactly was it used? First of all, they marked their property with tamgas: cattle, utensils, weapons, houses. Among the peoples living in our time, tamgas are common among the Mongols, Kyrgyz, Kazakhs, Uzbeks, Bashkirs, Mari, Tatars, Nogais, Crimean Tatars, Karachays, Balkars, Abkhazians, Abazins, Circassians, Ossetians, Vainakhs, namely the word “Tamga” »Is of Kyrgyz origin. 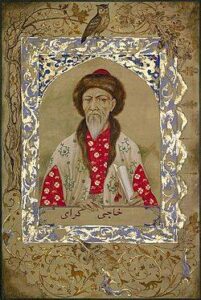 The creators of tamgas were inspired by simple geometric figures and stylized images of household items, animals or weapons, often tamgas became letters – many of them resemble the letters of the runic alphabet. The main condition is the simplicity and conciseness of the sign, its easy recognition and the possibility of variations: for example, on the princely tamgas of the times of Kievan Rus, depending on the preferences of the owner, the trident could be transformed into a two-toothed and vice versa. Thus, the trident of Prince Volodymyr and other representatives of the Grand Ducal Rurik dynasty is a classic tamga, which has its roots in the distant Sarmatian past of our land, so a few centuries later, during the Commonwealth, the Ukrainian and Polish nobility became popular fashion for the Sarmatian decline. But for now we will not talk about the prince’s trident, but about another tamga similar to it,which united such regions as Crimea and Poltava region.

The first khan of the Crimea, Haji Geray, was the first to use the tarak-tamga as a symbol of khan’s power, minting his coins with the image of this symbol. “Tarak” in Crimean Tatar means “crest”. The Khan’s palace in Bakhchisarai is decorated with his images. With the revival of the Crimean Tatar statehood in 1917-1918, the kyok-bairak (blue flag) with the golden tamga of the Heroes was adopted as the national flag.
The princes of Hlynsk had almost the same tamga as their coat of arms, only on a red background. Interestingly, in later Polish coats of arms, the coat of arms with a tarak-tamga is called the Kirkor coat of arms, which also takes us to the Crimea, to the already mentioned cave city of Kirk-Or (Chufut-Kale), the capital of Khan Haji Gerai. 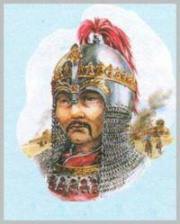 Thus, two young states – the Crimean Khanate and the Hlyn principality in Poltava region – emerged in one historical epoch of the collapse of the Golden Horde, with the blessing and direct participation of Lithuanian-Russian princes, both had an ethnically diverse population, much of which was Turkic. -Kipchaks, and crowned this kinship a common coat of arms in the form of tarak-tamga, now better known as the national emblem of the Crimean Tatars. The historical destinies of the two states have developed differently. Unlike Poltava, Crimea was not part of the Lithuanian-Russian state. The Khanate found another patron – the Turkish sultan. And from the principality of the descendants of Mamaia later emerged the Cossack statehood, which had its own difficult history of relations with the Crimea. However, Ukrainian-Cossack and Crimean Tatar state traditions have common roots.

Author of culturological materials, head of the Kharkiv Karaite Community, historian
Share this

Myrmekion. Consequences of the occupation for cultural heritage