Our “Domus”, or as the Crimean sun warms the people of Lviv

Natalia Menshikova was born in the Crimea, which four years ago, immediately after the infamous “referendum”, was forced to leave and move to Lviv. Here she found like-minded people and created an amateur-professional theater “Domus”, which translated from Latin means “home”. The theater operates in the “sleeping” Sykhiv district, where more than two hundred thousand inhabitants. Of course, there is a lack of cultural and educational institutions for such a large number of people. So “Domus” is a vivid example of how the Crimean cultural presence (Natalia Menshikova is a professional director) enriches the spiritual life of Galicians. However, the latter also do not stand aside, but help the new team in every way. And Lviv actor Denis Fedeshov became the director of the theater.

We met Natalia in the Crimean Bakery cafe, which was also founded by Crimeans. The woman speaks Ukrainian easily and effortlessly. Even too good for a Crimean woman. I start by asking you to tell me a little about yourself and your roots. Not everyone will be able to do this: suddenly gather and move from the sunny Crimea to distant Galicia. Especially considering that so many negative myths about our region have been invested in the minds of Crimeans. The director’s answer completely satisfies me. And involuntarily contains a lot of information about the state of Crimean Ukrainians until 2014. Not all there are “perekotypolya” and seekers of a better life. Not all are descendants of the KGB and the military, with whom Moscow generously stuffed Crimea until 1991.

Some of the inhabitants of the peninsula have deep Ukrainian roots: “My mother was born in the Crimea, all Ukrainians are in her line,” says Natalia. – My paternal grandmother also lived in the Crimea. My father was born in Cossack Zaporozhye, and his mother once lived in the Kuban for a long time. Kuban at that time was still Ukrainian-speaking and sang Ukrainian songs, so my grandmother was formed almost Ukrainian. And I could speak Ukrainian very early, especially since we taught it from the second grade. Our school was Russian, but anyone who wanted to know the language knew. ” Then I learned that Natalka’s father was a military lawyer, and his first specialty was an English teacher. My mother was a commodity expert. A wide range of specialties… That is, you can not say that the child grew up behind the scenes. What then prompted the theater? Natalia’s answer involuntarily gives a warm attitude to her father: “Although my parents had nothing to do with the theater, I went to the library with my dad when I was little. He was given many books, and he read aloud to me. From the age of six, I went to the library myself and read books. I remember that in that period I gained a lot of knowledge from books. The influence of the father was huge! Although he did not incline me directly to the theater, he clearly inclined me to knowledge. Unfortunately, children now read less. The age of the computer has come… ». Here Natalia Menshikova draws attention to the books in the hands of a boy who first visited the “Crimean pastry” and took a few books from the shelves in the center of the hall. She praised his choice: “I took good books.” “Deeply there is a teacher…” – in turn, I think, and I decide to ask if she was acquainted with the head of the Simferopol studio “Dawn” Alla Petrova? She also knew how to work with children. 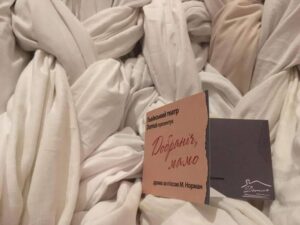 “There were many theater studios in Simferopol,” says the director, “and” Dawn “, and” Torch “, and many, many others. Personally, I was not acquainted with Alla Petrova. But I understand that those Crimean studios that remained there, as well as those that have already been established here, will fulfill their mission. Our theater in Lviv is to some extent a thread that connects Lviv with the Crimea. There is one important thing to know. A person who was born among so many elements: here you have the sea, here you have the mountains, the steppe, and the unique Crimean air, will inevitably be formed by all these factors. And will be the carrier of the Crimean energy. It will definitely bring something of its own to mainland Ukraine! We created the play “Good night, mom” here. There is even a musical accompaniment by a Crimean author. He is completely pro-Ukrainian, although he was forced to stay on the peninsula. He has several pieces of music,some suit us. We chose one of them in the above play. And the performer there is a Crimean. And German friends who came here recorded the sound. Such is the interesting Crimean-Lviv-German cultural cooperation… This Crimean citizen is still ready to cooperate with us. He calls us from time to time… ».

* * *
By the way, “Domus” is not limited to performances in Lviv. We have already visited Luhansk region and plan to go to Slovyansk and Kramatorsk. The creative energy of a small team constantly needs a way out, so Natalia Menshikova seeks to expand the geography of activities. Proudly tells:
“Last summer we went to Severodonetsk and Novy Aidar. We launched a new project: “Live now, work together!”. We held master classes for both migrants and the local population. They wanted to unite people in this way. And our main goal was to convey to people the idea: we need to live now! Life cannot be postponed. We staged the play “Butterflies Free” there. The author of the play is Leonard Gersh. We were very warmly received by the audience, although the play was in Ukrainian… As you can see, the language did not stand in the way! Some people still write us letters from there, inviting us to visit again. ”

And I remembered how last winter Dukach, an interesting creative team from Pokrovsk, visited Sykhiv. They were accompanied by a young journalist, Olena Zaika, with whom we exchange letters from time to time. Immediately after the trip to Lviv, she wrote: “Do you seriously think that our children might not like Lviv? They are delighted, and most importantly – they will now pass these emotions on to their friends, acquaintances, relatives… Such meetings should definitely be held! And must be bilateral. We understand that we can hardly surprise the inhabitants of Western Ukraine with anything, but we are able to present our land to them with dignity. I really hope that soon we will be able to host delegations from Galicia and Bukovina, and that it will not be scary to come to us. We do everything in our power to do this… ».

So, in my opinion, this arrival of Donetsk would also be impossible without the participation of Natalia Menshikova. Well, the Crimean Bakery cafe is also worth mentioning – now there is little to do without it in Sykhiv, especially when it comes to the cultural activity of people from the Crimea and Donbas. And the Domus Theater, in general, is a kind of gentle Crimean sun, which even in winter generously warms the souls of Lviv residents.

The all-Ukrainian competition is dedicated to Lesya Ukrainka, who was born in the Crimea

Six years of occupation: have we lost Crimea? (meeting details)