Mosques of the south-east of Crimea in drawings and lithographs

The south-east of Crimea is unique in terms of the medieval history of the peninsula, but not as popular among visitors as the South Coast. And if you visit Feodosia at least to visit Aivazovsky’s gallery and lie on the sands of the Golden Beach, the Old Crimea is more like an urban settlement. But both the towns and villages around are united by a single historical leitmotif: it was in these places that important events of the Muslim Crimea took place. 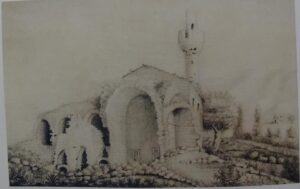 Today, associations with Crimean Tatar culture are geographically connected with Bakhchisarai, ie with the west of the peninsula. While forgetting (or not knowing) about the role of the southeast. If the Old Crimea (Kyrym, Solkhat) in the heyday (XIV century) was compared with Damascus, Theodosia (Kefe) was called nothing more than “Kuchuk-Istanbul”, ie “small Istanbul”, because the city belonged to the Ottoman Empire and before the arrival of Russia. was the second most important in the Black Sea and the first in size on the entire Crimean peninsula. But the change of power led to radical changes: for example, the majority of the Muslim population emigrated from Feodosia, and in the early nineteenth century. the mosque of Sultan Selim Biyuk-Jami was dismantled (ironically, the mosque was built on the site of a Byzantine temple, and in the days of the Russian Empire, in 1870,Alexander Nevsky Church was built here, which was destroyed by the Soviet authorities in literally half a century).

Fortunately, not all monuments were destroyed. This is evidenced by drawings and lithographs of the Feodosian artist of French origin Vikentiy Osipovich Russen. Here you can see mosques, of which only the foundations remain today – Karagozka and the mosque in Kolech-Mosque.

A lithogravure depicting a mosque in the village of Karagoz (after 1948 – the village of Pervomaiske, Kirov district) was created in 1843. On it we can see peasants walking (and someone is going) to the mosque – a rectangular building with a traditional Crimean Tatar tiled roof in the shape of a dome and a minaret. The Karagog Mosque is one of the oldest monuments of the Golden Horde period, a typical example of Ottoman architecture. It was dismantled in Soviet times.

Similar to Karagozka is the mosque in Kolech, which disappeared together with the village. Today Kolech-Mosque is the southern part of the village of Novopokrovka in the Kirov district. The mosque remained in pencil drawings – sketches for lithographs. It is also described as a model of Ottoman architecture that was built during the Golden Horde. Interestingly, it was renovated around 1917, but during the Civil War the monument was destroyed. And in the 1950s, in the process of redevelopment of the village of Pokrovka, the mosque was dismantled.

Of course, Vikentiy Russen did not miss the famous mosque of the Uzbek khan in 1314. In several pencil drawings you can see that this monument was in much worse condition than the previous two. The broken courtyard and the ruined top of the minaret, the ruins of the madrasa – all this is sadly impressive. But the Uzbek mosque was the luckiest: the building and the surrounding area were restored in the twentieth century, and today this amazing architectural monument welcomes tourists. The mosque of the Uzbek khan has a rectangular shape with a gabled tiled roof, which is typical of mosques in Anatolia. But most of all, of course, the mosque is remembered for its unusual entrance: it is a kind of stone niche that frames a wooden carved door.

Today, the Uzbek mosque is the oldest preserved in Crimea, despite everything. Although, of course, these are just remnants: there were more than a thousand mosques in the Crimea.

In the context of the conversation about the paintings and historical monuments of the Crimea, it is impossible not to mention another Feodosian artist – Konstantin Fedorovich Bogaevsky.

Bogaevsky’s watercolors are significantly different from Russen’s drawings, but both artists painted iconic monuments of the history of the Muslim Crimea: the mosques of Karagoz and Koletsk. Bogaevsky’s works were created in the 1920s. The artist described in detail the condition of both monuments, so we can see the changes that have taken place since the time of Russen: the minaret of the Karagog Mosque is without a top, and Koletskaya was destroyed.

It is known that K. Bogaevsky took part in excavations on the territory of the mosque of Khan Uzbek in 1926, as evidenced by watercolors depicting these places.
Medieval Crimea is a mysterious Crimea. We know very little about him, and one of the few sources of information is the fine arts.

Therefore, the Feodosian artists Vikentiy Russen and Konstantin Bogaevsky became real chroniclers of the medieval history of Crimea, who preserved for us a part of the past.