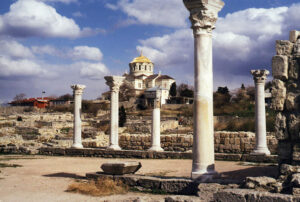 The Dioceses of Simferopol and Crimea (UOC-MP – ed.) Are preparing a second request to Rosmaino for the transfer of 24 objects of the Chersonese-Tavriya Museum-Reserve to the church for free use. But according to Svitlana Melnikova , the museum’s director, the transfer of these objects will threaten the further development of Chersonesos. RIA Novosti reports .

“Formally, the transfer is real. The current legislation provides for such a possibility… By law, there is a period of up to six years after the application of this procedure. It is difficult for the museum. The position of the museum and the Ministry of Culture is that such actions will prevent further development of the museum-reserve , “she said.

Also, the director of the reserve cannot predict the reaction of UNESCO, which protects the monument. “It is difficult to even predict, because at the moment with UNESCO and so quite a difficult relationship,” – said Svetlana Melnikova.

In turn, the rector of the Volodymyr Cathedral, which is located on the territory of “Chersonesos”, Archpriest Serhiy Khalyuta stated that the transfer of the church reserve will in no way harm the status of “Chersonesos” as a UNESCO site.

It will be recalled that the Chersonesos Tavriya National Reserve, which is not only the cultural heritage of Ukraine, but also of the whole world, as it occupies an honorable place in the UNESCO list, in 2015 became federal property.

However, this statement did not have a special impact on Russia, nor did the fact that UNESCO does not recognize the occupation of Crimea, and therefore this object for the world community is still considered Ukrainian. Already on December 7, 2015, Vladimir Putin signed a decree on the inclusion of the museum-reserve in the particularly valuable objects of cultural heritage of the peoples of the Russian Federation.

A new life began in Chersonesos, which must definitely fit into the ideology of the “Russian world”. After all, back in December 2014, Vladimir Putin stated : “Crimea, and Chersonese in particular.” has great sacred and civilizational significance for Russia, as a temple mountain in Jerusalem for Muslims and Jews. ”   Therefore, this idea began to be actively implemented.

The first high-profile scandal was the appointment of Archpriest Serhiy Khalyuta as the head of Chersonesos. The team of researchers did not tolerate such audacity – they rebelled against such an appointment. The result was achieved – the archpriest voluntarily resigned. The next scandal was the replacement of historical tiles on the territory of the reserve with a new one. On May 23, 2016, the Prime Minister of Russia Dmitry Medvedev, while in the Crimea, said that on behalf of the President of Russia in Chersonesos will soon build a spiritual and educational center.