Monuments of Crimea – the current state of national heritage of Ukraine

On May 29, 2019, the Crimean Center for Business and Cultural Cooperation “Ukrainian House” organized and held a round table “Monuments of Crimea – the current state of national heritage of Ukraine” with the support of the Ukrainian Cultural Foundation . 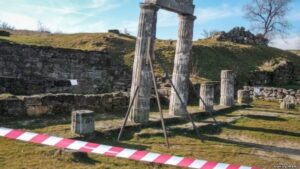 Threats to Ukraine’s cultural heritage in Crimea have emerged since the first days of the Russian Federation’s occupation of the peninsula. In accordance with modern treaty and customary international law and national legislation of Ukraine, all cultural values ​​that have been and continue to be on the territory of the Crimean peninsula temporarily occupied by the Russian Federation remain Ukrainian.

Moreover, this is confirmed by the latest international legal acts, in particular, the UN General Assembly Resolution A / RES / 68/262 of March 27, 2014, adopted immediately after the aggressor country, supported the unity of Ukraine and called on all states and international organizations. and specialized agencies not to recognize any change in the status of the Autonomous Republic of Crimea and the city of Sevastopol and “refrain from any steps that could be construed as recognizing any such changed status.”

In this situation, one of the most important tools to repel aggression is the strict observance by the Ukrainian state of international law, which prohibits the misappropriation of property in the occupied territories, including property of religious, artistic, educational and scientific institutions.

Ukrainian experts Kateryna Busol and Dmytro Koval, who are working on this issue, refer to the basic acts of international law, in particular to Art. 56 of the Hague Code of 1907, which equates these categories of property – even if it belongs to the state – to private property. Thus, the inviolability of such property is emphasized, as private property has long been defined as inviolable during armed conflict. And in accordance with Rule 41 of the Collection of Customary International Humanitarian Law concluded by the International Committee of the Red Cross, the occupying power must prevent the illegal export of cultural property from the occupied territory and must return illegally exported cultural property to the competent authorities of the occupied territory.

Other international acts were based on these provisions, in particular, in the period between the two world wars the Treaty on the Protection of Artistic and Scientific Institutions and Historical Monuments of April 15, 1935 (also known by its initiator as the Roerich Pact or the place of signing) was concluded. – Washington Pact).

Of particular interest now is the Convention for the Protection of Cultural Property in the Event of Armed Conflict, concluded in The Hague in 1954 (hereinafter – the Hague Convention of 1954), which is the result of the development of international law in the period after World War II. say, after Yalta, which gives it a symbolic meaning in the context of recent events in Ukraine.

The 1954 Hague Convention obliges the occupying forces to assist the national authorities in ensuring the protection and preservation of its cultural values ​​(Article 5.1). Thus, Russia, as the occupying power, is obliged not only to refrain from any illegal actions in relation to cultural objects, but also to help the representatives of the state to which they belong (ie Ukraine) to ensure their security. 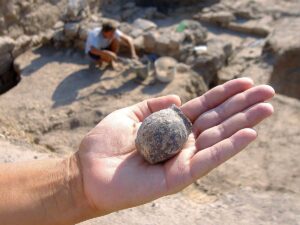 The procedure laid down in Article 18 of the Convention for the application of this act is important:
“1. In addition to provisions which are to enter into force in peacetime, this Convention shall apply in the event of a declared war or any other armed conflict which may arise between two or more Contracting Parties, even if the state of war has not been recognized by one or more of the Parties. them.
2. The Convention shall also apply in all cases of occupation of all or part of the territory of the High Contracting Party, even if that occupation does not meet with any military resistance. ”

The Convention contains a number of provisions governing international and domestic procedures for actions with cultural values, namely: definition of the list (lists) of cultural values, localization of their stay (including topographic), organization of constant monitoring of the situation, recourse to the International Register of Cultural Heritage valuables under special protection (UNESCO), delineation of certain temporary shelters and possible routes of transport, authorization of special personnel, appointment of the Commissioner General for Cultural Property, appeals to the Protecting Powers, etc. The last two provisions should be of the greatest interest to Ukraine, as they allow not only to appeal to UNESCO, but also provide for the right to appeal to one of the countries that is a party to the 1954 Hague Convention.with a request to take on the mission of the so-called “Protecting Power”, whose functions include a wide range of actions in the occupied territories (appointment of the above-mentioned special staff and the Commissioner General, compilation of lists, localization of values, etc.) and mediation.

Referring to these provisions of the Hague Convention, seeking to accelerate the state’s measures to protect cultural heritage from the Russian Federation’s aggression in Crimea, the Ukrainian National Committee of ICOMOS addressed a corresponding appeal dated March 4, 2014 to the Minister of Culture of Ukraine E. Nyschuk.

However, during the first year of the war, no measures were taken, at least in the public sphere, with the publication of official statements, the adoption of acts to implement the provisions of this document or the initiatives of the Ministry of Culture or the government. The second government after the Revolution of Dignity did not take proper care of these issues either – there was an appeal addressed to Deputy Prime Minister and Minister of Culture V. Kyrylenko, which also called for Ukraine’s accession to the Second Protocol to the 1954 Hague Convention.

The National Commission of Ukraine for UNESCO has paid some attention to this issue – the issue was included in the commission’s work plan for 2014. But that’s all. The following 2015, the National Commission, without receiving clear explanations from the Ministry of Culture on the situation with accession to the Second Protocol, again left the issue in the work plan as follows: “To address Ukraine’s accession to the Second Protocol to the Hague Convention for the Protection of Cultural Property in 1954 .

And in 2016, the Ministry of Culture made a statement about the cultural heritage in Crimea only under the third government after the Maidan, in the third year of the war. 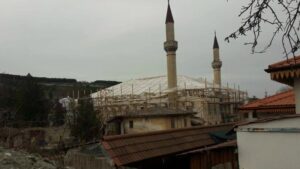 In the National Commission for UNESCO, the issue was postponed to the work plan for 2016 and to the plan for 2017. The shift in the position of the National Commission of Ukraine for UNESCO took place after a special thematic meeting on cultural heritage protection in Crimea on January 19, 2018. The decision was made to “start consultations on enhanced protection of monuments in the Crimea in accordance with the Hague Convention for the Protection of Cultural Property in the Event of Armed Conflict of 1954.” and “to hold public hearings and expert consultations on the application of the mechanisms and procedures of the 1954 Hague Convention”. The responsible executor is the Ministry of Culture, the deadline is “during 2018.”

And on May 14, 2019, in the sixth year of the war, the Verkhovna Rada of Ukraine adopted Resolution № 2716-VIII “On Recommendations of Parliamentary Hearings on” The state, problems and prospects of cultural heritage protection in Ukraine “with paragraph, in particular,” 1. To the President of Ukraine to submit to the Verkhovna Rada of Ukraine a draft Law of Ukraine on the Accession of Ukraine to the Second Protocol to the Convention for the Protection of Cultural Property in the Event of Armed Conflict, signed in The Hague on May 14, 1954. ”

The fact of the delay is surprising, because the parliamentary hearings took place a year before this resolution – on April 18, 2018. And at the parliamentary hearings, the proposal to join the Second Protocol to the Hague Convention was made at the beginning of this meeting in a speech by the Minister of Culture of Ukraine E. Nyschuk. What prevented the minister from fulfilling his powers without waiting for the parliamentary hearings? The question is rhetorical, because the only answer to this may be a lack of will, a lack of responsibility for the area assigned by the government. Because according to the regulations on the Ministry of Culture, this department “is the main body in the system of central executive bodies that ensures the formation and implementation of state policy in the fields of culture and arts, protection of cultural heritage…”.

Thus, the Minister of Culture E. Nyshchuk did not have to wait for the parliamentary hearings in 2018 to warn the public about the disappointing state of affairs in the area entrusted to him, but should initiate legislation on Ukraine’s accession to the Second Protocol to the Hague Convention for the Protection of Cultural Heritage. values ​​in the event of an armed conflict, signed in The Hague on May 14, 1954.

What would such an accession give? First, it should be borne in mind that since 1954 there have been changes, in particular, the improvement of international law. Therefore, after a series of significant losses of cultural values ​​to humanity in the late twentieth century, the international community supplemented the 1954 Hague Convention with new provisions that formed the so-called Second Protocol to it. These are new elements of protection of cultural values, such as:
1. Personal criminal responsibility and punishment of violations of this Protocol – intentional and deliberate damage to cultural values ​​is treated as a war crime.
2. The notion of “military necessity” and other wording used in the text of the Convention has been clarified.
3. A new type of “enhanced protection” has been introduced, which is very important for Ukraine.
4. The institutional body of the Convention, the Committee for the Protection of Cultural Property, has been appointed and the list of measures related to the protection of cultural property carried out in peacetime, the so-called preparatory measures in peacetime, has been expanded. number of non-governmental organizations.
Needless to say, in the case of the Khan’s Palace in Bakhchisarai, the Ministry of Culture could have acted in advance to prevent glaring acts of vandalism that occurred as a result of the so-called restoration initiated by the occupation administration.

Of course, there will be a punishment for the aggressor someday. But the high international tribunal, which in the future will consider the case of illegal actions on the cultural heritage of Ukraine as a result of the occupation of the Autonomous Republic of Crimea and the city of Sevastopol by the Russian Federation, will raise the unequivocal issue of responsibility for inaction of state institutions and officials. persons of the Ukrainian state.

Honorary President of the Ukrainian National Committee ICOMOS, Expert on Cultural Heritage of Ukraine
Share this