Literary map of Crimea on the pages of “Poetic Atlas” (top) 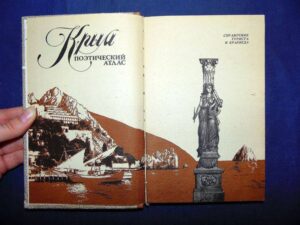 What associations do we have when we mention Crimea? Even if you’ve never been to the peninsula, your brain will definitely give something away. This is not surprising, because certain ideas were formed through art: cinema, painting, photography and, of course, literature.

Crimea appeared in many literary works. The most famous of them belong to the pen of writers who came from around the world. Therefore, sometimes it seems that Crimea served as something like one big residence for writers. Mostly Russian. And in this residence they wrote works in which the action took place as if against the background of the Crimea. All around – bright scenery, which helps to reveal the historical events of the Russian Empire and then the Soviet Union. Or successfully forget the events before 1783.

In order not to be unfounded, I offer to illustrate “Poetic Atlas of Crimea”, published by the Simferopol publishing house “Tavria” in 1989. The compilers of the publication called it “a guide for tourists and local historians.” The concept of the atlas is as follows: the book contains poems by Russian poets (with the exception of Adam Mickiewicz), dedicated to either historically important places or beautiful landscapes, which are generous to the Crimean peninsula.

The content of the book is more like a patchwork quilt: here Adzhimushkai – a monument to World War II, and then on the list – Ai-Petri and Artek. Thus, the compilers tried to emphasize the layers of different historical periods and cultures. At the same time, “Poetic Atlas” is a stereotype in the cover with the dominance of only one culture. Stereotypes that were specially selected in order for Crimea to “return to its native harbor” in 2014.

Along with the poems, the compilers placed small notes “in the fields.” And the first note refers us to n literature: “Crimea is known in n literature since the emergence of its most ancient monuments.” 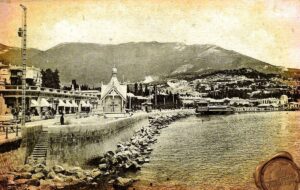 That is, there will be no alternative, and the famous Crimean multiculturalism is crossed out in the first sentence. And then there is the reference to history: “… Once an attractive land, it becomes a source of constant danger for Russia, it turns into a place where captive captives have disappeared forever. The growing Russian state enters into a struggle with the Crimean Khanate, a former vassal of Turkey at the time. The struggle for access to the sea, for the cessation of devastating raids. ”

As we can see, the compilers romanticize the same “Russian state” that later “saved” Crimea. And then the idyll begins: “Russia is staring at the newly acquired land, learning to see in it no longer a battlefield, but a” true treasure “belonging to it, belonging to it.”

Here it is important to emphasize the absurd phrase “newly acquired land”: when Crimea was Russian until 1783 ???
After all, we are interested not only in historical injustice, but also in the image of Crimea in Russian literature. What is he like?

We find a partial answer on the same page in the notes: “It is not surprising that the romantic land, the exotic” Russian Italy “attracted not only rulers and scholars, but also poets.”

That is, Crimea is an exotic land inhabited by other, less valuable peoples. And it is this land that is now Russian, and it is about this land that the people of the Russian Empire will write.

So I invite all of you for a tour of the literary places of the Crimea. 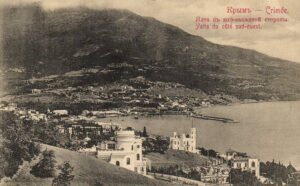 The southern coast has always been the most popular among visitors, and it was here that the imperial and then the Soviet elite built palaces and rested in estates and dachas.

Let’s stop in Yalta, from which this resort boom began. In the atlas about this small town we read the following:
“When Crimea was annexed to the Russian Empire in 1783, Yalta was a tiny village… Yalta received the status of a city in 1838, but its rapid flowering began after 1860. It was then on the advice of the famous Russian scientist SP Botkin, the royal family acquires the estate of Livadia near Yalta… Today, the former “Russian Nice”, “Russian Riviera” – is a beautiful resort town, healing and “healing” millions of workers. ”

That is, the main reason why Yalta became a resort town, is the fact of rest here of the royal family. And what in the poems?

DD Minaev wrote: “This climate is miraculous, / like a healing balm.” And then the author says that the air of Yalta will cure any patient and even raise the dead. And for example, tells the story of a traveler from Poltava, with whom he had to sail to the Crimea. Then they go down to the ground and go in different directions. Ten days after a vacation in Yalta, the author accidentally meets his friend and describes this meeting as follows: “Became almost unrecognizable / my ferocious Little Russian. / Admired the southern edge, / Satisfied with everything, like Pangloss.

Yalta seems to have only one meaning: a large rookery, which is visited only to breathe the air and start a holiday romance. On the map of Crimea, and not only literary, the importance of Yalta is exaggerated. Apparently, this is due to the fact that the authors of poems about the southern cities usually came here en masse and only for recreation, and therefore wrote about what they saw on the surface – without delving into the essence of things.

In the atlas the south-east of Crimea is mentioned in the context of Feodosia, Old Crimea and Koktebel (in Soviet language “Planerskoe”). Karadag is also mentioned next to Koktebel. 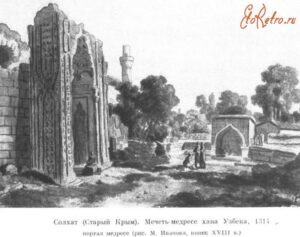 It should be noted that Feodosia, the Old Crimea and Koktebel are of special importance for Russian literature. In Feodosia there is a house-museum of Alexander Green, in the Old Crimea – a museum, a grave and a memorial. And Koktebel became famous only because Maximilian Voloshin built his “poet’s house” there: “It is difficult to list all those who visited the hospitable walls of the Poet’s House: KA Trenev, VV Veresaev, AS Green , IG Ehrenburg, M. Gorky, V. Ya. Bryusov, Tsvetaeva sisters, OE Mandelstam, AN Tolstoy, MM Prishvin… ».

It is believed that M. Voloshin glorified the Russian Crimea. However, in reality everything is exactly the opposite. Voloshin was one of the few to raise the issue of Russia’s responsibility to Crimea. In the poem “The Poet’s House” we find not only the glorification of nature, but also the understanding of the peninsula as a layering of epochs, cultures, peoples: .. / Here, in these folds of the sea and the earth, / The mold of human cultures did not dry up – The space of centuries was narrow for life, / While we – Russia – did not come ».

Maximilian Voloshin mentions the Crimea of ​​the pre-Russian period and the Crimea after 1783: “For one and a half hundred years – from Catherine – / We trampled the Muslim paradise”.

After such lines it is appropriate to mention the Old Crimea. In the atlas we find only a small mention of the fact that in the Middle Ages the city was called Solhat and was a major center of trade. However, the authors have shifted the emphasis, and the chapter begins with a poem by Rozhdestvensky dedicated to O. Green. The Muslim past of the city is mentioned involuntarily in the poem by Yu. Drunina “Old Crimea”, where there are the following lines: “Chickens, cherries, Slavic faces, / Modesty of white Ukrainian houses. / Where are you, khans of arrogant capital – / Inaccessible and magnificent Solkhat? ”

We have oppositions: the Soviet Old Crimea and the medieval Solkhat. Drunina emphasizes that once it was a majestic city, and now “Old Crimea looks like a village.” Although why be surprised here, if after 1783 the process of destruction of the Muslim part of the Crimea began? Thus, when the capital of the Khanate was moved to Bakhchisarai, the importance of the Old Crimea decreased, but did not disappear. And already in Soviet times, the Old Crimea became the place where O. Green lived to create new associations.

But it’s not just history that has played a nasty joke on the city. For a long time, the Old Crimea was a resort. There are four types of air: mountain, forest, sea and steppe. This unique air mix helped people with upper respiratory diseases to recover. However, when Yalta became more popular, doctors began to send patients en masse to the south, so the Old Crimea was completely empty.