Literary map of Crimea on the pages of “Poetic Atlas” (continued)

Kerch and the Kerch Peninsula 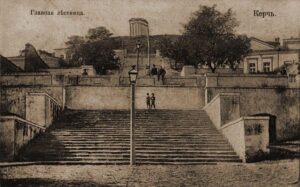 Kerch is the oldest city in Crimea, the “eternal city”, because the first settlements appeared here in the sixth century BC, founded by colonizers from Miletus.

It is well known that the Kerch Peninsula was attractive to ancient Greek sailors precisely because of the convenience of location, as well as wheat, which they exchanged for wine and ceramics. Another famous people – the Scythians, who from time to time fought with the Greeks, buried their kings in mounds, along with them sending on a journey to the Kingdom of the Dead an incredible amount of gold, horses, warriors and concubines.

Despite centuries of history, writers have bypassed Kerch and the Kerch Peninsula. Apparently, this fashion was set by Alexander Pushkin, who did not find the tomb of Mithridates of Yevpator and did not remember anything but fishing boats and the ubiquitous smell of fish. We also know almost nothing about writers from Kerch, except for Ivan Lypa (a small lane from Mitridatska Street is even named after him) and Georgy Shengeli. Both spent their childhood in the city.

Regarding thematic layers – Kerch in the XIX century. was the center of archaeological excavations, here gathered prominent scientists of the time. But in literary works about Kerch the main leitmotif is the Second World War.

This happened after the publication of the famous book of memoirs of Leonid Brezhnev “Small Land”, which mentions Kerch and the fact of the presence of the Secretary General in the Kerch steppes. This led to the city being awarded the title of “hero” and the creation of a new discourse that pushed to the background the ancient layer of culture.

In the “atlas” specifically two pages are devoted to the city: these are the poems of the same name by Nikolai Ushakov and Vsevolod Rozhdestvensky, as well as a poem by Maximilian Voloshin from the series “Cimmerian Spring” number 10. In the notes we find the following statements: ” Hero city Kerch Crimea. Kerch under the name Pantikapaion (Pantikapaion) was the capital of the Bosporus Kingdom. In 1774 Kerch together with the fortress of Enikale went to Russia, becoming the first base of the Russian fleet on the Black Sea. Now Kerch is a major metallurgical and shipbuilding center of the country . “ 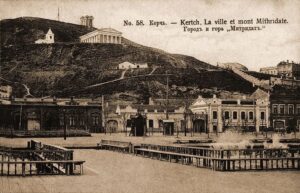 So, on two pages dedicated to Kerch, we get a little acquainted with the sea air, shipbuilding and the atmosphere of a fishing town. For example: ” Sucking tornadoes are already roaming / Between the sky and torn water, / The low huts of Kerch / Sparkled with green mica ” (Vs. Rozhdestvensky), ” And the streets of the highway breathe with perseverance, / talk about peace and work “(M. Ushakov),” Seagulls dived into the sea surface, / Clouds swirled. I watched / As the sun rushes into the swell of steel / Diamond streams of arrows “(M. Voloshin).

As was once the case with the Old Crimea, Kerch also lost its flair of majesty, becoming an industrial city without outstanding features. At least it seems so after reading the section. But let’s look at other sections. Maybe we will find something more specific there.

In addition to “Kerch”, in the “atlas” we find four more sections on Kerch and the Kerch Peninsula: “Ajimushkai”, “Ak-Monai”, “Mithridates”, “Eltigen”. All these places are connected with the Second World War, and even Mount Mithridates, on which the Acropolis of Pantikapaion was originally located, is considered only in the context of the events of 1943. An excellent illustration of how the accents changed can be found in the Mithridates section. These are the poems of the above-mentioned Julia Drunina: ” On the mountain of Mithridates / They composed legends and ode – / Tombs, temples, palaces, / Round dances of lords… / I absently listen to the guide, / And in my ears / Growing furious cry .” 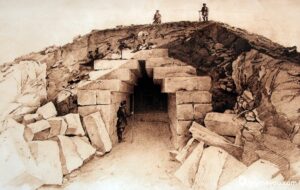 That is, the lyrical heroine says that the events of World War II (specifically the Eltigen landing) are much more important to her than antiquity, which can be explained by Soviet psychology. The king is automatically a pagan.

Another cult place for Soviet literature is, of course, Adzhimushkai and its stoneworks. It was here that guerrilla units defended themselves for 170 days during World War II. For many years there has been a museum here, where people from Kerch are taken on excursions, starting from the school bench.
Eltigen (after 1945 – Heroivka) is a small village, well-known for the events of November 1943, when a landing party landed on the territory occupied by the enemy and captured the bridgehead, later called the “Land of Fire”.

We can say that the trinity “Adzhimushkai – Mithridates – Eltigen” is the basis for the formation of a certain canon for poetry about Kerch and the Kerch Peninsula. And no mention of antiquity, Scythian mounds, salt lakes, steppes, etc. Instead, we have a whole “poem” by the Soviet poet Konstantin Simonov “Rains”, which he wrote during his stay on the Ak-Monai Isthmus as a correspondent for the “Red Star”. While we recognize that, except for one line mentioning names, there is no indication of belonging to the Crimea: ” Over Akmonajsky ravnynoy / Shell Winter rain, and it is strong, It would all wet, Even spynы / nesshyh sadly our horses». The poem is written in the form of a letter, the lyrical hero wants to be not here and now, but next to his beloved, and the Kerch Peninsula serves as a background on which events unfold and emotions and feelings are reflected. This is one of the main features of colonial literature: it serves certain places only as scenery, without delving into the essence of the “landscape”. 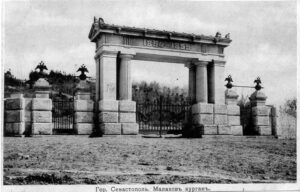 Another hero city is Sevastopol. At the same time, this city is significant for Russian literature twice: Sevastopol was the epicenter of events and the Crimean and World War II. Although it all started in antiquity: at the end of the V century. B.C. the ancient Greek colonizers from Heraclea Pontica came here and founded a polis called Chersonese. For two millennia, Chersonesos was a major political, economic and cultural center, retaining its greatness until the end of the XIV century.

The year 1783 brought significant changes: a port and a settlement were built, and on February 10, 1784, the city was named “Sevastopol”, which translates from Greek as “majestic city”. However, this greatness will have a completely different meaning, which is perfectly reflected in the imperial and Soviet literature, painting, song lyrics. Sevastopol is the main argument for the Russianness of Crimea, a legend created in a short time that continues to function in favor of one state for many years in a row.

In the “atlas” section “Sevastopol” has six pages, which glorifies the feat of the soldiers of the Crimean War, and then, of course, the “Patriotic War”. I will give the most characteristic examples: “ The war has struck, / Russia is called to contemplate the world, / To the court of History: may the proud spirit and valor live in us, / That we are not bound by narrow false wisdom! / What I can proudly say to everyone: I am Russian! “(A. Maikov),” Hear the heart – soon the rocks will tremble / From the steel cry of the batteries. / We will still hear, Admirals, / In the bays the roar of Russian anchors… »(O. Surkov),« Battleships, like mountains of forged steel, / Immobile, inaudible on the crests of the wave; / They stood up in strict silhouettes, / Midnight guards of the Soviet country “(V. Lugovskaya).

In addition to the main section, there are separate sections about Sevastopol in the book, which are devoted to the significant events of the two wars. For example, Malakhov mound. This is a height in the eastern part of Sevastopol, named after Captain Malakhov, whose house stood at the foot of the hill. Malakhov mound was a key point of defense of the city during the wars. In the poems we again find the praise of the empire: ” I was killed like Admiral Nakhimov, / I was torn to pieces a hundred times / And was buried in countless graves, / Like thousands of sailors and soldiers. / But like immortal Russia itself, / Becoming stronger these days than Goliath, / I, clenching my teeth and overcoming my torments, / Resurrected from the grave, death corrected death “(R. Ivnev),” Apparently, much, apparently, too much, above the edge, / here the native homeland ate bread. / Climbed – gangs, teams, regiments… / Malakhov’s style, bristling with bayonets»(R. Kazakova). 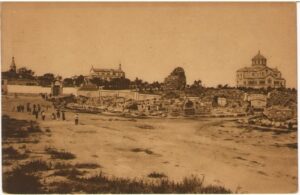 In the “atlas” Sevastopol, of course, is associated with a heroic past. But there are also sections that refer us to the history of Chersonesos (by the way, Pantikapaion as a separate section in the book). And here we can observe completely different visions. For example, Mykola Minsky describes Chersonese as follows: “ I have never seen a ruin sadder. Excavated houses gape like graves . ” Probably, the poet was struck by the past greatness of Chersonesos, which saw different eras and different people. The poem tells us about a certain mystical experience of a man who touched eternity. A similar mood of the poem by Yefim Zaitsevsky, which comprehends the decay of existence and its ephemerality: ” I come to you and in vain would seek / Here is a hail of glorious and believe the legends: ».

Excerpt from the poem “By the Sea” by Anna Akhmatova – is from the personal, where different layers of history are intertwined, as well as air, sea and fishing boats: ” When I become queen, / I will build six battleships / And six gunboats, / To my bays guarded / Until Fiolent himself “,” I was friends with fishermen. / Under an overturned boat often / During the downpour I sat with them, / I listened to the sea, I remembered, / I secretly believed every word ». This poem is one of the best in the “atlas”, because it very accurately conveys the atmosphere of Chersonesos, its ruins and the hot sun.

As we can see, the poems about Sevastopol have a panegyric character, ie their main purpose is to praise the heroic past in the contexts of the Crimean and Second World Wars. Chersonese is conceived by poets in the categories of eternity, fluidity, tragedy of history. However, Sevastopol and everything within it is associated with legend and greatness after 1783.

“Poetic Atlas of Crimea” – a publication that shows the reader / tourist / local historian only one facet of the peninsula, which in most cases ignores history and other cultures. Instead, the events after 1783 are covered as much as possible.

Unfortunately, this vision of Crimea still exists. Therefore, the main problem is the formation of other literature that can rethink the multicultural Crimea, as well as historical events of modern times. The main question is, how long does it take to heal wounds and create new meanings? ..