Liquidation of the Crimean Khanate

In the middle of the XVIII century. The Russian Empire came close to the Black Sea coast. During the Russo-Turkish War of 1768-1774, the Crimean Khanate was declared an independent state from the Ottoman Empire. Russia was given the opportunity to directly influence the events that took place on its territory. 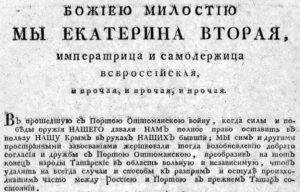 Dissatisfaction of European states with the growing influence of Russia in the Black Sea and Crimea did not allow Catherine II to operate freely in this region. Realizing this, the Russian government initially did not set the task of joining the Crimean Khanate. He needed only control over the Crimea and the northern Black Sea coast. The declaration of independence of the Crimean Khanate allowed the Russian government, without attracting attention from Europe, to expand its sphere of influence.

In the Crimea there was a struggle of various groups. The constant change of khans did not allow to create a strong state power. Both Crimean Tatars and tribes of nomadic Yedisan, Yedichkul, Budzhak and Dzhambuilut Tatars lived on the territory of the Khanate. In the literature they are mostly united under the general name “Nogai Tatars”. They made up about 40% of the population of the Khanate and roamed both on the territory of the Crimean peninsula and beyond.

There is a document with a long title, which illustrates the situation at that time in the Crimean Khanate: ” An explanation of the state and inclinations of the Crimean, Budzhak and Nogai Tatars, they may be tempted by the Porte . ” The document was compiled by P. Veselitsky, an adviser to the Board of Foreign Affairs, for the commander of the Second Russian Army, P. Panin, in 1769, which described in detail the occupations and nomadic places of each Tatar horde, as well as the relations between different ethnic Tatar branches. About the Crimean Tatars Veselitsky wrote: “Crimean Tatars are known to be a settled people who, due to the location of their peninsula and the fertility of the land, are mostly engaged in construction, trade, cattle breeding and farming . Describing the differences between the Tatar hordes, Veselitsky noted that the strongest hordes, the Edisan and Budzha hordes, would be easier to persuade to secede from the Ottoman Empire and join Russia. 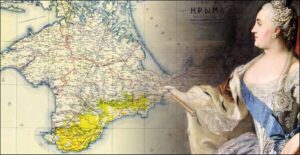 Diplomat Bakunin took an even more outspoken position. His opinion on the future of the Crimean Khanate was expressed in a note “Reflections of a Russian patriot on the former affairs of the Tatars in the wars and means of ending them forever,” which he submitted to Catherine II. Having quarreled with the Tatars, he wrote, it would be easier to seize Crimea and then settle it with Ukrainians, and to settle Russians from the central provinces of Russia in the well-inhabited places of the latter. As for the Crimean Tatars, this diplomat offered a frankly cynical perspective of their future fate: “Tatars are out of the Crimea.”

During extended Russian-Turkish war, namely October 16, 1769, Catherine II sent a rescript P. Panin as follows: ” We think whether you can not in the circumstances and all the Crimea Tatars shaken in their allegiance to moving them Ottoman Porte thoughts of gaining independence from any government and promising them real help from us . ” The Empress gave Panina a full opportunity to act independently, based on the circumstances.

The authors of pre biography Panin told: ” Skillfully negotiating with the Tatars, time scaring them time uleschuyuchy their own, eliminating also very skillfully misunderstanding between them and the Cossacks, skillfully bowing Tatars to making intercession of … and achieving thus weakening their sometimes a very dangerous force, Panin eventually managed to inspire confidence in them. Having thus achieved the pacification of the majority of the hordes, he at the same time facilitated further communication and even the conquest of the Crimea . ” The first to succumb were the Edisan and Budzha hordes, who entered into an alliance with Russia and renounced Ottoman rule. They were followed by Yedichkul and Jambuilut Tatars. The future of Crimea became predictable.

On December 14, 1782, Catherine II sent G. Potemkin a rescript containing instructions on his next steps. The pretext under which the government intended to annex Crimea, in the interpretation of the Empress was as follows: “The transformation of Crimea into a free and independent region did not bring peace to Russia and turned only into new worries for it with significant costs. The experience of the time since 1774 has shown that independence is not inherent in the Tatar peoples and to protect it, we must always be armed and in peacetime to defeat the troops with heavy movements, making large expenditures, as during the war… Taking into account all these circumstances, we decided to give another set of Crimean affairs… and to make the Crimean peninsula not a nest of robbers and rebels for the future, but the territory of the Russian state. Therefore, we fully understand our will to appropriate the Crimean peninsula and its accession to Russia . ”

We need to dwell on another issue. The policy pursued by the Russian Empire in this region was aimed at gaining control of the straits: to reach the Bosphorus and the Dardanelles as an exit to the Mediterranean Sea. In part, this goal was achieved by annexing to Russia the northern and northeastern shores of the Black Sea – the Crimean Khanate and the Kingdom of Georgia. But the ultimate goal set by the rulers of the empire was larger: the expulsion of Turkey from Europe and the conquest of neighboring lands with Russia. The capture of Crimea was only the beginning of this purposeful policy.

On April 19, 1883, Russia, in violation of the terms of the Kyuchuk-Kaynardzhiy Treaty, declared the inclusion of Crimea into the Russian Empire. For almost a year, the peninsula was governed by military authorities through a Muslim council created for this purpose. On February 2, 1784, an order was issued creating the Tavriya region, which included the Crimean peninsula, Taman, and lands north of Perekop up to the Ekaterinoslav governorate. Grigory Potemkin became the first governor of the Tavriya region.