It was under this name that an exhibition showing a private collection of Crimean coins and artifacts was opened on December 13 at the Crimean House with the informational support of the Crimean Room and Culture and Life newspapers. 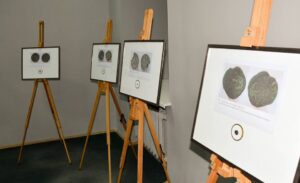 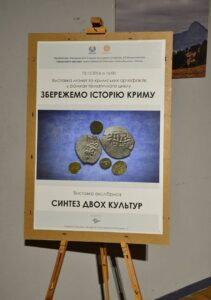 The exposition is an appeal to all concerned about the need to preserve the historical and cultural heritage of Crimea. Another goal of this exhibition is to raise the issue of “spiritual ecology”, according to which consumer instincts should be pushed to the background, and instead awaken the national consciousness, which will help to understand the history of Crimea as an organic component of Ukraine.

The exhibition presents coins from the time of the Golden Horde, the Crimean Khanate, the Ottoman Empire, the Grand Duchy of Lithuania. These coins are a clear confirmation of the synthesis of several cultures – primarily Greek, Crimean Tatar, Ukrainian, Lithuanian, Polish and Moldavian.

The oldest exhibit of the exhibition is a copper coin from Chersonesos. This city played a significant role in the history of Russia-Ukraine. The coin dates back to 330-310 BC. Its age is 2300 years. The coin depicts a bow and arrow. It is believed that this image became the prototype of the Ukrainian trident.

“A great scientific work was done by one of the employees of the Vyshhorod Historical and Cultural Reserve – Vadym Pereguda, who in his free time paid a lot of attention to the collection of this collection. The history of Crimean Tatar ties in any sphere – whether in politics, culture or trade – has deep roots. In the public consciousness, it was as if Ukrainians had always been at war with the Crimean Tatars. But in reality this is far from the case. There were long periods of peace and close relations with the Crimean Khanate, both in trade and in the military and political spheres. One of the largest joint operations was the Battle of Konotop. The exhibition “Let’s Preserve the History of Crimea” embodies the whole huge, one might say, millennial history of Crimean-Ukrainian relations“, said the doctor of historical sciences.Taras Chukhlib, Deputy Director for Research at the Vyshhorod Historical and Cultural Reserve. 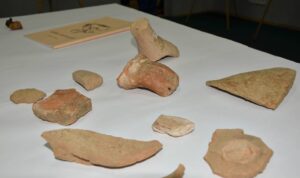 In addition, in the context of the exhibition for the first time in Ukraine was presented an exposition of bookplates “Synthesis of Two Cultures”, which tells about the Tatar roots of Polish writer Henryk Sienkiewicz and points to the unifying basis of Ukrainian, Crimean Tatar, Polish and Lithuanian. This is a kind of synthesis of cultures at the crossroads of history. By the way, this year marks 170 years since the birth and 100 years since the death of Henryk Sienkiewicz.

After the exhibition, a private collection of coins and artifacts from the Crimea will be transferred for permanent storage to the specially created on the basis of the Vyshgorod Historical and Cultural Reserve Fund “Crimean Antiquities”.

Vlada Litovchenko, the ideological inspirer of the exhibition and the director of the Vyshhorod Historical and Cultural Reserve, stressed that such events are extremely necessary today, as they teach young people the best examples of culture, archeology and history.