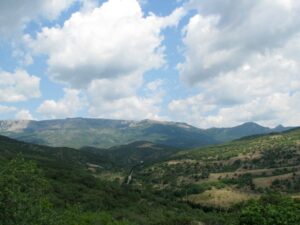 The Crimean seaside highway winds like a twisted mountain river through the entire resort and vineyard of the south-eastern Crimea. Buses and cars overcome the serpentines of the highway for a long time, then dragging themselves to the height of the passes, then on the brakes sliding into the small valleys of tiny rivers that carry into the Black Sea clean water from mountain springs. In winter the roads are almost empty, the summer season fills them with lines of sightseeing buses. 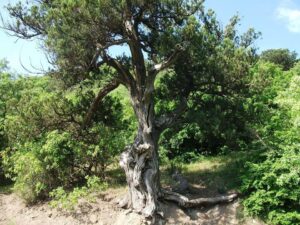 Crimea along this route is so rich in history and landscapes that all the way there is something to listen to and admire. Voloshin’s Koktebel and Otuzi, of incredible beauty Kara-Dag, will flash in the windows. In a matter of seconds, the fantastic country of Megan will admire itself from the pass over the valley of the Goats. Then Sudak with its glorious fortress, and behind it – the New World with patterned capes of the medieval Paradise, after Kapsihor will remind of the Genoese antiquity of the ruins of the castle of the brothers Guasco, and there is the village of Scuti, modern Uskut. 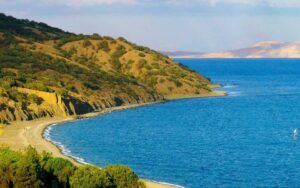 And finally, Kanaka. Exactly halfway between Sudak and Alushta, a long narrow valley of a mountain river, which is no more. And it was! Old people say that at its mouth was a port, ships from the sea entered the river, but when it was, under which kings and heroes, do not say. By the way, this river is mentioned by Maxim Gorky. In one of his Crimean travels, getting from one labor gang to another, he had to wait for a good two days in early September, until the stormy after the downpours of Kanak came ashore. And here is what the researcher Peter Simon Pallas wrote about these places a hundred years before: falling into the sea. The Tatars call this stream “Kanaka”. Now this river can be seen only after a good downpour in the mountains. 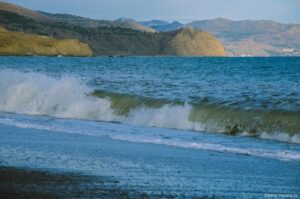 But the real wealth of the Kanak beam is a relict grove of tall juniper and pistachio. These plants survived the ice age and survived in some places on the South Bank in Foros, at the Nikita Botanical Garden at Cape Martian, in Kanak, in the New World.
As for the name “Kanak”, in this part of the Crimea the names are generally beautiful, unusual: Karabi, Arpat, Kapsihor, Tuak and so on. Often have a controversial translation, the historical intertwining of languages ​​in the Crimea allows to put forward different versions.

There is an assumption that “Kanaka” – from “konak”, which in Turkic languages ​​means “overnight”. This interpretation was put forward by Simferopol local historian Ihor Belyansky. There is a more consonant version, although its compliance still needs to be proven: “khanaka”, ie “worship”.
And there is a Greek, mythical version, according to which Kanaka – the name of the daughter of the god of winds Aeolus, the wife of Poseidon, the ruler of all seas, and the Black, which embraces this strange peninsula for thousands of years.