Ivan Piddubny: how the memory of the “Russian hero” tortured for “Ukrainian nationalism” is honored in Crimea 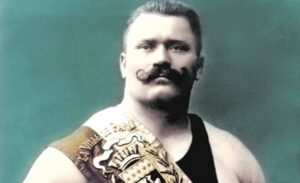 On the occasion of the 145th anniversary of the birth of the Ukrainian wrestler, six-time world champion in classical wrestling Ivan Piddubny, a book by the Crimean writer Yevhen Belousov “Invincible. Ivan Piddubny “ (” Invincible. Ivan Poddubny “). Its presentation, which began in July and is due to end in November this year, is planned in the cities of Crimea – Feodosia, Simferopol, Kerch, Evpatoria, Sevastopol, as well as in Yeisk, Krasnodar Territory, where the Ukrainian hero lived in recent years, and in other cities.

In his work, the author invariably gives the name of Ivan Piddubny with the adjective “Russian”. In his review of the Moscow literary monthly “Day of literature” draws attention to the following sentence, the absurdity of which is seen with the naked eye, “Ukrainian native of a poor family, the usual stevedore for the whole world became a symbol of power, strength and indestructibility of the Russian character” . The athlete, who, as experts rightly point out, has not lost a single match in his life, “defended the honor of Russia in the international arena.” At the same time, in response to the biographical study, he is characterized as “a Russian hero, teacher and true patriot of the Fatherland” (of course).

In addition to Russian sources (materials of the Yeisk Memorial Museum of IM Piddubny), the book, on which the author worked for three years, uses material from Ukrainian cultural institutions – the Museum named after IM Piddubny in Krasenivka in Cherkasy region, where the famous athlete was born, as well as the Museum of Antiquities and the Maritime Library. Admiral MP Lazarev in the occupied Sevastopol and Feodosia. In particular, the head of the museum in Krasenivka Nadiya Krivonos gave a positive response to the book published in Crimea after its annexation, thanking the author for the successful use of all the photos and documents sent to him by employees of the Krasenivka Museum and Cherkasy Regional Museum of Local Lore. 2013.

The literary editor of the book was Doctor of Philology, Professor Oksana Reznik from the Crimea. In her review, she singled out the “patriotic” words attributed to Ivan Piddubny: “I was supported and warmed by my love for Russia, my desire to defend the honor and dignity of Russian sports, and my sense of national pride .”  The Crimean scientist also emphasizes the “relevant” statement of the Russian wrestler Alexander Karelin: “As long as the Russians dominate the tournaments on a planetary scale, the era of Piddubny continues . “

The tradition of “sculpting a Russian” from a world-famous Ukrainian has been around for decades. For example, in 2014, the Russian film “Ivan Piddubny” was released in Russia, which was not recommended in Ukraine as showing contempt for the Ukrainian language, statehood and people and contains facts distorted and rewritten in favor of Russia. In Piddubny’s film, definitions such as “Russian bear”, “living embodiment of the strength of the Russian people”, “Russian nature itself” are constantly presented. A Cossack up to the seventh generation, who always and everywhere spoke Ukrainian and wore an embroidered shirt both on holidays and on weekdays, appears on the screen in a hybrid of embroidered shirts and kosovorotki, surrounded by “Ukrainian” peasants wearing kosovorotki without embroidery, cartouches and vests. of unknown territorial origin; at the same time his father is generally dressed in a Circassian with Gazers.The main character, Mikhail Porechenkov (the same man who fired a large-caliber machine gun at Ukrainian military positions near the Donetsk airport in the fall of 2014, wearing a protective helmet with the words “Press”), said that Ivan Piddubny embodied “the strength and power of the Russian Empire.” However, in an interview with Izvestia, he said:“The system tried to hang a label, to subdue Piddubny, but he resisted. The Germans, he said that there is a Russian and a passport when he tried to change nationality, he slammed his fist on the table: “I’m Ukrainian! ‘” . 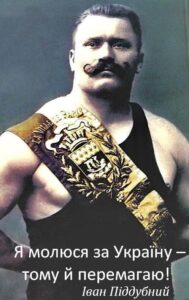 The Russian artist wanted by the Security Service of Ukraine did not specify who in 1937 issued a passport to the “champion of champions” with the surname “Poddubny” and the nationality “Russian”, in which he personally made corrections – “Piddubny” and “Ukrainian”, before this has long bored the police. According to Oleksandr Rudyachenko, repeatedly in an interview with the foreign press when asked who was his greatest love, Piddubny always answered: “Ukraine, of course, but who else?”, And entering the arena, “prayed for Ukraine, that’s why he won. ” All his life, the outstanding son of Ukraine, wherever he was, carried in his heart a love for the Motherland, constantly emphasizing who he was and where he came from. Researcher Vadym Dzhuvaha wrote that when Ivan Piddubny left his native village, his father instructed him:“Remember that you are descended from the father-mother of a Cossack, Zaporozhian, and that the honor of a Cossack is more precious than a mother, more precious than a native father. Remember, Ivan, sell your honor – you are not my son, and I am not your father . “ He did not sell the honor, and did not betray his family, even finding himself in the NKVD torture chamber on charges of “Ukrainian nationalism”, removing from there after two weeks the scars on his back that remained for life, and since then always performing in a leotard. “It was Engels who taught me ‘Leninism’ for the language and for the passport ,” said the wrestler, who not only could not pronounce the word “Leninism” but could barely write. Before that, he waited his turn in the cold water for a whole week in the Chekist prisons in Odessa.

Why with special persistence from Ivan Piddubny do “Russian” in the Crimea? Because that’s where he went as a young man on the advice of an experienced fellow villager to earn money, not knowing what awaits him there. In Sevastopol, he began working as a rigger in the Greek company “Livas”, for sixteen hours a day to win loads hauling loads on ladders, in his spare time on the advice of friends doing weightlifting. In 1895, the young man, along with other employees, moved to Feodosia, where he met the pioneers of weightlifting, students of seafaring classes Anton Preobrazhensky and Vasily Vasiliev. On their advice, in 1896 (it was then that the First Olympics took place in Athens), he first tried his hand at the wrestling championship, which organized the circus of Bezkorovainy in Feodosia. He lost the first professional duel in his life – but this loss was his last:for 40 years of his career no one could overcome it. It was in the Crimea that Piddubny made a conclusion for himself, passing these words to his successors:“It’s not enough to swing a bull by nature, you need to be able to organize your strength, directing it in the right direction . “

It should be noted that the “Russian peace” in the Crimea was not very happy to receive a Ukrainian Cossack. This was witnessed by Piddubny’s colleague Mykola Razin, in his book “Half a Century Ago” (“Half a Century Ago”) telling how they came across a large group of drunken Wrangel officers on the Kerch embankment.

“Two broad-shouldered healthy people acted on the hungry officers like a red hook on a bull. One of them, staggering on thin legs, approached us close and, contemptuously skinning, shouted:

– Eaten the snout, man! You need to shoot!

“What does the officer need?”

– What? Ah you, your hohlyatskaya harya! The officer laughed. “I need to make a hole in you.”

He pulled out a revolver and put the barrel to Piddubny’s chest. It was impossible to wait. He didn’t need to pull the trigger on his drunken head. Without hesitation, I hit the revolver with my left hand from the bottom up, and with my right hand I stabbed the officer in the jaw . ” A shot rang out, the bullet scratched Poddubny’s shoulder. Officers rushed to the athletes. “We beat them wherever possible. They immediately fell like sheaves and did not rise, – says Razin. – Ivan Maksymovych, realizing what it means to beat officers in such a place, shouted at the whole embankment: “Save me, good people! They are killing! ” And immediately he struck blows of such force that the officers’ bones crunched . “

For the USSR, the fighter, who was acutely aware of the Russification of the descendants of the Zaporozhian Cossacks in the Kuban, was an “invincible Russian fighter,” and for the Chekists, a “Ukrainian bourgeois nationalist.” After the Second World War, Ivan Piddubny literally begged, begging the authorities for financial assistance – not so much for himself as for his family. He was forced to exchange all his sports awards for bread one by one. When he hardly got out of bed and sometimes even went hungry, sensitive neighbors took turns visiting him and unnoticed leaving him a piece of bread. However, it was not difficult for Ivan Piddubny, but until his death no one put him on his shoulders – in all senses. When he passed away on August 8, 1949, almost all the inhabitants of Yeisk gathered him for the last time: Piddubny did not even have a suit in the last days of his life.However, on the tombstone on his grave in the Yeisk city park were carved:“Here lies the Russian hero . ” In 1988, unknown vandals, breaking the plate, made their adjustments to the epitaph, sticking paint on it “Khokhol-Petliurovets!” . The grave of the famous wrestler, already dilapidated, was restored under Soviet rule only after the Russian service of BBC radio reminded her of it.

A year before the occupation of Crimea, in the spring of 2013, representatives of the Crimean Charitable Foundation named after IM Piddubny was initiated to erect a monument to the legendary Ukrainian wrestler in Feodosia, as well as to perpetuate his memory in the name of one of the city’s streets. However, in September 2014, after the annexation, the plans changed: in honor of the athlete decided to name the square. Then in the Crimean mass media Piddubny is already mentioned as “Russian” and “our”.

On October 29, 2015, in Feodosia, on the initiative of the city local historian Konstantin Vinogradov, a memorial plaque to Ivan Piddubny was installed on the facade of the building of the Feodosia sea trade port. During the unveiling of the memorial, Vinogradov noted that in the Russian Empire Piddubny was known to everyone – from the janitor to the emperor, and in Soviet times in memory of him in the Gulf of Theodosia ran a steamer named after him. However, on a plaque in Feodosia are written the words with which Piddubny, according to researchers, during World War II responded to the proposal of the German command to go to Germany: “I am a Russian fighter, I will remain.” However, as already mentioned, Ivan Maksimovich did not consider himself a Russian.

In his book The Kyiv Circus: People, Events, and Fates, Ukrainian historian Mykhailo Rybakov recalls: “The Soviet government ignored and leveled national identity as such, creating a new, artificial nationality called the“ Soviet people ”. The communist concept of indifference to nationality meant that a prominent or famous person belonged to an official, dominant culture . “ Ivan Bezkorovainy’s circus family was also included in the “Russians”, in whose circus the wrestler performed in the Crimea, often touring later with the Kyiv circus. Thus, in the encyclopedias of the Soviet period, Ivan Piddubny, along with many prominent figures of Ukrainian circus art, was considered a representative of Russian culture. However, for Ukrainians, he is a compatriot by birth and spirit, and no one can cross this fact out.