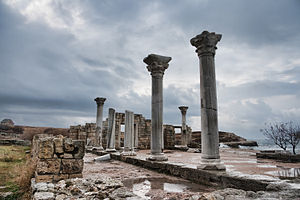 In August last year, Russian President Vladimir Putin decided to include the monuments and territory of the Chersonesos Tavriya National Reserve , located in the Russian-annexed Crimea, in the Unified State Register of Cultural Heritage Sites of the Peoples of the Russian Federation, to take the National Reserve into federal jurisdiction. and include it in the List of especially valuable objects of cultural heritage of the peoples of the Russian Federation.

The leaders of the Russian Federation defined Chersonesos Tavriya as a sacred place for Russian statehood, as the cradle of “Russian Orthodoxy”. Thus, the occupiers are trying to connect the history of Crimea and Russia. In fact, this appropriation of Ukraine’s cultural heritage by the occupiers is part of the Kremlin’s great-power game. This is an unsuccessful attempt to raise Vladimir Putin, the modern invader, to the level of the glorious Ukrainian Prince Volodymyr, the Baptist of Kievan Rus. By convincing ethnic Russians of the Kremlin’s actions, Russian propagandists are falsifying the historical fact that the Kiev state was quite influential even before Moscow existed. However, the baptism of Kievan Rus is radically different from the adoption of Christianity by the Moscow state. And the fact of the baptism of Prince Vladimir in Chersonesos,only confirms the closeness and connection of the then Crimea and Kyiv. For some reason, the leaders of the great-power concept ignored the facts of 1783: the barbaric destruction of the ancient Greek city by the Russian imperial army to build the fortress of Akhtiar, a military base of the imperial Black Sea Fleet.

There is a tendency to appropriate not only foreign lands, but also the glorious pages of foreign history – this is very typical of those who have always come to power in the Russian state. In fact, Russia’s political elite in general and Vladimir Putin in particular are seeking to embody the great-power idea. And politicians are trying to persuade the Russians of the rightness of their criminal actions, thus sowing enmity between fraternal peoples. After all, the modern Russian Federation has an imperial past, has imperial ambitions, which means that only in the “revival of the Russian Empire” will it have a great future. This is how the Russian authorities are trying to justify their actions against Crimea.

By appropriating Chersonesos Tavriya, the occupiers contributed to the escalation of the conflict, creating the image of a holy war for the “font of St. Vladimir.” Of course, this leads to the total heroization of Vladimir Putin in the eyes of most Russians, and the demonization of enemies, in this case, Ukrainians. Despite the fact that Chersonese did not play a special role in the formation of the Russian state and identity, the Russian president only justifies annexation and military action, arguing that “this is the spiritual source of the formation of a multifaceted but monolithic Russian nation and a centralized Russian state.”

Will the Kremlin’s attempt to link the history of Crimea with Russia be successful, ignoring Kyiv and the Ukrainian people? I think not. After all, ridicule of history, trampling on justice, permanent criminal policies pursued by the Russian Empire, the Soviet Union, and now their successor – the modern Russian Federation, have always led to the destruction of tyranny from within.