September 10 – Day of Ukrainian cinema. As in many spheres of cultural life, the role of Ukraine in the origin and formation of the Yalta Film Studio remains poorly understood in the film industry. Even today, this issue does not have special investigations in professional works, although, given the isolated facts, references and fragments of documents, this role is significantly underestimated. Therefore, the Day of Ukrainian Cinema is an occasion to highlight the silent pages of the domestic film industry, which, despite all the difficulties, had glorious moments in its history. 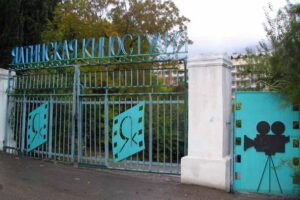 The year 1922 became a milestone, a breakthrough in the development of Ukrainian cinema. This year, the creative intelligentsia founded the All-Ukrainian Film and Photo Management (VUFKU), and Ukrainian cinema is beginning to assert itself as a separate branch of national art. VUFKU united the entire industry, including film studios, film distribution, film industry, film education and film press of Ukraine and (attention! – ed.) Crimea in the period from 1922 to 1930. It should be noted that VUFKU received the legal status from the Ukrainian Economic Council (Ukrainian Economic Council – a body that considered the reconstruction and organization of the national economy of Ukraine, drew up annual industrial plans, regulated export and import operations). That is, from the budget of the then Ukraine funds were allocated for the development of cinema and for these funds was, in particular,and the formation and development of the Yalta Film Factory. Moreover, more funds were allocated for the reconstruction of the Yalta Film Factory than planned, because after the earthquake of 1927 the material and technical base was destroyed, so it needed additional unscheduled funding. 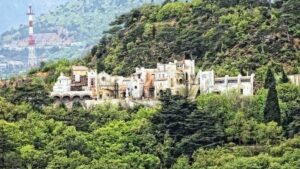 About 600 cinemas in Ukraine and the Crimea, as well as film factories in Kyiv, Yalta, and Odessa were transferred to the VUFKU. A natural question arises: why in the 1920s did Ukraine know and manage the base of the Yalta Film Studio (then the Yalta Film Studio was called the Second Film Factory of VUFKU)? But it is obvious that from the point of view of economy, geographical proximity, infrastructural efficiency… Crimea in one way or another had much greater ties with Ukraine than what some “historians” often claim today.

Thanks to the activities of the members of VUFKU, the Yalta Film Factory became a self-sufficient center, where it was already possible to make a film that fully met the needs of the audience at that time. Until now, there was no full-fledged film studio / film factory in Yalta. That is, VUFKU received from the Ukrainian Economic Council studios and film offices of Yermolev and Khanzhonkov in Yalta, and later in the Crimea there is a film factory.

VUFKU film factories are forming and thoroughly updating the material and technical base. It is the efforts of the members of the All-Ukrainian Film and Photo Management that the Yalta Film Factory has been qualitatively renewed and has not lagged behind other Ukrainian film factories. Researchers of the history of Soviet cinema emphasized that before the VUFKU the Yalta Film Factory was, in fact, not a factory, but a primitive, half-destroyed and robbed studio. It was reconstructed, filled with material and technical base and turned into a film factory. Thus, in the magazine “Cinema” contains an article entitled “At Yalta kinofabrytsi” which states: ” The factory has advanced filming and lighting equipment, utility company, expanded and equipped with the subject composition kinopratsivnykiv ends restructuring the laboratory, which has units novel .”

In the 1920’s, Ukrainian cinema gradually replaced foreign films on the film market, which had hitherto dominated the country’s television screens. By the end of the 1920s, the domestic cinematography had risen from scratch to the level of competitiveness and occupied a prominent place in world cinemas. Researchers of the history of cinema note: ” If we take the principle of self-financing as the only economic criterion, then in three years VUFKU becomes the second largest state film company in the USSR after Sovkino .” A wide range of Ukrainian intellectuals and, given the lack of professional directors, specialists from other countries worked on the success of this project. First of all, Ukrainian writers and theatrical figures, creative intellectuals of Ukrainian cultural centers took part in VUFKU projects.

Thanks to the efforts of Ukrainian figures, the Yalta Film Factory was known in Germany, Great Britain, France, the Czech Republic, etc., as screenings of Ukrainian films took place abroad. Moreover, the leading libraries of foreign countries received the magazine “Kino”, the pages of which reflected the life of Ukrainian cinema. The scale of the development of Ukrainian cinema at that time is demonstrated by a quote from the magazine “Kino”: ” All factors suggest that Ukraine, due to its natural, technical and material capabilities in the coming years will become a center of Soviet cinema». Significantly, in 1926 Ukraine became the second largest supplier of films to Germany after the United States. Films shot at the Yalta studio are in great demand in the world. VUFKU films are exported to the USA, Japan, Germany, Spain, France, Italy, etc., where they create a wide resonance.

Until 1926, when the Kyiv Film Factory began active work, the centers of Ukrainian film production were the Odessa and Yalta studios.

The most prolific director of the Second Film Factory was Vladimir Gardin. Significantly, in one of the films created on the joint bases of the First and Second Film Factories, “Ostapi Banduri” (1924), the legendary Ukrainian actress Maria Zankovetska last appeared on the TV screen. In her 70s, the actress played the role of the protagonist’s mother. Critics are unanimous that in this film M. Zankovetskaya’s play is quite natural and artistically motivated. It is obvious that, as in the theater of luminaries, in the formation and development of Ukrainian cinema there is a strong folklore stream, which in no way diminishes the quality of the then domestic cinema, which easily competed with similar films by French or German directors.
The independent development of the Ukrainian film industry did not last long, in fact until 1929. The era of the “shot revival” did not pass the cinema. In November 1930, VUFKU was reorganized into Ukrainafilm and subordinated to Soyuzkino, and soon ceased to exist at all.

The second film factory of VUFKU (Yalta) was transferred to the Vostokkino organization in 1928, which was created to eliminate low-quality films from the film market. Such films were then made by Chuvashkino and Nimkino. By merging these companies and including the Yalta Film Factory in their composition, Vostokkino was created. The purpose of this organization was to help the eastern republics in the formation and development of the film industry. The production of films was to take place on the materials of the history and modernity of the small peoples of the RSFSR.

Thus, the solid potential of the Yalta Film Factory, which originated in the line of Ukrainian cinema, was later wasted, and to preserve the Yalta Film Studio, the latter underwent about six sub-and subordination.