Have your own space…

Theater is a miracle, not like other areas of art. Any kind of art can be perceived alone – painting, music, cinema… There is a theater of one actor – but there is no theater of one spectator. Because theater is a social art. This, perhaps, is the solution to its enormous impact on society – despite, paradoxically, the fact that theater is the art of an almost exclusively large city. At least today. At least in our time. The theater does not collect stadiums – anyone can buy a ticket, but the theater – it’s good or otherwise – it’s not for everyone. For whom the theater, for whom the modern theater, as a theater, interacts (and should interact) with society and the state – about this and other things, about Crimea, about Kyiv and about Ukraine – a conversation with Halyna Dzhykayeva. 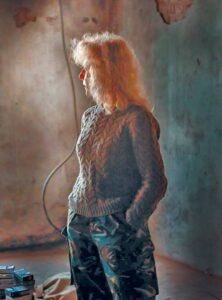 Halyna Dzhykayeva is a theatrical figure from Simferopol who was lucky enough to escape from the Crimean trap in the summer of 2014. Friends insisted – and in time. Maybe for a day, or maybe just for one night, her escape was preceded by a very, very probable arrest. Because even polite specialists of a certain department gently invited me to the interview, and some papers demanded to sign – the circle was clearly shrinking, and friends sounded the alarm. A colleague, director Oleg Sentsov – he was convinced of the incompetence of his public activities – because he “only” helped the families of our soldiers to leave – and he was arrested. Halyna said that they were, in fact, barely acquainted in the Crimea – theater and cinema are not the same thing, and the “parties” are different. We met in the early spring of 2014, when her theater provided facilities for impromptu first aid courses,to which Oleg also came .., which was eventually interpreted by the mentioned office as “terrorism”…

– Ms. Galina, your theater in the Crimea, it was…
– They were well known, first “Theater on Moskoltse” in Simferopol, then – theater-studio “MI”, then – art center “Pocket”. A month ago, the theater was to celebrate its 23rd anniversary. It didn’t work out. At the beginning of the summer of 2014, Karman tried to keep itself in the Crimea, several performances were tightened, and certain reorganization movements and steps were taken, but to no avail.

– Who was your spectator in the Crimea?
– Mostly young people, creative people, journalists… Without going into the details of the past, I must say briefly and say with conviction: the greatest asset in those 20 years – we have raised a generation of viewers who are not “padded”!

– Let’s return to Kyiv: how did you settle in Kyiv and why Kyiv?
– Friends, human rights activists helped us to survive the first difficult times, then we got into the program of international assistance – it was not superfluous, taking into account that all that I took out of the Crimea is the contents of one backpack. And it was designed for something else – in case of a sudden arrest… A year in Kyiv (and we did not consider other options – either Crimea or Kyiv) – and we have already launched a new project. On December 25 last year there was an unofficial opening, and since January PostPlayTheatre has been operating in Stary Podil – on Nyzhnoyurkivska. You see, theater is space. It is the theater’s own space, it is the “painted” walls, interiors, squares and volumes where performances, meetings, discussions, communication take place – it is necessary! Now this space is a rented former shop of a former factory, with a ceiling 11 meters high, where the roof over it completely flows… We have to do something about it,now we are raising funds for repairs through our pages on social networks. This is very important, but not the main thing. The main thing is that we have a spectator – young and not indifferent.

– And what does the rather unusual name of the new theater mean?
– “PostPlayTheatre” – “post-game theater”, as you can literally translate (there are other translation options, and they are also appropriate). That is, the theater itself and what happens to the spectator “after the game” are equally important here. The socially critical art that we work in this field is more than just a play. Our meetings with the audience should stimulate critical thinking; we ask controversial, provocative, awkward questions, the theater is a cause for doubt and reflection, and it is only natural that post play – after the play itself – a dispute begins – and God forbid that we go from that dispute to at least dialogue. 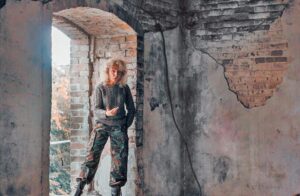 – Not so long ago – 200 years ago – there was another theater where the audience received, in addition to the pleasure of acting, and a lesson…
– Just not a “lesson”! Not didactics, it’s long gone; modern theater must teach a person to navigate from their own feelings, from their own opinion – not to believe. We ask questions so that people have to answer! We are “accomplices of the crime”: artistic. Provocateurs, yes. People don’t want to think – we help. It’s completely different: documentary theater. This summer, PostPlayTheatre has already shown the play “Militia” in Zaporozhye, Lviv, Kherson. where, by the way, the Tavriya National University, restored in Kyiv, is currently taking entrance exams for its future Crimean students.- now in September. Then – “Vamtutnedemokratia” (yes, in such a bizarre word) in Uzhgorod, Horishni Plavny and Mariupol – it is in those cities where the prototypes of the heroes of the play had to face live with bureaucratic arrogance. As for the plot of “Militia” – in its script basis is almost unbelievable, but real, on a dictaphone first secretly, and then openly, with the permission of the speaker, recorded by a random companion of the protagonist “spontaneous,” on the road “, a man’s speech , who went to kill in the ranks of the separatist “militia” just for money). So, – the director continues, – our audience is of the same kind as it was in the Crimea: young people, journalists, artists. In Simferopol, of course, our theater from the very beginning was also experimental, in the area of ​​the form of presentation of material, there were different formats… Artistic man,- this is her psychology – it is impossible for her not to speak the language of the present here and now! 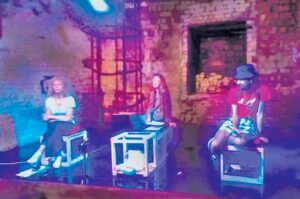 – How do you assess the prospects of your theater, and what about the place of your theater and the theater as such in the life of society and the state?
– The team is young and small – then we take the quality. We will not change the format, to please the situation – because it, look, entertainment shows are sold out – yes, people do not want to think – these are the consequences of spirituality. And the state is not interested in supporting the new, the young – and this is also a consequence. Systemic changes are needed, it is necessary to introduce a modern support system, through grants – a state grant program to support theaters, studios, repertoire… In this, the Ukrainian state lags far behind not only Europe but also Russia. Theater is not an abstraction, it lives together with society, where it is necessary, as in the state, to systematically change the basic attitude to culture.

– Does anyone help?
– We cooperate with the Republic Institute, the Ebert Foundation, help individuals, to whom we are sincerely grateful. In principle, we do not enter into contacts with parties, because we must be free from political involvement. The theater must find and have its own space, be in the rhythm of today’s life, it must be the changing breath of the present. Rhythms are different, intonations are different, language of communication is different, presentation of material… And the state should support artistic processes, support independent young theaters. In front of my eyes, through the theater, a new, conscious generation of citizens is being formed! Should the state stay away?

– How can we help?
– Come to our performances. Write more about us!