Ethnogenesis of the Crimean Tatars

The Crimean Tatar nation was formed over thousands of years on the territory of the Crimean peninsula, and therefore, on a par with the Karaites and Crimean Tatars, the Crimean Tatars are autochthonous. Taurus, Cimmerians, Scythians, partly Greeks from Miletus, Sarmatians, Bulgarians, Goths, Huns, Khazars, Pechenegs, Kipchaks (Polovtsians), Italians, Horde, Seljuk Turks, Adyghes (Circassians) took part in their ethnogenesis. For centuries, peoples came to the Crimea and assimilated with the local population.

There are endless debates and discussions about the origin of the Crimean Tatars. The firm belief that the Crimean Tatars were descendants of the Golden Horde, who settled on the peninsula in the first half of the 13th century, was firmly ingrained in the minds of many scholars. This myth appeared immediately after the annexation of Crimea by Russia in 1783, and has since become firmly entrenched in official Russian and then Soviet historiography and continues to be replicated in the scientific literature. The falsifiers took the events related to the Horde period as the starting point of origin of the Crimean Tatars, which, in fact, is only a stage of a centuries-old, complex historical process. 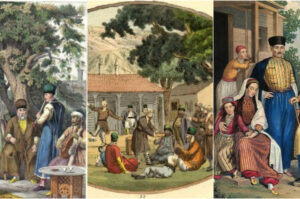 It is the brands that are known from the X century BC. BC, and became one of the main components of this indigenous people of Crimea. The Cimmerians, known from the 10th to the 7th century BC, have common family roots with the Taurus. e.
In the VII century. BC The most famous tribal union in ancient history, the Scythians, appeared in the Crimea. Unlike the Taurians and Cimmerians, the ancestral home of the Scythians was the Altai – the cradle of the Turkic peoples. There is an active process of interethnic interaction.

Then the Greeks from Miletus, Sarmatians, Bulgarians, even Roman legionaries, Goths, Huns, Khazars, Pechenegs, all of them come wave by wave at different times on the peninsula and take an active part in integration processes. They mutually enrich each other, while maintaining the features of their individuality. Thus, the Goths brought to the Crimea Arian Christianity, and with the advent of the Huns on the peninsula spread the faith and cult of the god Tengri. The blood of all peoples flowed harmoniously into the Crimean “melting pot”, which for millennia formed the Crimean Tatar ethnic group.
However, the Kipchaks, one of the many Turkic tribes, deserve special attention.

According to written sources, the Kipchaks were mostly fair-haired and blue-eyed people. The strange feature of the Kipchaks is that they were not assimilated, but assimilated into them. That is, they were the nucleus to which, like a magnet, the remnants of the Pechenegs, Bulgarians, Alans and others were attracted, accepting their culture.

Since 1299, the peninsula has been part of the Juchi ulus of the Great Horde. After that, both the conquerors and the defeated lived on Crimean soil peacefully, gradually getting used to each other.

Thus, from the XIII century on the peninsula were present almost all ethnic components, all components, in other words, the ancestors, of which only a few centuries later will form a new nation – the Crimean Tatars.

It is noteworthy that even before the emergence of the Ottoman state on the peninsula there are immigrants from Asia Minor. These were natives of the Turkic tribe, the Seljuks, who left traces of their stay in the Crimea. 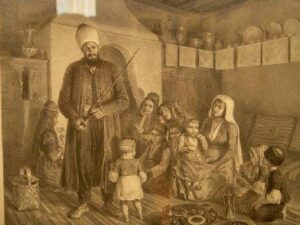 Speaking of the ethnic composition of Crimea, it is difficult to ignore the Italians. And to be more precise – the Venetians and the Genoese. Many of them took root here and eventually completely dissolved in the Crimean Tatars. Thus, the ethnogenesis of modern Crimean Tatars, in which non-Turkic and Turkic ancestors took part, has been quite difficult for centuries.