Ethnic mosaic of the peninsula: Greeks

The Greeks discovered Crimea five hundred years before our era. And it is the Greeks who can be called the first Crimean settlers. We look into the past and find in it the features of the present… 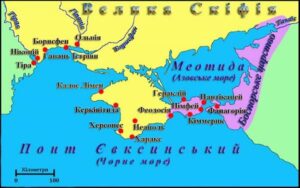 The Crimean peninsula has historically been a land of land for East and West, for Europeans and Asians, nomads and sailors. They came there and stayed there. Peoples changed the established way of life, changed their names, borrowed the cultural heritage of neighbors, adopted new religions. From there they later went out into the big world to enrich it with something new, generated by the Crimean land.

The Greeks were among the first inhabitants of the Crimean peninsula. In the relentless expansion of their ecumenism, they crossed the Black Sea, which they called the Inhospitable, and reached the shores of the Tauride. For hundreds of years, their polises existed alongside Scythian settlements. They were more and more different from the distant metropolis, they were more and more imitated by neighboring peoples.

Today’s Greece identifies itself mainly with Greece, but Greek culture has influenced the world and the course of historical events in much wider areas: from present-day Pakistan to North Africa – wherever Sophocles and Homer spoke, where the iron progress of hoplites was heard, where they are still found. in the land of Greek coins.

Since then, the fate of the Crimean peninsula has been inextricably linked with the fate of Greece – the rise and fall of greatness, its transformation and revival did not escape the Tauride. Greece, Macedonia, the absorption of Rome, and finally the Eastern Roman Empire, which in fact included Crimea. Crimean (and Azov) Greeks are divided into two subethnic groups: Urums and Rumeys. Both of these words come from the name of the Roman (Roman) Empire, which we used to call Byzantium. Thus, the Byzantine Crimean Greeks are much more than the Hellenic. Rumeian is more similar to Byzantine Greek than the language spoken in modern Greece. Urumka in general belongs to the Turkic languages ​​and is related to the Crimean Tatar.

Byzantium fell, disappeared from the map of the world, but left behind the islands of their cultures, one of which was in the Crimea. Greek, along with Gothic, was the leading language in the state of Theodore, which lasted quite a long time – several hundred years, until it fell under the invincible expansion of Turkey. Where did all these peoples, Goths, Scythians, Cimmerians go? Nations do not arise out of nowhere, and do not disappear into nowhere. Culture is not created in a flat place. Thus, the process of forming an ethnic community, long and complex, cannot be summed up in a few words. And it is not straightforward.

The Orthodox religion in the Middle Ages was often called Greek, and people who professed it could accordingly be considered “Greeks” with a different origin. In particular, written sources in the Crimea in the thirteenth century mentioned the “Tatars of the Greek faith.” But at the beginning of the next, fourteenth, century, in the Crimea, the dominant position was converted to Islam. In the Middle Ages, it was religious affiliation that was decisive, ethnicity was not given the weight it gained in modern times. When Christians became a minority in the Crimean Khanate, they became a separate community. Under such conditions, the Crimean Greek ethnos was formed in the fourteenth and eighteenth centuries. Should, say, the Urums be considered the indigenous ethnic group of Crimea and Ukraine? Let scientists argue about this. The Urums identify themselves with part of the Greek people,and at the same time – with the Ukrainian nation.

In 1778, Catherine II gave the Greek settlers in the Azov region a land area of ​​thirteen thousand square kilometers, equal to half the territory of the Crimean peninsula. Only more than thirty thousand immigrants left the Crimea, eighteen thousand of them were Greeks. Thus, in the steppe on the opposite shore of the Sea of ​​Azov there were settlements with Turkic and Crimean names: Mangush, Bugas, Cherdakly, Karan, Urzuf, Old Crimea and, of course, Yalta. An active propagandist of the idea of ​​resettlement, Metropolitan Ignatius received three thousand rubles for his services. The Russian government did not spare gold as a reward to the Crimean khan and his entourage. However, the settlers did not feel delighted with the new homeland and the established Russian order. After the annexation of the Crimean Khanate to Russia, many Crimean Greeks wanted to return to the Crimea,but the imperial authorities forbade them to do so. There were even riots.

From 1807 to 1859 there was an autonomous Greek district of Mariupol. It was later abolished. The ban on non-Greeks settling here was also lifted. Ukrainians and Russians began to inhabit this region. Mariupol has become a large industrial city, which it is to this day.

Not everything was easy, it was not easy to pull the roots out of the Crimean land and settle in the new land. Nevertheless, the Ukrainian land became native for the Azov Greeks. Not only Mariupol region, all Ukraine. We must not forget the Kyiv governor Fundukley, the founder of Kharkiv University Vasyl Karazin (his ancestors had the surname Karaji), the artist Arkhip Kuindzhi. Kharkiv designer of Greek diesel engines Konstantin Chelpan developed a B-2 engine for the T-34 tank. Ukrainian culture is impossible to imagine without the composer Ivan Karabyts, Ukrainian science – without a nuclear physicist, vice president of the NAS, Hero of Ukraine Viktor Baryakhtar.
Those Greeks living in the Crimea were also deported by Stalin in 1944 (although Greece was not on Hitler’s side in World War II, but on the side of the Allies). According to the census, only 3,000 ethnic Greeks now live in Crimea. In the Azov region – eighty thousand.

What awaits the Greeks of Crimea in the new realities of the peninsula? Let’s not forget history, it can teach many things to those who are able to draw conclusions from the mistakes of the past. For the great kings, the fate of individuals – and even individual nations – weighed little. This is a history lesson. And another lesson is that all the great empires that easily sacrificed nations and individuals perished, no kingdom was eternal.