Enikale Fortress is an eternal struggle with the enemy

More than a year has passed since Crimea was captured by the Russian Federation and a new illegal “government” was established on the legal territory of Ukraine. This is not the first year that Ukraine and Russia have been arguing with each other, deciding who is to blame and who is right, despite the fact that the truth is already on the surface. Crimeans suffer, and Ukrainians long for their homeland, for the places where they were born, and for the seascapes they admired.

The historical monuments of Ukraine located on the territory of the annexed Crimea are also “sad”. 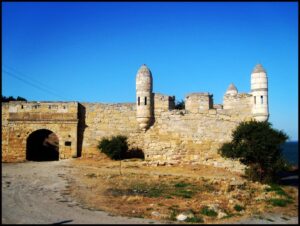 Ukraine is under threat of losing cultural values, which has been formed for centuries. In recent years, the media has been exploding with news that the Russian authorities have destroyed or appropriated another monument in Crimea, and the Russian Federation itself argues that this is another “strengthening” or “restoration” of a historic site. Currently, all cultural heritage sites in Ukraine are under threat, and this fate has not bypassed the famous fortress of Yenikale.

In January 2018, a partial collapse of one of the main monuments – the Yenikale fortress took place in Kerch. The Crimean Ministry of Culture states that there is no threat of significant destruction of the fortress. And what other explanation could be expected when the thief is not able to adequately understand the value of the stolen, so we have a barbaric attitude to cultural heritage in the annexed Crimea. What is the value of archeological excavations on the territory of the future route “Tavrida”, which are actually carried out by an excavator. Cultural monuments are simply not given a chance.

Even after the collapse, this was reported to “interested” agencies, such as the State Committee for the Protection of Cultural Heritage of the “Republic of Crimea”. The cause of the collapse was a small crack at the Black Sea gate in the arch, which caused several stones to fall. The management of the East Crimean Historical and Cultural Museum-Reserve assures that all possible measures have been taken to prevent further collapse of the fortress.

Yenikale Fortress, one of the historical monuments of Ukraine in the annexed Crimea, has a rich history. It is located on the shores of the Kerch Strait and was built by the Ottomans in the early XVIII century. Yenikale – from Turkish means “new fortress”. On its territory were: two powder magazines, a military arsenal, residential buildings, a water tank, a bath and a mosque. More than 800 Ottoman and 300 Crimean Tatar soldiers formed the garrison of the fortress, while it served as the residence of the Turkish pasha. 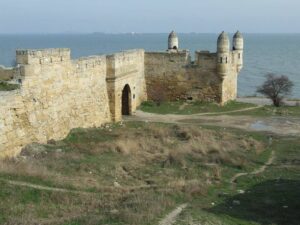 Enikale was of strategic importance to the Ottoman Empire, as it was located in the narrowest part of the Kerch Strait and was armed with powerful guns. It prevented the passage of Russian ships between the Azov and Black Seas. Even then, the fortress “knew the enemy in the face” and was able to “fight back.” But ironically, a few thousand years later, being incapacitated, the fortress was “captured by the authorities” of the Russian Federation, as it turned out, not for the first time. In the summer of 1771, during the Russo-Turkish War (1768-1774), the Russian army entered the Crimea, Yenikale was captured, and the Turkish garrison left the fortress.

By the beginning of the XIX century. Enikale lost its military significance, and in 1835 a military hospital was established on its territory, which lasted until 1880. Since then, the fortress has been completely abandoned.

Today, Yenikale is one of the sights of Kerch and Crimea, it has been granted the status of an architectural monument protected by the state. Despite the fact that in the second half of the twentieth century. a number of restoration works have been carried out, and now almost the entire fortress is in ruins. The best preserved gates, fragments of fortress walls and a bastion located on the coastal side.

Another dangerous circumstance is that a single-track railway branch runs through the territory of the fortress, leading to the Kerch ferry. The movement of trains has a detrimental effect on the fortress, vibration threatens the gradual destruction of the cultural object. Closing this branch will preserve the historical monument. But so far no one is paying enough attention to this, and Ukraine and the world are unable to intervene in this process of vandalism while Crimea is occupied.

This builds, that destroys… About the current state of the Genoese fortress

Genoese monuments of Crimea in the world context

Incredible adventures of the Genoese in the “originally Russian” Crimea

“High to God, far to the king, and Vorontsov died”