Every city has its own face. Of course, over time, it is covered with wrinkles or becomes completely unrecognizable: revolutions, wars, change of power and its tastes. And if in some cities we can see architectural monuments, in others, unfortunately, it is impossible.

For example, as in Kerch, which has almost not preserved the architecture of the XIX – early XX centuries. This was especially true of religious buildings: under Soviet rule, churches were ruthlessly destroyed, and so most churches in Kerch are modern. But all is not so bad, because pre-revolutionary leaflets have preserved the old Kerch for us.

The beginning of the twentieth century is called a real postcard boom. It was impossible to send postcards to each other in a fashionable way, and it was impossible to have your own photo studio and printing house, so the circulation was fantastic. In the Crimea, the most popular were the views of the South Coast, as well as Bakhchisarai. Kerch is less common on postcards of that time, although this material will be enough for us to compare the past and the present.

I’ll start with the fact that Kerch was much more compact than it is today. At the end of the XIX – beginning of the XX century the population of Kerch was not more than thirty thousand people.

On the map of the early twentieth century you can see that the entrance to the city was near Schlagbaumska Street (by the way, this is one of the few streets that has retained its historical name). We pass a barrier and find ourselves on Feodosiyska Street (today it is Pirogov Street). Literally 500 meters – and we are on Cathedral Square. We can say that this was the center, because here stood the main Orthodox church of Kerch – the Holy Trinity Cathedral, which is depicted on several postcards of the time.

The church was built in 1832, in 1845 a bell tower and a chapel appeared. On the card you can see that the cathedral was quite large – most Kerch residents came here for the holidays. Unfortunately, the Soviet authorities did everything to destroy it: in 1931 it was closed and the cross was dropped, and during World War II the temple served as a food warehouse. After the liberation of the city, the authorities decided to finally remove the cathedral, although it was not destroyed by hostilities. Today in its place is the building of the former branch of TNU. Vernadsky. However, a part of the cathedral is actually always in Kerch: the Obelisk of Glory on Mount Mithridates was built from the stones left by the temple.

The famous obelisk also became an occasion to destroy another architectural monument.

For a long time, Stempkowski’s chapel was the city’s calling card. The general panorama of the city did not do without the chapel on Mount Mithridates. Apparently, it was a favorite landscape of photographers and publishers, because in the postcards of that time we meet it very often.

The chapel was built in 1830 at the request of the mayor Ivan Stempkovsky, who wrote a will two years before his own death. According to historians, I. Stempkovsky did many good things for Kerch: during his leadership a school, a new pier, the Holy Trinity Cathedral were built in the city, as well as the same Mithridates stairs, which locals and visitors love to walk. Therefore, the chapel at the highest point of the city became a symbol of gratitude, and later – one of the most recognizable Kerch architectural objects of the turn of the century, which appeared on postcards. 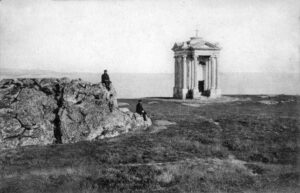 In 1944, an obelisk was unveiled on Mount Mithridates, so it was decided to remove the chapel. So now we have an obelisk towering over the city in all landscapes.

In general, there are few churches in Kerch, all of them for different denominations. In addition to the Orthodox, today the city has a church, mosque and synagogue, as well as Armenian and Georgian churches, a Baptist house of prayer. However, few people know that the city once had a German Lutheran church. It can be seen, for example, on a postcard with a picture of a barrier. Interestingly, the photographer sent his camera outside the city, because the German colonists lived on the outskirts.

The church was built in 1905 by the German community in Kerch. Its appearance is stunning: Gothic spiers can be seen from afar, but today the obstacle to such a landscape will be the fire department and the passport office, as well as residential buildings. During the war, the church became the headquarters of the German military commandant’s office. The dead German officers and soldiers were buried in the cemetery around.

Of course, after the war the church was adjusted to the needs of Soviet citizens: the crosses were dismantled, the spiers were removed and the Rodyna cinema was opened. In the 90’s, the “Family” was destroyed – everything was blown up for building materials, so no church, cemetery or cinema can be guessed at this place.

Could it be otherwise? Probably not, because the Soviets did not aim to preserve history and memory. So postcards are one of the few reliable sources that allow us to look beyond the screen of time and recreate the past.

Mosques of the south-east of Crimea in drawings and lithographs