Crimea presents the Turkic basics immediately after Perekop: Yani-Kapu – New Gate. Jan-koi: Nice village, although some researchers believe that “jan” is a steppe pronunciation of “yani”. Then Dzhankoy – New Village; but these are no longer basics, but subtleties. The nuances of pronunciation are sometimes controversial. Usually Crimean toponymy is unambiguous and clear: Kara-Dag – Black Mountain, Kara-tau – black top… And the Black Sea around the peninsula – Kara-deniz. White is scarce, except that Ak-kaya, White Rock, above the city on the river Kara-su, on the Black Water, and is called the ancient city that once saw Bohdan Khmelnytsky – Karasubazar, which is a “bazaar” should not be translated. 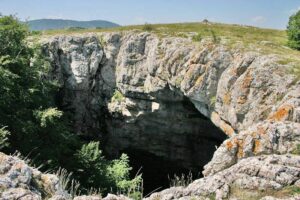 In the Turkish world, black is the water that flows from the ground, from springs, and white – ak-su – that which flows from mountain glaciers. Crimea has no eternal snows, so Crimean rivers are not called white waters. Crimea – colorful. Sari – yellow, the river Sari-su – a kind of Crimean Yellow Waters. Kok – blue, there is a rock Kok-tash, Blue stone, there is a whole “country of blue peaks” – Kok-tepe-el, Koktebel. Dogwood is red, there is Dogwood near Sudak, there is Dogwood near Yalta, famous for the world’s best wine “White Muscat Red Stone”. And the whole peninsula of Crimea is poetically called Yeshil-ada – Green Island. 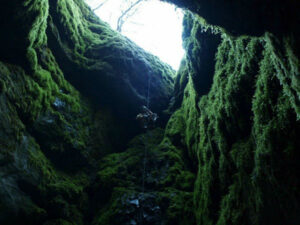 The mentioned Kara-su is completely called Biyuk-Karasu, ie the Great Black Water. Indeed, it is the deepest of the Crimean rivers. And it flows from almost a kilometer high, from the slopes of the massif called Karabi-yayla. Yayla – so called in the Turkic world mountain pastures, plateaus, covered with alpine meadows and small forests; a close equivalent is our word play. And what the word Karabi means is a mystery. Most likely, this name is from the same series as the surrounding untranslatable Tuak, Kanaka, Arpat, Kotur – the proper names of nomadic families, which assigned to them the corresponding Crimean places in their ancient travels.

Karabi-yayla is large, sometimes it is called simply: Yayla, without explanation, as the largest of the Crimean plateaus. At 113 square kilometers, there is only one village, Kurtluk, on the northern edge of the plateau, where natural forests are bordered by pine forests planted in the 1960s. The name can be translated as Wolf: a kurt is a wolf, but more often in the vicinity of an almost deserted village you can find a fox or a badger. Not deer and deer, but koumiss economy, which was famous for the district throughout the Crimea, its herds, gave rise to the legend of the Crimean Mustangs, who allegedly in the 90s grazed among the karst plateau dips. 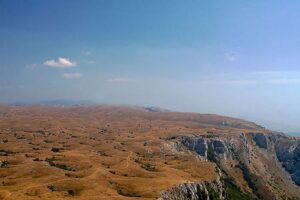 Yes, it is the caves most famous Karabi. There are many of them, no one can say how many. Several dozen are marked, have a steel plate shot with a dowel against a stone at the entrance, and its number in the state register is embossed on it. Most of these caves have their own names, mostly modern, such as the deepest Soldier’s or known for rock carvings Student. The names of the researchers are immortalized in the names of others: Kruber and Newman, Mamin and Dublyansky. And there is also Viola, who walks down the sloping cracks – “skinners”, there is a fairy tale, very small, it is from her well that beginners begin a speleological career Buzluk cave has long been known. Buz is ice; in a cave accessible without special equipment, it has been deposited since the ice age. 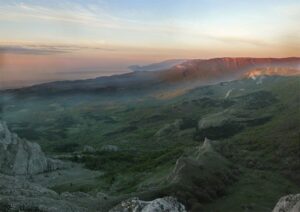 The Crimean mountains do not hold eternal snows, but on Yayla snow happens from the beginning of November and almost till May. And when it comes down – the southern nature quickly catches up with its own, in early June, fans bring fragrant strawberries from the mountains, then thyme with herbs… And where the flowers – there are bees. Kurtluk was once renamed the Bee, and wild bees still live in the area, creating stone hives just in the karst. 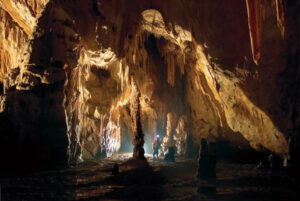 In the middle of that plateau there is a meteorological station, usually it is the starting or end point of speleological expeditions, amateur or student from geographical universities. More organized speleotourism is just beginning to be planned here. When there will be a sequel, it depends more on the course of world politics than on the efforts of businessmen in the entertainment industry.