Crimean Lavra: on the border of two worlds

Surrounded by the impregnable Crimean mountains, not far from the city of Bakhchisarai, in the gorge Maryam-Dere (St. Mary’s) is hidden a unique functioning Holy Dormition Monastery. The rocks around it are covered with greenery dried in the hot Crimean sun – an incredible work of pristine Crimean flora. 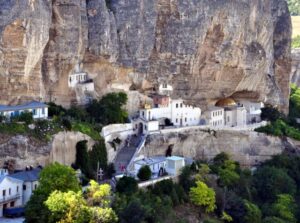 The question of the time of origin of the cave church of the Assumption of the Blessed Virgin Mary and the monastery itself remains open. According to one version, the monastery was formed by Greek monks, who in the VIII-IX centuries. together with thousands of Christians – supporters of iconoclasm – fled from Byzantium to freely profess the Christian faith. The first monks who settled here carved a temple and cell caves in the wall. The location of the monastery turned out to be interesting and advantageous: it existed as if on the border of two worlds – Christian and pagan. In the valleys near the monastery, archaeologists have found Christian cemeteries dating back to the VI century. These findings indirectly confirm this version: if there were Christian settlements, then the believers needed temples for worship. Christian settlements were neighbors of the pagan Alano-Gothic tribe.This allowed the first monks to engage in missionary activity, to carry to the local tribes the light of the Divine Revelation.

It is the period of VIII-IX centuries. dates back to the first vivid stories about the appearance of the miraculous icon of the Mother of God on the Assumption Rock. According to one legend, the icon was found on a rock by a shepherd named Michael, a local Mangup prince, who twice moved the shrine to his home, but the image miraculously returned to the rock. Realizing that the Mother of God wanted to leave her icon on the rock, people built a cave temple called the Assumption. According to another legend, the appearance of the image of the Mother of God on the rock saved the locals from a terrible snake that attacked people and cattle.

The earliest documentary mention of the monastery dates back to the XVI century. “Monastery of the Blessed Virgin on Salachitsa” – this is the name of the Assumption Monastery in the letter of Tsar Fyodor Ivanovich from May 27, 1596, which states that the emperor sent the brothers 15 rubles of alms. 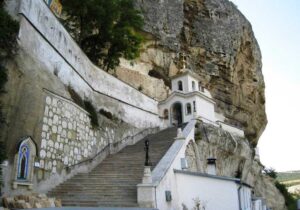 In the XI-XIV centuries, according to some researchers, the monastery was located in caves near the southern gate of the fortress Chufut-Kale, but after its capture by the Turks in 1475 it was moved to a new place. This version was supported by the famous Crimean researcher O. Berthier-Delagard, referring to manuscripts that have not survived to this day.

At the end of the XV century. the monastery became the residence of the Gothic-Kaf metropolitans and the center of Orthodoxy on the peninsula. The graceful power of the monastery was so great that it was revered not only by Christians but also by Muslims: they named the monastery Myrim-Anai (mother Maria), and the whole gorge where the monastery is located – Maryam-Dere (Mary’s gorge). Some Crimean khans after successful campaigns made rich gifts to the image of the Mother of God in the monastery.

After the revolution of 1917, the monastery existed for several more years. However, in 1921 the monastery closed the monastery as a “nest of the counter-revolutionary underground” and destroyed a large part of the church property. A labor colony of invalids named after Artem was established on the territory of the monastery. 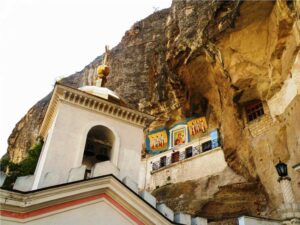 As a result of ignorance and indifference to historical, especially ecclesiastical, shrines in the first years of the new government, wonderful monuments perished: the churches of Saints Constantine and Helen, the Evangelist Mark, Innocent of Irkutsk and George the Victorious. By 1929, five temples and chapels of the monastery were dismantled, and the interior of the cave church of the Assumption of the Blessed Virgin was desecrated and looted.

The fate of the miraculous Bakhchisaray icon of the Mother of God turned out to be tragic. Taken out of the monastery by the Greeks in 1778 during their mass eviction from the Crimea, it was until 1918 “near Mariupol, Ekaterinoslav province, in the Church of the Assumption”, and then its traces disappear.

During the Second World War, the abandoned monastery again, as during the defense of Sevastopol (1855-1856), gave shelter to soldiers wounded in battle. In the military cemetery, next to the graves of soldiers killed during the Crimean War, new ones appeared, with red stars, – soldiers who liberated Crimea from fascist invaders. In the 1970s and 1980s, a psychoneurological boarding school was located on the territory of the monastery. 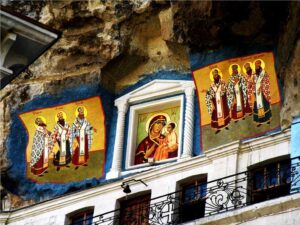 A new revival of the Holy Dormition Monastery began in 1993. Today, the cave Church of the Assumption and the stairs leading to the upper tier of the monastery and in the cell have been restored, the rock iconography above the balcony of the Church of the Assumption has been restored, and its dome shines with gold. And the road to Chufut-Kale, which is visited by hundreds of tourists every day, is enlivened by the ringing of its bells. 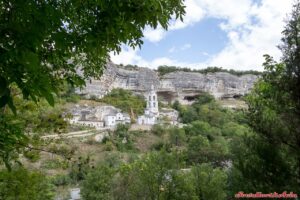 Incredibly beautiful place, majestic grace, fresh air, magnificent architecture – here, in the Holy Dormition Monastery, on the border of two worlds – Christian and Muslim, as nowhere else feels the so-called breath of history. No wonder this place is one of the most revered Orthodox shrines of the peninsula, which is also called the Crimean Lavra or Crimean Athos.