Over the last few years, the Crimean coastal cities have been massively building embankments. However, over time, they often either become long-term, or their construction halfway freezes. According to some local activists, this development is not to increase the tourist potential of Crimean resorts, but to satisfy the corrupt interests of individual officials of the occupying power. The famous Saka mud lake is no exception. 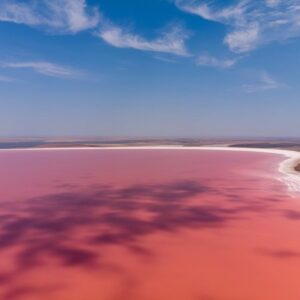 Today, the Saksky salt lake is the only one in the Crimea where mud is mined. Employees of the Saki hydrogeological regime-operational station (Crimean GGRES), which was established in 1926, claim that the silt sulfide mixtures of the lake are even superior to the mud of the Dead Sea. Thus, a comparative analysis of the content of biologically important substances in the healing mud of Saki Lake and the Dead Sea (according to Kharkiv University) showed that lipids in Saki Lake are 3 times more, vitamins – 7 times, amino acids – 2.5 times. It is due to the chemical and biological components of Saxon mud affects the multifaceted action of basic human functions and systems and is ideal for the treatment of injuries and diseases of the spinal cord and spine, central nervous system, female and male infertility.The emergence of the therapeutic mud of Lake Saka is associated with the period of formation of the lake itself, which is more than five thousand years ago.

Saki Lake consists of seven reservoirs, the main of which is the Eastern Basin, where therapeutic mud and brine (salt) are extracted, and the reserve Western Basin, where mud reserves are preserved. Mud is extracted from the bottom of the lake by barges, after which it is used for treatment in local sanatoriums and for the production of cosmetics, and Saxon salt – for baths or saunas or for eating. Dams on the water bodies adjacent to the lake protect it from desalination by flood and storm waters. According to Crimean scientists, at the moment this is the only exploited deposit of therapeutic mud and brine in the Crimea. The Eastern and Western basins retain all the features of a healing lake and have not lost their quality, but in 5-10 years these properties may be lost, as a set of measures is required to preserve them.

After the occupation of Crimea, the “new government” undertook to “modernize” the peninsula. This fate did not escape the resort town of Saki. In 2015, a project called “Health and Recreation” was launched, for which it was planned to allocate about 3.5 billion rubles, and they intended to implement it by 2020. This project provided for the construction of a 2.2 km long embankment along the medical Eastern basin, construction work began in 2016. The embankment was to connect smoothly with the 800-meter dam between the Kovsh pond and Lake Chokrak, the reconstruction of which began in 2017. 96.7 million rubles were allocated for design and survey works of the Saxon cluster, and 698.75 million rubles for construction and installation works.

According to the authors of the project, the arranged embankment, which never existed near the lake, was to become a modern facility adapted for people with disabilities, and thus increase the tourist attractiveness of the city. The project provided for the emergence of places for sunbathing, a specialized beach, bicycle parking, playgrounds, fountains, gazebos, benches, showers and other “benefits of civilization.” It was also planned to create a green area with a rosary, a children’s rope park and even a kind of historical installation. Do not forget about the shops and cafes.

Yugoslavstroydekor LLC won the tender, receiving almost 800 million rubles. It was responsible not only for the construction of the embankment along the shores of Saki Medical Lake, but also for the reconstruction of the road between Lake Chokrak and the Kovsh pond, dividing dams and Kurortnaya Street and Beregovoy Lane. Active work began in the spring of 2017, the facility was to be commissioned in December 2018, but construction was delayed. As a result, in two years the workers arranged a construction site, installed concrete slabs so that heavy machinery could approach the water, installed reinforcement and built a concrete wall. That’s all.

As it became known in the summer of 2019, the contractor did not cope with the task – did not hand over the object on time and left piles of construction debris in the city. Because of this, the city authorities terminated his contract and filed a lawsuit to recover 326 million rubles from PJSC “Moscow Industrial Bank” for the bank’s warranty obligations. The litigation with the contractor is still going on. As a result of the tender for the continuation of the construction of the embankment and other related facilities in October 2019, the Moscow company LLC “Architect” won, and the deadline was postponed to December 2021. 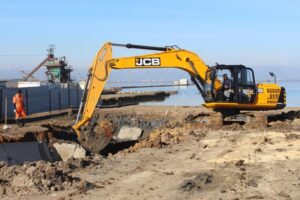 According to local residents, after almost two years of “reconstruction”, the shore of the lake became just a landfill, as all the construction debris from Kurortna Street was taken there by the former grief contractor. In addition, there were problems with the dam itself, which separates the bucket pond, into which the sewer flows, and the mud healing lake – it just falls apart. If this happens, feces will be added to the healing mud. This dam was “reconstructed” by the same Yugoslavstroydekor LLC. And problems with the sewerage system have already happened here – in November 2018, local environmental activists discovered an illegal discharge of sewage into the lakes Chokrak and Kovsh. However then in city administration declared that drains appeared because of breakdowns of collectors and illegal dumpings. In the summer of 2019, the sewer pipe burst again and the feces went to Chokrak. 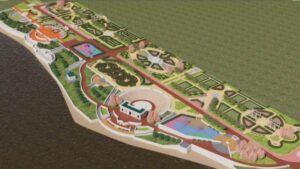 There are questions not only about the quality of work on the sites, but also their legality. According to public figures, Saki Lake, the mud of which is called the “black gold” of the Crimea, is simply killed by such construction. According to activists, the environmental expertise was not conducted during the approval of the project, in addition, the project itself completely changes the landscape, which contradicts the norms of the Water Code. The concrete in which the shore of the lake is wrapped goes three meters deep, and the depth of the mud lake itself barely reaches a meter.

The citizens are also concerned about the expediency and legality of such a building as a promenade with a cafe and a rosary. After all, according to environmental legislation, this cannot be done. The lake is a specially protected area with the first zone of mining and sanitary protection, where only storage structures can be built. According to them, neither in the Soviet Union nor in Ukraine, this lake was never built up. And now under the beautiful word “shore protection” construction is underway, but it all makes a terrible impression. For a small lake, these are grandiose changes that have already affected the microclimate.

According to activists, there is a scam all over the Crimea – embankments are filled with concrete everywhere, but at the stage of the retaining wall, projects stop: in all cities, contractors for some reason are dishonest. According to the leader of the movement “Stophlam Crimea”, which deals with the preservation of the ecology of the peninsula, Sergei Dubovik, there is a specific scheme: officials pay for projects for kickbacks. For example, 200 million rubles are transferred to the account of a construction company, of which 150 are returned as a rollback. Then the construction process is delayed, the contract is terminated, the contractor leaves, taking with him 50 million and leaving piles of garbage and concrete. And then there is the perennial litigation…

Saki Lake is the only deposit of healing resources on the peninsula. According to scientists, with a careful attitude to mineral substances, the inexhaustible potential of the “black gold” of Crimea will bring health to people for many centuries. However, the current situation around the lake is another clear proof of the indifference of the occupiers and their local servants to the natural gifts that the Crimean peninsula is so rich in. Their main task is to devastate this region, to destroy all its beauty and uniqueness.