The Convention Concerning the Protection of the World Cultural and Natural Heritage was adopted in Paris on 16 November 1972 at the 17th session of the General Conference of the United Nations Educational, Scientific and Cultural Organization (UNESCO). The document is based on the Venice Charter, which established professional standards in the field of material heritage protection and remains a program for professionals to this day. 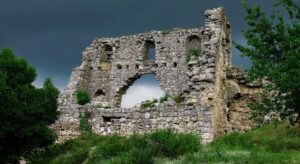 Independent Ukraine, as the legal successor of the Ukrainian SSR, a founding member of the United Nations and its specialized agency, UNESCO, recognizes the priority of universally recognized norms of international law over domestic law. Thus, as for other states, international conventions for Ukraine in the case of their ratification have the force of law.

The Convention Concerning the Protection of the World Cultural and Natural Heritage (hereinafter referred to as the 1972 Convention) was ratified by the Decree of the Presidium of the Verkhovna Rada of the Ukrainian SSR on October 4, 1988. Thus, the state undertook an international legal obligation to identify, protect and preserve , popularization and transmission to future generations of cultural and natural heritage, which is included in the UNESCO World Heritage List (hereinafter – the List or SHS), located on its territory. The purpose of the List is to protect cultural and natural heritage of exceptional universal value. The List may include both natural objects and cultural heritage sites, the main requirements for which are: integrity and authenticity.

In 1989, the so-called Preliminary List included 5 Ukrainian nominations of cultural heritage in the cities of Kyiv, Sevastopol, Chernihiv, Kaniv, Kamianets-Podilskyi and one of natural heritage (Askania-Nova). On December 7, 1990, the first object from Ukraine was entered in the SHS – the Hagia Sophia Cathedral with adjacent monastery buildings and the Kiev-Pechersk Lavra.

However, in the 1990s there was a long pause in this case. Only in 1998 the historical center of Lviv was included in the List (about 2500 objects from the XIII century to the 30s of the XX century). The monuments included in 1989 and forgotten for years were without movement in the Preliminary list, the next offer from Ukraine was recorded as early as 2000 – Sofiyivka Dendrological Park.

There was a certain revival in the late 2000s, when the role of the Ukrainian National Committee ICOMOS in this case was consolidated by the relevant provision of the Law of Ukraine “On Cultural Heritage Protection” and cooperation of public experts with ministries and government agencies, primarily with the State Service of National Cultural Heritage of Ukraine. . For 8 years, starting from 2005, four more nominations of cultural heritage have been made to SHS:
1) “Struve Geodetic Arc” (2005, cross-border nomination containing four Ukrainian sites in Katerynivka, Felshtyn, Baranivka, Khmelnytsky region and in Staro-Nekrasivka, Odessa region);
2) “Palace of the Metropolitans of Bukovina and Dalmatia, Chernivtsi” (2011);
3) “Wooden churches of the Carpathian region” (2013, cross-border with Poland);
4) “The ancient city of Chersonesos Tavria and its choirs” (2013).

In the Preliminary List, 16 positions are now allocated to Ukrainian monuments, which may be statistical evidence of the planned work of Ukrainian agencies in preparation for the regular sessions of the UNESCO World Heritage Committee, which raised the issue of nomination of the following sites. These are, in particular, the following objects:

1) the historical center of Chernihiv IX-XIII centuries. (1989);
2) the tomb of Taras Shevchenko and the Shevchenko National Reserve (1989);
3) the cultural landscape of the Kamyanets-Podilsky canyon (1989);
4) Askania-Nova National Steppe Biosphere Reserve (1989);
5) Sofiyivka Dendrological Park (2000);
6) Bakhchisaray Palace of the Crimean Khans (2003);
7) the archeological site “Stone Grave” (2006);
8) the complex of monuments of the Sudak fortress (2007);
9) Nikolaev Astronomical Observatory (2007);
10) astronomical observatories of Ukraine in Kyiv, Mykolayiv, Odesa and Crimea (2008);
11) St. Cyril’s and St. Andrew’s Churches as an extension of the nomination “Hagia Sophia with adjacent monastery buildings and the Kiev-Pechersk Lavra” (2009);
12) the historical center of the port city of Odessa (2009);
13) Genoese trade posts and fortifications – from the Mediterranean to the Black Sea (2010).
14) the cultural landscape of the cave cities of the Crimean Gothia (2012);
15) the historical environment of the capital of the Crimean khans Bakhchisarai (2012);
16) the building of the State Industry, Kharkiv (2017). 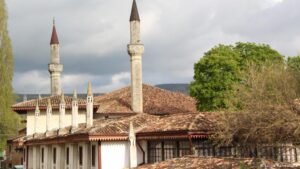 A preliminary extensive digression into the World Heritage List is needed to better understand the level of threats and risks of loss of cultural property in the occupied territories. At the beginning of the aggression of the Russian Federation in 2014 on the territory of the Crimean peninsula there were 6 objects of SHS – already mentioned Chersonese Tavriya and 5 nominations from the Preliminary list, namely: Bakhchisaray Palace of the Crimean khans (2003); complex of monuments of the Sudak fortress (2007); Genoese trade posts and fortifications – from the Mediterranean to the Black Sea (2010); cultural landscape of the cave cities of the Crimean Gothia (2012); historical environment of the capital of the Crimean khans Bakhchisarai (2012). That is, even purely statistically,according to dry arithmetic we have as a result of occupation 1/6 of losses from our share in SHS or even more – 1/4 from all total case of nominated objects (the main List including the Previous), or almost 1/3 from monuments of Ukraine, included in the Previous list! Without showing emotion, I would like to state the statement that for the indigenous peoples of Crimea, first of all for the Crimean Tatars, it is the loss of everything most precious.

Russia’s occupation of the peninsula has led to a loss of control over the monuments by the competent Ukrainian authorities and has made it impossible for both Ukrainian and international experts to access the site to monitor the condition of the sites.

One could hope for the activity of our state’s representatives in international organizations, but the official delegations at the annual session of the World Heritage Committee did not demonstrate this. At least in the open, there are no traces of relevant proposals from Ukrainian delegations to the agenda of both the 38th session of the Committee (2014, Doha, Qatar) and the next 39th (2015, Bonn, Germany) , headed by the First Deputy Ministers of Culture of Ukraine. 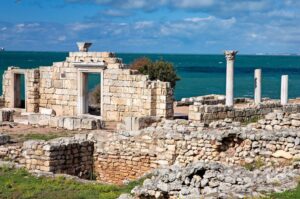 And in this case, the public did what the state could provide much more effectively. Monuments, museum community, activists of Crimean organizations provided information to the international community on the state of cultural heritage in the Crimean peninsula annexed by the Russian Federation, organized the adoption of relevant acts of UNESCO-associated international organizations – ICOMOS, ICOM, and Blue Shch.

In November 2014, in Florence (Italy), the 18th General Assembly of the International Council on Monuments and Sites (ICOMOS) adopted a resolution “Analysis of the state of cultural heritage in the Autonomous Republic of Crimea (Ukraine)”, which emphasized: “Ob ‘ cultural heritage sites in Crimea and eastern Ukraine – among them World Heritage sites – the ancient city of Chersonesos and its choirs, as well as other sites included in the Ukrainian Preliminary World Heritage List – are considered an integral part of cultural heritage Of Ukraine under the protection of the legislation of Ukraine “.

Also, “that the above-mentioned cultural heritage sites are under the protection of the 1954 Hague Convention for the Protection of Cultural Property in the Event of Armed Conflict, signed by both Russia and Ukraine.”

The ICOMOS General Assembly called on “the world community to unite all efforts and cooperate to protect Ukraine’s cultural heritage, given that harm to this type of heritage will affect the humanistic spirit of humanity and its cultural diversity” and called on the ICOMOS Executive Body to “work closely with UNESCO to monitor the situation in order to monitor the state of cultural heritage in these regions. ”

Unfortunately, the efforts of the public have not found understanding and support in the Ukrainian government. 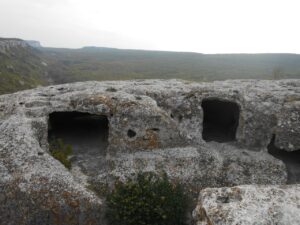 * * *
In the spring of 2015, without waiting for action from the Ukrainian government, the Ukrainian National Committee of ICOMOS initiated the inclusion in the List of Monuments under threat of two objects from the occupied peninsula – “Ancient city of Chersonesos Tavriya with choir” and “Bakhchisaray Khan’s Palace” ». Provided for in Article 11, paragraph 4, of the 1972 Convention.

Only the following year, 2016, at the 40th session of the World Heritage Committee (Istanbul, Turkey), attempts began to put the Ukrainian issue on the agenda.

We have to wait patiently for the bureaucratic procedures to be completed, and what was obvious to the narrow circle of experts at the very beginning of the Russian Federation’s war against Ukraine will become apparent to those who shape state policy on this issue and influence decision-making. in international organizations. And monument-guard experts are not accustomed to clearly manifest their position in the world about cultural objects located on the territory of Crimea, to mobilize all possible means and resources for their preservation, prevention of destruction and prevention of further losses.

Honorary President of the Ukrainian National Committee ICOMOS, Expert on Cultural Heritage of Ukraine
Share this

“Non-recognition policy. How to protect Chersonese from the occupier?”