Immediately after the seizure of power in the Crimea, the Bolsheviks began to build a new system of power. A telegram was sent to Moscow signed by the Commissioner of Internal Affairs of the Tavriya Provincial Committee of the RSDLP (B), requesting to send to Simferopol ” all legislative acts drafted by the RNA on the organization of all branches of government on the ground as guiding material for power in the Tavriya province. ” .

After the creation of the Republic of Tavrida, part of the Revolutionary Committees were abolished. Councils operated in counties and parishes, but their influence extended only to the Russian-speaking population. The vast majority of all orders of the new government were published exclusively in Russian, without translation into Tatar. Because of this, the Crimean Tatars had no idea of ​​the nature and content of the orders of the Bolshevik government, and could not carry out everything that the new government demanded of them. Therefore, many Tatars were arrested or even shot without understanding exactly what they were being punished for. It is safe to say that for the Crimean Tatars or representatives of any other non-Russian nationality, the new government was alien and incomprehensible. In his memoirs, P. Wrangel, recalling the results of the Bolshevik rule in the Crimea in the spring of 1918, wrote: “Although the nearby Tatar village of Koreizi also introduced the Soviet system and had its own state department, the Tatar population, deeply hostile to communism, adopted the external forms of the new government, in fact, remained the same .

There were frequent cases when the victors, representatives of the new government, killed Crimean Tatars in cold blood just because they were Tatars. And this did not happen during hostilities or uprisings, but during the relative stabilization of the situation. The event that took place in Yalta, when two traders, Crimean Tatars, Osman and Mustafa Veliyev, were captured without any explanation, is quite eloquent. They were taken by car to Livadia, where they were robbed and killed on the highway. ” The robbers were thrown into the vineyards. Osman Veliyev had several bayonet wounds and a severed bust, and his brother Mustafa’s head was shattered by butt blows. One of the killers, Merkulov, a Red Army soldier, answered the question of the sister of the slain, where her brothers, who were taken away, answered: “We killed them like dogs. ”

The Crimean archives contain many statements brought to the Bolshevik authorities by the inhabitants of the peninsula, trying to save at least some of what was taken from them during the so-called “searches” and “expropriations.” So, for example, in “the statement of the citizen Khalich KA” it was stated: ” The Red Army broke into my house, destroyed all the castles, dug up everything in the house and took away all valuables .” Another statement read: ” 11 tablespoons were stolen by the Red Army in our apartment. ” Another document listed in detail what the new authorities had taken during the “search”: ” In one apartment, a silver coffee set, a chain from the medallion and 10 rubles. in cash. And from another house – teaspoons, silverware, and money – 22 rubles .

The first persons of the new government did not stand aside from looting. For example, the chairman of the Evpatoria Revolutionary Committee M. Demyshev and his assistant V. Matveev took out of the house of a wealthy Tatar K.-A. Attara gold women’s watch, more than 2 thousand rubles in cash and many different “little things”.

By the way, looking ahead, when Evpatoria was occupied by German troops, they collected all the looted valuables and clothes that had not yet “walked” or destroyed by the Bolsheviks, and returned them to their former owners. The German command was able to satisfy 5 applications in full, and all the others – in part (many things disappeared forever).

In V. Obolensky’s memoirs there are quite eloquent words that emphasize the fact that the Bolsheviks often killed based solely on the class or national “affiliation” of a person. Thus, speaking of the arrival of German troops in the Crimea in April 1918, the prince, among other things, said: ” The Germans, with whom we fought for three years, our enemies, the conquerors of Russia, came here as our liberators. There is something infinitely humiliating about national feeling and national dignity. And yet, it was certainly so. The Germans are our saviors. After all, if they were delayed for a few days, the Bolsheviks would begin a raid on the Tatars and ruthlessly deal with them. We would hardly have survived this massacre. We would be shot not only as bourgeois, but also as friends of the insurgent Tatars, as traitors to Russia . ”

Simultaneously with the Tatars, all authorities in which the new rulers did not have an overwhelming majority, both old and relatively new, came under repression by the new government. On January 30, the military-revolutionary committee of Simferopol issued a decree (signed by J. Miller), according to which the Tatar Kurultai and the Council of People’s Representatives were declared dissolved. Numerous Crimean parties (from the Cadets to Millie Firk) were disbanded and their newspapers closed.

From the first days of their rule, the Bolsheviks began to fight for the “purity” of the revolutionary organs of the new government – the Soviets of Deputies. To this end, an order was sent to all the councils of the peninsula, signed by J. Miller, according to which ” all councils, as well as all land and military-revolutionary committees, whose composition was elected before January 26, 1918, must be re-elected as soon as possible, only in this case do they have the right to be represented at the congress of councils in the Tavriya province . ” At the suggestion of the Bolshevik faction, the Simferopol Soviet decided in late March to deprive all organizations that did not recognize Soviet power of representation: the Mensheviks, the Right Socialist Revolutionaries, the Bund, the Union of Provincial Zemstvo Employees, the Provincial Food Administration, and others.

The Bolsheviks and the former authorities were liquidated. So, on February 3 the Simferopol council declared the city council “anachronism” and dissolved it. The Alupkin council announced that it considered “possible and even useful to abolish city self-government as a body that slows down the work of the council.” By a decree of February 25, the Simferopol Military Revolutionary Committee abolished the county zemstvo assembly and administration as “hindering the path of broad social reforms for the organization of a new socialist life in the city.” By the end of March, all bodies of zemstvo self-government ceased to exist.

After the Bolsheviks seized power, they began a brutal massacre of political opponents from other political parties and residents of the peninsula who were of “bourgeois” origin. Initially, terror had a “class-spontaneous” character, but during the first half of 1918 it acquired organized, “revolutionary-expedient” forms. Outbreaks of red terror continued during the second half of December 1917 – the first half of February 1918, but the events of February 21-24 went beyond anything before.

During these days, Black Sea sailors decided to deal with “owners and anti-Soviet conspirators.” A member of the Sevastopol Soviet, the Bolshevik Ryabokon, declared: “The whole bourgeoisie must be shot. Now we have power, we are in power, so we kill them. What a revolution it is not to cut the bourgeoisie! ». The same mood prevailed among the sailors of the ship “Freedom Fighter”, who decided to “exterminate the entire bourgeoisie.” On all the ships were at anchorage in Sebastopol, was sent a telegram, which contained such a requirement: ” We must destroy the whole bourgeoisie and bourgeois intelligentsia, merchants, landowners, factory owners, priests, military officers, engineers, doctors, students, cadets, to pupils including». The words of the Sevastopol Bolsheviks did not disagree. According to archival data, on February 21-24, during this first wave of red terror, 600 people died in Sevastopol alone. In Simferopol, 170 people belonging to the “world bourgeoisie” were killed. 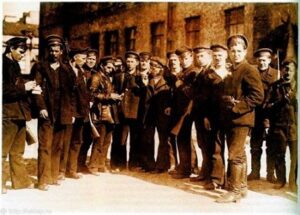 In reality, much more was killed than the “official” statistics show. For example, Officer M. Kryshevsky, a direct witness to those events, recalled that during that massacre in Sevastopol, only officers of at least 800 people were shot and stabbed with bayonets. And he didn’t even know how many other city dwellers were killed then. That is, the real number of those who died during these February days is very different from the “official data” and should be huge «

As noted above, it was during these events, which, incidentally, went down in Crimean history under the ambiguous name “Bartholomew’s Night”, that the first democratically elected Mufti of Crimea, former Crimean national prime minister Ch. There are now two versions of how he was killed. According to the first, which came from the mouth of his wife Sherife-khanum, he was shot on the night of February 23 in the yard of the Sevastopol prison, and then the corpse was thrown into the sea. The daughter of I. Gasprinsky – Shefik told about it in the memoirs: «I heard this from Celebidjihan-effendi’s wife: the prisoners were about to sleep. They were awakened. After the case was clarified, they got up and went accompanied by executioners. They stood by the wall surrounding the prison yard. They raised their heads and looked at the sky, and bullets pierced their backs, and they fell to the ground one by one . After that, Chelebiev’s body, along with others, was thrown into the sea. Sh. Gasprinska tells about it as follows: « At a meeting of parliament, it was decided to send a group of three people to inspect the corps thrown ashore near Sevastopol, in order to try to find among them the body of N. Chelebidzhikhan. This group included Abdi Effendi, me and another person whose name I do not remember. For some reason I was not able to go.Other colleagues went, they saw the bodies of the dead and were forced to admit that it was impossible to identify the corpses . ”

Meryem Ozenbashli called another version, the source of which were contemporaries and even witnesses of this tragedy – the brothers Server and Abibullah Hayri from Korbek. They claimed that Chelebiev was taken from prison to the seashore on February 23, put in a boat and killed after going out to sea.

The rampant terror and anarchy sharply intensified the political confrontation between supporters and opponents of the Bolshevik government. The Crimean archives contain a memorandum written by a representative sent from the center, A. Kanaki, to whom during February 1918 he inspected some cities of the former Tavriya province. As a result of studying the situation at the time, he stated that among the Crimean Tatars there is a “surge of separatist sentiments, because they expect support from Turkey.”