An ethnos that rapidly disappears

Among those ethnic groups whose history took place in the Crimea, the Crimean people occupy a special place. The name “Krymchaks” is an abbreviated version of the full name “Krymchaks-Jews”, which, in turn, is a tracing of the Crimean Tatar name “Yahudiler Kyrymcha” (“Crimean Jews”). In the second half of the XIX century. The term “Krymchaks” became the main term for this ethnic group in official documents (initially it was used to distinguish between local Turkic-speaking Jewish Rabbis and those Jews who began to settle in the Crimea after 1783) and only in the late nineteenth – early XX century he became an ethnonym. It was at this time that the process of ethnic self-awareness of the community came to an end.

From the history of origin 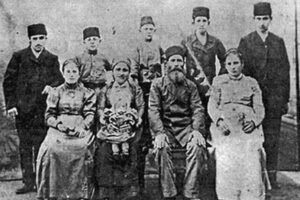 Researchers agree that the Crimean Tatars are one of the branches of the Jewish people that began to form and develop separately in the Crimea from the early Middle Ages. Historical monuments testify to the presence of Jews in the Crimea in the first century. N. During the Bosporus Kingdom, Jewish communities became visible in the Crimea and the surrounding areas. Thus, the Persian geographer Ibn al-Faqih calls the city of Samkerts (Tmutarakan, Taman Peninsula) “Jewish.” Kherson (as Chersonese was called in the Middle Ages) also became one of the centers of Jewish concentration.

During the Khazar rule, the number of Jews in the Crimea grew, primarily due to Judaism, which is popularized in the Khazar Khaganate, in addition, Jewish refugees from other countries began to settle here. Crimea’s trade opportunities became an important factor in the development of the peninsula in the thirteenth century, which, in particular, attracted Jewish merchants from different countries. Jewish merchants and artisans were mentioned in Italian documents and in the charter of the Crimean Genoese colonies. That is, Jews mainly settled in key shopping centers of the Crimea, such as: Kaffe (Feodosia), Soldaya (Sudak), Chembalo (Balaklava), Vosporo (Kerch) and so on. Moreover, in 1309 a synagogue was built in Kaffe. The economic development of the Jews in the Crimea contributed to their cultural rise. The book by Abraham Kirimi (ie Crimean) “Sfat Ha-Yemet”, “The Language of Truth”,1358) is the first original work on religious themes that has survived from the Jews of the Crimea.

Since the decline of the Genoese colonies, Crimean Jews have moved from coastal areas to the center of the peninsula. From the XIV century. most of the Crimean people lived in Solkhat (Old Crimea), and later in Karasubazar (Belogorsk).

During the Crimean Khanate, the Crimean community lived compactly in the eastern part of Karasubazar along the left bank of the Kara-Su River (until the beginning of the 20th century, this area was called the “Crimean side”). Crimean Rabanite and Karaite Jews are strongly influenced by the Tatars.

Significantly, at that time the occupation of the Crimean people was mediation in the ransom of Jews captured by the Tatars. Already at this time the differences between Rabbinite and Karaite Jews were obvious. Special words began to be used in the oral language of the Crimean Tatars to distinguish these communities. Thus, the Jewish rabbis were called “zyulyuflyu chufutlar” (Jews with paces), and the Karaites – “zyulufsyuz chufutlar” (Jews without paces). It is significant that at the end of the eighteenth century. Crimean Rabanites accounted for 25% of the total number of Jewish subjects of the Khanate (approximately 800 people), and Karaites – 75% (2600 people). Throughout its historical development, the Jewish community of Crimea has been constantly filled with Jews from other lands, who were attracted to the peninsula either by economic prospects or as a refuge from persecution.

Customs and traditions of the Crimean Tatars 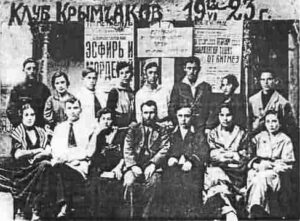 Crimean rabbis adopted from the Tatars a number of customs and traditions and already in the thirteenth century. became Turkic-speaking. The Crimean language is a variant of the Crimean Tatar language, the formation of which took place with the participation of Hebrew-Aramaic vocabulary and phonetics. The Crimean language is, in fact, an ethnolect belonging to the Kipchak group of Turkic languages. Nisim Levi Chakhchir, a Crimean author, called the language “Tatar.”

Monuments of written culture of the Crimean Tatars were “junks” (handwritten notebooks written in the Hebrew alphabet, which contain the main prayers and folklore texts (tales, proverbs, sayings)), a number of texts of business documents from the XV century, translations of sacred texts from ancient Hebrew. The main language of worship, business texts, epitaphs, scientific and theosophical works until the early twentieth century. remained Hebrew. In the 1920s and 1940s, the Crimean Tatars used Latin, and from 1945, Cyrillic.

Descendants of Jews who came to the Crimea as part of various waves of Jewish migration and consolidated in the fourteenth and fifteenth centuries took part in the ethnogenesis of the Crimean Tatars. around rabbinism – the current of Judaism, which professes the Old Testament and the Talmud.
In addition to the established Jewish religious and ritual systems, the Crimean Tatars developed a number of specific traditions. For example, the Crimean k’aal (the so-called house of prayer of the Crimean people) is oriented not to the east, like traditional synagogues, but to the south, like Muslim temples. Worship services are held twice a day: in the morning and in the evening. There are no chairs in the prayer hall, so believers sit on the blanket-covered floor, crossing their legs. Religious communities helped the poor, so there were no beggars among the Crimean Tatars.

The peculiarity of the Crimean people is also evident in the plane of life. Until the nineteenth century. polygamy was common. Patriarchate was the basis of the family until the twentieth century. The girls got married at the age of 13-16. Incest was allowed in marital relationships (for example, an uncle could marry a niece). Widows did not have the right to remarry, because, according to worldviews, husband and wife are inseparable even after death. In general, the life of the Crimean Tatars was very similar to the life of the Crimean Tatars.

A catastrophe for the Crimean ethnic group

Before the annexation of Crimea to Russia in the XVIII century. the Crimean community of Crimea was about 800 people. During the reign of the Russian Empire, the first blow to the Crimean Tatars. For example, in the XIX century. due to the economic downturn, the Crimean community is in a state of cultural decline. This is evidenced by the appeals of the Crimean Tatars to the Russian Tsar Alexander I, that among them there was not a single person who spoke Russian. Economic unrest caused by discriminatory Russian legislation against Jews is prompting Crimeans to seek a better place to live. In this way, the Crimean Tatars settled outside Karasubazar and created centers in Simferopol, Evpatoria, and so on.

During the years of Soviet rule, beginning in 1918, cemeteries and houses of worship of the Crimean Tatars were destroyed.

Since the 1990s, a large number of Crimean people have left for Israel. The largest community of English-speaking Crimean immigrants now lives in the United States.
At the beginning of the XXI century. There were 200 Crimean people in Crimea, only a few of whom had a Crimean ethnolect, and the religious tradition was almost completely lost.

Mysteries of the Crimean Jerusalem

What are the ruins at the Karaite sloboda silent about?