The reason for the meeting with the famous Ukrainian film director, artist and writer of Crimean Tatar origin Oleksandr Muratov was the exhibition of his works “My Crimea”. “My Crimea” is a whole collection of collages on the Crimean theme from works of the Crimean Tatar artists, personal photos, drawings, memoirs and family photos. The exhibition took place in June 2019 at the Ukrainian Cultural Foundation on Lipska Street in Kyiv.

“My Crimea” is not only the name of Oleksandr Muratov’s exhibition, but also the personal experience of the director, a Crimean and a Ukrainian by origin. The strongest works presented at the exhibition concern the most tragic elements of Crimean history – occupation, deportation, loss of authentic Crimean democracy Noman Chelebidzhikhan. 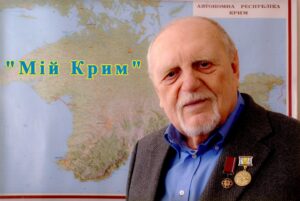 Muratov brings us back to history, to the memory of Crimea. He clearly divides the question of the existence of different peoples on the peninsula and, in fact, history itself. Peoples change, and history can be forgotten. In a world governed by progress, it is very easy for any nation to lose historical experience by simply turning into a media image. Therefore, collages deserve special attention, where we see the revival of the national spirit of the Crimean Tatar people in the late 1980s.

Politics, identity, memory – these are issues that one way or another can not be pushed somewhere in the backyard of consciousness, and understanding the depth of the roots of our land, we must jointly construct a new – better future.

– Mr. Alexander, I sincerely congratulate you on this exhibition. What feedback have you heard from people on it?
– It is important for me that so many people came and watched the exhibition. And go, and go… You know, some entries in the book of reviews make me very emotional. It was touching that Rustem Eminov was at this exhibition – here are copies of his works. I used his works in the collage, I really like them. It is a pity that Asan Barash is not there, I knew him personally well, he drew all the screensavers for the titles in each short story “Tatar Triptych”.

– Your exhibition opened a little later than the date of the Day of Remembrance of the Crimean Tatar Genocide, so you looked at this story as who: a philosopher, a thinker, an artist, a man, a citizen – a Crimean Tatar for a quarter? I know you made one of your films in Chechnya…
– I never made a film about the deportation of Chechens – then the war started, I had to start shooting two days later, on New Year’s Eve. It was terrible, this offensive, the Russians came. I thought that a nuclear war had begun. I was just in the city center, at the Caucasus Hotel. He interviewed old Chechens there. The Chechens were crying, and I was crying. 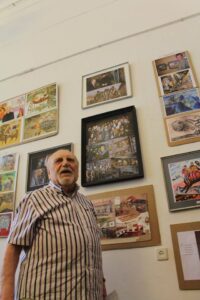 I know about my relatives who were deported from Karasubazar, and I take everything to heart. And the point is not that I am a Crimean Tatar for a quarter or a quarter… It’s just a terrible story.
When I am told, “The Tatars betrayed me,” I answer, “What did they see from the Soviet authorities?” In 1917 – the defeat of the Crimean People’s Republic – the most democratic formation of all time in the Crimea, and perhaps Ukraine. Then in 1919 he was shot again, then in the 1920s. Collectivization in the late 1920s and early 1930s. There is madness there. Northern Crimea at that time was still barren land, there were no canals, and everything was concentrated in the middle part, where the water was, and in the southern part. What kind of collective farms can there be! Why are there collective farms? Personal farms were driven to collective farms. Then 1937 – “Tatar nationalism”.

And the first deportation was, not surprisingly, in 1862, when the Russian nobles needed good land. However, they were more humanely evicted to Poltava region, given land, allowed to take cattle.
I don’t know why my relatives were evicted – Karasubazar is not by the sea, now it is Belogorsk. They were evicted, but not all, part of this large family remained. My great-grandfather served in the royal stables, and then Count Orlov took him to the Voronezh province. Here are the “eagle trotters”. He was in charge of the count’s stables, and when he became rich, he moved to Kharkiv and became a merchant of the Second Guild. He traded in oriental sweets and Crimean fruits, and rented out half of the house. We have a photo with a porch in the Tatar style.

– You were on the peninsula before the return of the Crimean Tatars, how did you see him without them?
– It was difficult for me… Imagine: 1949, I am fourteen or fifteen years old, my father and I come to Koktebel, my father is a famous poet. First arrived in Yalta, we ask if there are places in the hotel “Oreanda”? There are places, it was the beginning of summer, June. They look at the passport, and there is a surname – Muratov. And suddenly it turns out that there are no rooms, that those rooms are renovated. And a woman says: “But they will never settle you with such a name. Stay the night with me, and then go to Koktebel. ” 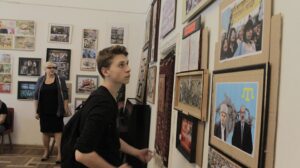 We arrived in Koktebel, I’m walking on Karadag, and a dinosaur is coming to meet me! His head arises from behind the hump… and it turned out to be a wild camel… A camel without a master. Tatars were evicted – camels remained, donkeys remained, goats remained, homeless animals. Terrible desolation. Only that writer’s sanatorium (Voloshin’s dacha) and “Medsantrud” – sanatorium across the road and all, no private houses.
Tatar huts were broken, because it was believed that the Tatars hid some valuables in the walls. Well, how could they hide something, when they were evicted not even at twenty-four o’clock, but at two o’clock ?! How could they dig and bury?

– Alexander Igorevich, in your opinion, what Crimean idea do we need?
– Non-national autonomy is nonsense. I suggested then, but you can’t force people: if the Crimean Tatars did not settle in Simferopol, where they mostly seized land, but in the Bakhchisaray and Sudak districts, they could have autonomy in Ukrainian times. And they settled as they pleased, seized the land, not always honestly seized, resold these lands. I took part in that famous “battle” in Partenit. Thanks to me, she stopped, because I was arrested, and when they found out who I was, they released me, of course. They called Kyiv and were told: “Let him go immediately and apologize.” And in front of me almost on his knees apologized to the head of the Crimean police.

– The Crimean People’s Republic was conceived as a commonwealth of nations… Why do we now say “national” and not “people’s”?
– Because the “people’s” has exhausted itself. At the expense of what the “Russian-speaking population” in Crimea was formed? At the expense of military retirees and their descendants. They are so sure there, their myth about Sevastopol, but in Sevastopol they shamefully lost the war, by the way. I do not understand what to be proud of.

– When interviewing Russian youth about who won the Crimean War, they get the answer that Russia won…
– It is laughter and sin, it is enough to read Tolstoy’s “Sevastopol Stories”. In Soviet times, this was not the case, and now only: Sevastopol, Sevastopol – a city of Russian glory, victory, victory, victory… Although Koshka and many others were Ukrainians, starting with Admiral Nakhimov.

– Yes, but what to do with Russia now?
– Nothing can be done with Russia. It is hopeless. As for Crimea, decisive measures are needed. Because they are now doing what we did not do, although I said in the government, and when I was at Yushchenko’s reception – and persuaded that peasants from Western Ukraine should be relocated to the Crimea. They would also grow grapes there. The water was then, the canal was held. The occupiers did what we did not do – relocated their own. And now there is an ethnographic collapse.

– Now we have very difficult relations with the Russian Federation, we have war, aggression, we have absolute rejection. How did this happen? How did we come to this situation in the relationship?
– How did you get there? .. But there was always such an attitude. Imperial thinking began in the days of Catherine II, and more.
I know exactly the meaning of Putin’s actions – not only to raise the rating, but also. The fact is that a country with territorial encroachments cannot become a member of NATO. He needed to set this precedent. It’s not about Crimea or those Donbas lands, for Putin the whole of Ukraine is a geographical misunderstanding.