Activities of the Crimean Bolshevik organizations in late 1918 – early 1919

When the Republic of Tavrida ceased to exist, there was no leading Bolshevik center left in Crimea. This was evidenced by Yuri Gaven.

April 20, 1935, during one of the many nights, the memories of old Bolsheviks and underground Crimea regularly held on the initiative of the Crimean Regional Committee of the CPSU (b), he said: ” When you study the history of the first Crimean underground, you will see that for the first months of German occupation in the Crimea was a similar situation. Local organizations have been established since June, but there was no regional management center. The regional committee was formed only in November 1918. Until then, local organizations (Sevastopol and Simferopol) had direct contact with Moscow – through me with the Central Committee of the RCP (b), and later with the Central Committee of the CP (b) U. The regional committee was created only when local organizations strengthened and established ties with each other . “

Beginning in the fall of 1918, the organization of the underground struggle in the Crimea was entrusted to the Central Committee of the RCP (B) by the Central Committee of the CP (B) U. For this purpose, at the plenum of the Central Committee of the CP (b) U, which took place in Orel on September 8, 1918, two special bodies were created – the Executive and Foreign Bureaus of the Central Committee of the CP (b) U. They were to direct the work of Bolshevik organizations in the occupied regions. During the Second Congress of the CP (B) U (October 17-22, 1918), 8 delegates from the party organization of the Tavriya Province took part in its work. Based on the general list of delegates who were present at the congress with a casting vote, we were able to establish the names of six of them: I. Morshin, S. Wolfson (Davidov), I. Shulman (all – from Sevastopol), Scherba (from Berdyansk), Tolstousov (from Melitopol district), Eiman (from Tavria). The other two names are hidden behind party pseudonyms,which the Bolshevik workers in the underground changed many times. Identification is also hampered by the fact that not all deputies indicated in their mandates where they were delegated to the congress.

At the October plenum of the Central Committee of the Communist Party (b) U, the Odessa regional committee was instructed to “travel around Crimea, help convene the Crimean Party Conference and provide all possible assistance to Crimean comrades, including money.” The IV Crimean Regional (Underground) Conference of the CP (B) U *, which took place on December 1, 1918, was attended by 24 delegates and a representative of the Central Committee of the CP (B) U, J. Hamarnyk. The conference decided to create a regional revolutionary committee to lead the insurgent movement and prepare for an armed uprising. In addition, the Crimean Regional Committee was established consisting of nine people: Peters (M. Gidalevich), M. Gershuni, I. Shulman, Lazar, Jan (Gamarnyk), Mykola (Timofeev), Shcherba, Mansarov and Marcus. 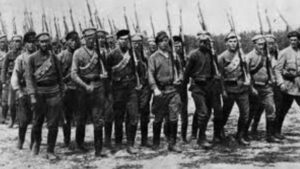 The composition of the regional committee elected by the congress began preparations for an armed uprising. He created underground organizations and armed guerrilla units, which were to carry out sabotage against the Anglo-French troops. The result of this work was discussed at the V Crimean regional (underground) conference of the CP (B) U, which took place on January 14, 1919.

It discussed field reports and current tasks of the Crimean organization. The conference elected a new composition of the Crimean Regional Committee in the number of seven people: I. Polonsky (Stepan), Beck (M. Zhuravlyov), Peters (M. Gidalevich), Solovyov, I. Shulman, Marcus, Shuster.
On March 16-23, 1919, the VIII Congress of the RCP (B) took place in Moscow. He adopted a new program and announced a course to build communism in the country. Considering the issue of Crimea, the Congress decided that the Crimean party organization is removed from the influence of the Central Committee of the CP (b) U and subordinated to the Central Committee of the RCP (b). This decision remained a written order for some time and was not implemented.

It is necessary to dwell on the question of the interaction of the Central Committee of the RCP (B) with the Bolshevik organizations on the territory of other Soviet republics. On March 21, at a congress meeting, Lenin stressed that the creation of independent republics — Ukraine, Latvia, Lithuania, and Belarus — did not in any way mean that “the RCP should, in turn, be organized on the basis of a federation of independent communist parties.” The Congress passed a resolution stating: “ We need the existence of a single centralized Communist Party with a single Central Committee that manages all the work of the party. All decisions of the RCP and its governing bodies are definitely binding on all parts of the party, regardless of their ethnic composition . ” That is, the Central Committee of the National Communist Parties enjoyed in the single RCP (b) the rights of “regional committees and were completely subordinated to the Central Committee of the RCP (b).”

The Third Congress of the CP (B) U took place on March 1-6, 1919. A representative of the Central Committee of the RCP (B) Ya. Sverdlov , who was present at the congress, said in his welcoming speech: The Central Committee of our party at the previous congress on the indivisibility, on the integrity, on the unity of our entire party, does not depend on how our old united Russia will be divided, regardless of how we will have to divide the former Russia to separate republics: Latvia, Lithuania, Belarus, Estonia, Ukraine. We realize that as a party we remain the only Russian Communist Party with different branches in one or another republic . “

In the spring of 1919, the Red Army began to occupy the territory of southern Ukraine. On the night of April 4, the 2nd Brigade of the Dnieper Division under the command of P. Dybenko went on the offensive at Perekop and occupied it. With the support of Crimean partisans and underground fighters, several regiments of the 1st Zadniprovskaya Division of the Red Army occupied Dzhankoi, Yalta, Bakhchisarai, Yevpatoria, and Simferopol during the first decade of the month. Crimean regional government ceased to exist…

D. Pasmanik believed that the decline in the second Crimean regional government was due to his “indecision”: ” The fundamental error of the Crimean government was that he wanted to recreate the wartime perfectly parliamentary system in the Crimea, which did neither Clemenceau in France or Lloyd George in England, not even the socialist Noske in Germany . “ P. Milyukov also believed that in the form of the rule of S. Crimea on the peninsula there was a” second birth of Kerenschina. “