A journey that has never been

Kyiv PostPlayTheatre is an underground theater. Crimean Room published an interview entitled “Have Your Own Space” on March 33, 2016, in which the founder, director and leading actress of PostPlayTeatr, Galina Dzhikayeva from Crimea, told the prehistory of her theater, vision of its prospects and place in the humanitarian space of modern Ukraine. 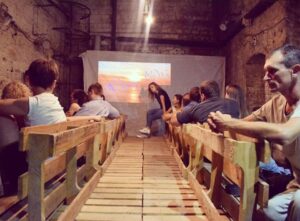 However, generated by the Crimea, the actual Crimean theme PostPlayTheatre did not touch immediately. He has already resonated with his controversial performances: “Militia”, “Identity Map”, “Tutvamnedemocracy”, “Gray Zone”… But they were not all about the Crimea.
Crimea, as a meaningful topic, was first presented to the public by the theater last September. As Anna Lyudnova notes in the Ukrainian Theater magazine: “In September last year, the first performance of My Crimea took place… Then the play received a lot of critical remarks from the audience. After all, Crimeans came to see it with their views on Ukrainian politics. Instead, the performance was rather intimate – the work was almost devoid of any political allegations.”

And taking into account the wishes of the Crimean people, the actors reworked the performance into a specific, but still a play called “My Crimea. A travel report that never happened. ” The premiere, to which many media outlets were invited, took place on May 16 – the theater thus wanted to restore interest in Crimea.

Impressions of the play are mixed. Intimate, almost like an “apartment”, the format was emphasized when receiving tickets, and then a strange arrangement of chairs – from our ubiquitous europalle made, bare brick walls of that bizarre room promised that the action will not be like an opera or operetta. Rather, it is closer to the ancient Greek tradition of theaters in small polises. What the Choir expresses in the ancient drama is spoken here in a controversial word to the audience by actor Anton Ovchinnikov, who has just hung noodles on the ears of a Russian customs officer (he is portrayed in this prologue by Galina Dzhikayeva, a play by two actors, and Galina is introduced to to play both himself and everyone else) about the purely sentimental motives of his voyage. But in reality he has a different, real, bizarre in a way, mission. Its meaning is that, being a dancer,he wants to dance 12 times under statues of Lenin in 12 different settlements of the occupied Crimea. This must be done before Putin enters the Crimean bridge. And then… Crimea… will return home! 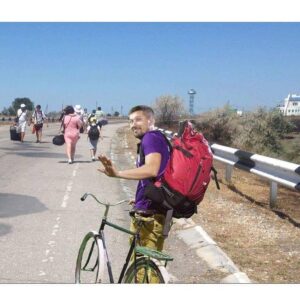 The actors themselves denied the opinion expressed by the audience in communication after the performances – “post play”, that they seriously believe in it. Because there is a close space of the play, where you can sincerely hope for such magic, and there is a wide space of the surrounding life, which for some reason mostly does not believe in miracles. Maybe that’s why there were no more political declarations in the play – unless we consider such a scene of a natural washing of the actor in the shower or in the middle of a full Russian performance, the actress suddenly reads the poems of Lesya Ukrainka – Ukrainian…

So, no matter what we are told about the national economy and other components of relations with Ukraine, but still Crimea – it’s almost exclusively memories of private life “Crimeans and guests of the sunny peninsula”, where the sea, summer and sometimes incredible, and often quite ordinary , pleasant memories. Politics is an external outline, and the extent to which these two categories are able to meet in real time is a question.

The play, of course, will not answer him. But it will sharpen, perhaps, the completely hidden interest in the Crimea, as another lost jewel of those ornaments that generously give people life.

So maybe we can do it? Isn’t bread essential? Here are the issues that are being discussed…

The play is in Russian, the language of the usual communication in the Crimea. There are different things: both bizarre, as in the classical view, modern dances, and memories of Crimean adventures from the time of free Ukraine, when Crimea was available as a room in the space of his own large apartment… 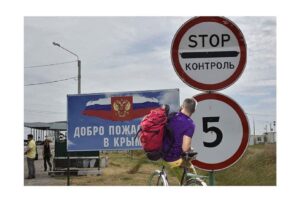 And the catharsis of the emotional finale is a painful story of the actress about her friend, a Crimean, who is now in Kyiv and whose hands are all scarred by fire. Because, fortunately for all Ukrainians, this distinction is “Whose Crimea?” – abstract: a healthy, strong man, unable to quell nostalgia, sometimes burns the skin of his wrist with cigarette pain, so that it does not hurt so much in the soul.

The play “My Crimea. A report on a journey that never happened ”has already been played twice in May, twice in June… So, there is hope that Ukrainian viewers who are not indifferent to Crimea will be able to take part in it in the next days of the 2018 theater season. After all, it is with this work that PostPlayTeatr and Black ORange Dance Production (this is their joint project) dream of now competing for the Shevchenko Prize.
Good luck!