445 meters above the level of loneliness

There are places forgotten by God and people that convey the course of history better than multi-volume textbooks. The big lies in the little things. For me, such a place was the village of Laki in Bakhchisaray district, which has long been marked on the map. 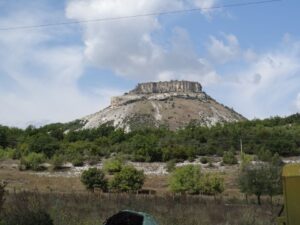 Among the gray stone peaks and sun-scorched earth stands a snow-white temple. His baths in the Byzantine style are not affected by the tops of the clouds, but the greatness of the temple is manifested in another: he saw a lot and persevered, despite all the troubles of the twentieth century. There is almost nothing around the temple, except for a few monastery buildings and the remains of an ancient cemetery.

These places remember the great migration of peoples, agricultural plow and heavy bunches of grapes. They tried to cover this land with ashes and fill it with blood. Lucky is not just a Greek village with a long history. It is a symbol of the complex relations between Crimea and the neighboring state, which is constantly interfering in the internal life of the peninsula. 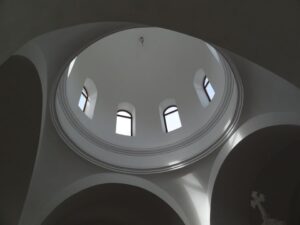 The village of Lucky was founded in the VI-VII centuries. N. BC and was part of the principality of Theodore. The Greek population of Lucky professed Orthodoxy, and archaeologists found the remains of more than ten churches in the vicinity of the village. For millennia they lived and worked here, prayed and died, believed in heaven on earth.

However, the idyll was destroyed. This first happened in 1778, when 31,000 Orthodox (Greeks, Georgians, Wallachians) were deported from the Crimea. The village of Lucky was emptied – 412 people left, six of whom were priests. But the problem was solved fairly quickly: instead of the Greeks, whose ancestors lived in the Crimea for many centuries, the Russian Count Alexei Orlov brought to the village of Greek officers from the detachment of Stefan Mavromikhali. As a result of the “replacement” Lucky retained the status of “Greek village”.

In 1904 the church of St. was built in Lucky. Evangelist Luke, and in 1914 there was even a Zemstvo school. And the twentieth century. became decisive for Lucky: in 1942 the Nazis completely destroyed the village by fire. As punishment for aiding the guerrillas, the Nazis shot 16 civilians and evicted the rest to the Biyuk-Onlara area. But the church could not be razed to the ground.

In April 1944, the village was liberated, and the locals gradually began to return to the ashes. Once again, fate played a cruel joke with the inhabitants of Lucky: on June 27 of the same year, the Crimean Greeks were deported to Central Asia and the Urals. And already on August 12 the resolution on resettlement of collective farmers on the emptied villages of the Crimean area was accepted. And very soon families from Orel and Bryansk regions came to Lucky. In 1948 the village was renamed Goryanka. And already in 1960 the village disappeared from the directory of administrative-territorial division of the Crimean region – this land with a peculiar mountain climate did not accept new lazy inhabitants.

Today there is nothing left of the village. The only mention of Lucky is the monastery of St. evangelist and apostle Luke, the highlight of which is the above-mentioned snow-white church. The temple was restored by the Greek community of Crimea. Here you can always find someone: abbot, monks, novices. They live near the temple, take care of the parish and gladly receive guests – travelers and pilgrims. 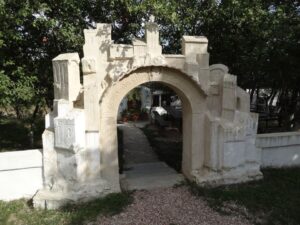 Getting to the monastery is quite difficult, but quite real. In the direction of the village of Verkhorichchya there is a bus from Bakhchisarai, which must pass the village of Bashtanivka and exit at the crossroads, and then turn right to the sign “Lucky 8 km”. Then you will rise. This path can be either taken by ATV or on foot, because the road is dirt. But the result is worth it: you find yourself at an altitude of 445 meters above sea level, surrounded by mountain air and memories of past centuries. Despite the tragic events, it is a place of extraordinary power. In it, it seems, is the essence of the peninsula – to be home to many and be alone.